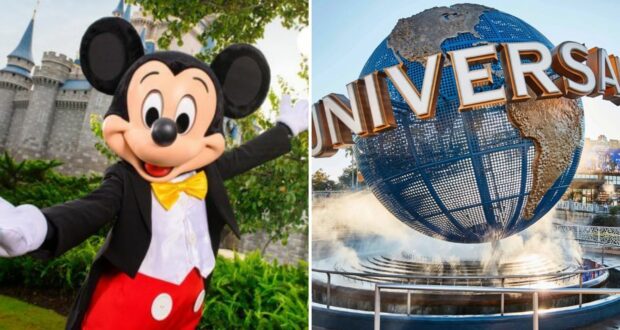 We previously shared the news that two special offers landed today for Walt Disney World Resort Guests. Guests can currently save up to $500 on a 5-night stay at select hotels. Another promotion allows for Annual Passholders and Florida Residents to save up to 25% on select Resorts. So, of course, Disney fans are jumping at the discounts which have been a challenge for the Disney website.

The Disney website currently has a long wait for Guests to access the promotions. Disney’s solution is putting people into an online virtual queue. The image you’ll see while you wait is of Space Mountain along with the words “We’re Almost in Orbit” as shown below:

So, what does this mean? Universal Orlando Resort is going to take the opportunity to make fun of the Disney giant! While only major Disney fans may catch the jab with “We’re Almost in Orbit”, there are some comments that are truly the best part of Orlando’s tweet!

Universal Orlando Resort (@UniversalORL) took to Twitter to throw a little shade Disney’s way with, “We’re Almost in Orbit” along with a photo of their newest roller coaster, Jurassic World VelociCoaster at Universal’s Island of Adventure:

So, let the comments begin! One person asked the question, “Wait 45 minutes to spend 3x on a hotel room or wait 45 minutes for Velocicoaster”, followed by someone else with the meme, “It’s True Tho”:

Another comment came to Disney’s defense with, “Hey at least they’re offering discounts (Looking at you annual pass hotel discounts for March)”:

This gif, saying, “Oh my God, was that shade?” seems rather suitable:

And even a Captain America gif was used with, “I understood that reference”:

Universal Orlando Resort throwing shade Disney’s way is nothing new and seems to happen quite regularly actually. While we will always be Disney fans first and foremost, we must say we are rather entertained when whoever runs Universal’s Twitter page throws a little humorous punch Disney’s way.

Would you have caught the “We’re Almost in Orbit” jab at Disney? Let us know in the comments!

2022-01-05
Jamie Sylvester
Previous: Walt Disney World is Hosting Auditions for Vocalists to Join the Voices of Liberty
Next: How Much Do Disney Fairy Tale Weddings Actually Cost in 2022?