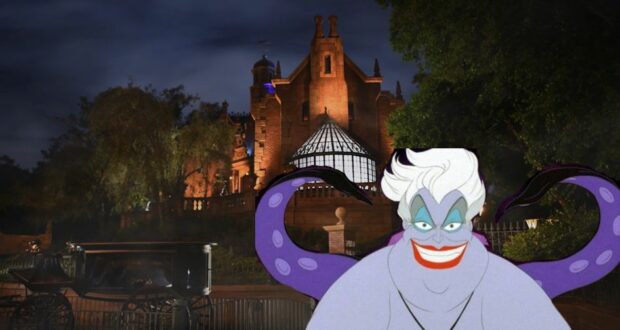 The Disney fandom is mourning the loss of the extremely talented Pat Carroll. While the name “Pat Carroll” may not be familiar to all Disney fans, does “Ursula” ring a bell? Carroll, the gifted voice of the iconic Disney villainous Sea Witch, is now taking over the Haunted Mansion.

RELATED: Target Is Selling a 6-Foot Inflatable Ursula, and We Want One!

Carroll was perfect for Ursula’s voice in the Disney animated classic film, The Little Mermaid (1989). She often said it was her favorite role during her tremendous career. Carroll sadly passed on July 30, 2022, while recovering from pneumonia.

And while we are missing Carroll, we’re thankful her voice lives on through Ursula.

So, how does this involve the iconic Disney attraction, Haunted Mansion? A Disney fan has replaced the disembodied voice of the Ghost Host as a private Haunted Mansion guide with Ursula’s voice within the mansion’s creepy stretching room.

@disneytiktok took to Twitter to post, “Ursula takes over the Haunted Mansion stretching room. A tribute to the late Pat Carroll 1927-2022.”

Check out the video of Ursula (Pat Carroll) as her voice takes over the stretching room:

Can’t get enough of Ursula’s (Pat Carroll’s) voice as the Ghost Host? Here’s a video of her presenting the full speech during 2013’s Spooky Empire convention in Orlando, Florida, as shared by @MisterJaredGray:

She was talented, indeed! It’s rather impressive that her voice could fill either Disneyland Resort or Walt Disney World Resort’s classic Haunted Mansion, and it would fit right in perfectly.

You will be missed, Pat Carroll.