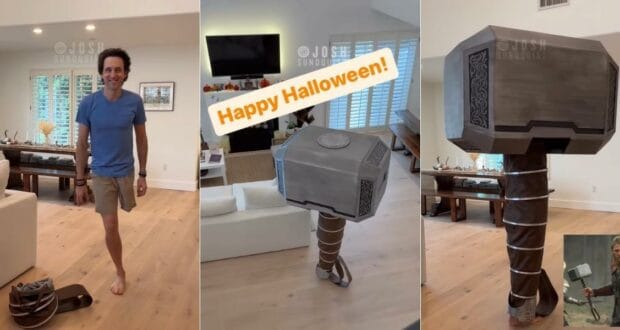 Halloween has come and gone, and with it, another round of interesting costumes. But before we close the chapter on this year’s spooky season, there is one costume story this writer feels is worth sharing.

John Sundquist, a comedian and Paralympian, makes the most out of the fact that he only has one leg, and his costume choices are proof of that. This year, he dressed himself up as Thor’s Hammer, Mjolnir.

Not only does Sunquist show us how he is able to take cosplay to another level, but he also shows off his balancing skills as he moves around so easily–sometimes even without the need for any support.

This is not Sunquist’s first costume. He has also used his situation to create other costumes, including Lumiere from Beauty and The Beast, The Genie from Aladdin, Tigger, Groot from Guardians of the Galaxy, and Pixar’s Luxo Jr.–A costume that he later turned into a real, working lamp.

Cosplaying continues to be a major hobby of Disney Fanatics, although no adults are allowed to visit any of the Theme Parks dressed in their best. While he is clearly doing it for the sake of comedy, one has to wonder how others use their unique situations to fulfill an epic Disney Cosplay.

Halloween Costumes 2022-11-01
T.K. Bosacki
Previous: EPCOT Roller Coaster Is Upgraded With a Bang
Next: Report: Thousands of Guests Locked in Disney Park Over ONE Covid Case