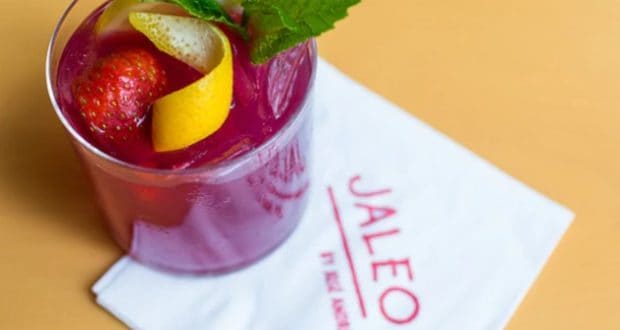 From the moment the doors first opened back in March of 2019, Jaleo has been an instant Disney Springs dining favorite, drawing in scores of visitors from all around. But that’s to be expected with its extensive menu of sizzling Spanish traditions and novelties alike, all crafted by a world-renowned chef and culinary mastermind, no less. From its stellar décor and style to its overall presentation of mouthwatering medleys, we’re simply crazy about Jaleo for innumerable reasons. Here are just a few of those very reasons.

8. Established by a internally famed chef

The Jaleo restaurant chain is the brainchild of internationally renowned chef José Ramón Andrés Puerta. A native to Spain, Chef Andrés has made a global impact on the culinary community in the United State, as well as the world over through an unending array of ways. From innovative cooking and dining concepts to humanitarian works, Chef Andrés has done it all as far as the industry goes. He even ranked among TIME magazine’s “100 Most Influential People” for the years 2012 and 2018 and was named the James Beard Foundation’s “Outstanding Chef” and “Humanitarian of the Year.” He is also the owner and founder of ThinkFoodGroup and World Central Kitchen, both dedicated to changing the world by food, often through disaster relief efforts. Other awards and recognitions attributed to this chef, who has proven himself dedicated on more than one level, include receiving the 2015 National Humanities Medal by the National Endowment of Humanities and achieving the milestone honor for being the only chef worldwide to have both two two-star Michelin restaurants and hold four Bib Gourmands in addition. In fact, one of those very Michelin star restaurants is the very one to also hold the aforesaid four Bib Gourmands.

While Jaleo in Disney Springs is not the first in the chain started by Chef Andrés (that honor goes to the Washington, DC location, which was established back in 1993) it is the largest one to date. Encompassing a grand total of 22,000 square feet in the West Side gives the restaurant plenty of space to work with, including a second story—a first for any Jaleo restaurant. As a result, your overall dining experience ascends multitudes in the way of perks and other onsite amenities, going above and beyond traditional dining. As it’s not only about the food, your complete dining pleasure is catered to in seemingly endless expressions presented through boundless options and opportunities. But we’ll get into all those details later on.

There’s a lot to be said about the style, overall décor, and bold choice in color scheme that makes up the restaurant, both internally and externally. While unconventional, the vibrant collaboration of orange, gold, and red tonal shades work well together in its interior for an unexpected teaming complement that succeeds at being upscale and sophisticated while still delivering on fiery fiesta fun. All the design elements that went into making Jaleo what it is today were intentionally chosen, with the earlier referenced hues getting inspiration from various citrus fruits. Another unique feature worth noting is the overall freeform organic outward design in building structure which, while attributed to the influences of Spanish expressionist works, is also most definitely inspired by none other than the artichoke—a fitting tribute to this celebrated vegetable native to Spain. Designer Juli Capella is credited with the creation, which features 41 golden pedals, no less. Other internal touches within the restaurant’s walls include whimsical decorations, elaborate murals, and plenty more in the way of traditional Spanish artwork.

It goes without saying that such an expansive dining designation would offer up a wealth of seating options to choose from. In fact, Jaleo has the capacity to accommodate more than 750 individuals at a time in both indoor and outdoor settings. So the decision is yours on whether you opt for open-air patio seating with family, friends, or a significant other or take to a single stool at one of the various bars. Other fun suggestions include larger tables with booths, smaller settings for two, and even unique repurposed foosball table seating! And while dining designations differ throughout the restaurant, Jaleo does not divide sections via physical wall barriers. Instead, the restaurant’s open concept design only splits sections into multiple spaces while remaining open and connected.

From multiple bar areas (including a tapas bar) to open performance kitchens, Jaleo has much to boast about in the way of in-house features. While it would be difficult to highlight all attributes, among one of the most significant is the resident fire pit for crafting house specialty paellas. While renowned for offering up the famed favorite Valencia Paella classic, Jaleo presents two paella varieties every evening—one comprised entirely of vegetarian ingredients, while the other features meat, seafood, and more traditional fillings. And on another interesting final note about Jaleo, you can shop merchandise related to the restaurant and Chef Andrés onsite as well.

While on the topic of unique in-house features, another attribute worth noting is the restaurant’s own resident cooking academy—Jaleo Academy.  Located in its own private sector upstairs, seating is limited to just 11 people at a time and is primarily used to book limited culinary events, exclusive demos, and other privately booked engagements, including special wine and sherry pairings.

Jaleo dishes out the works in traditional regional cuisine classics, direct from Spain. Just take a look at the epic-sized menu and you will find well over 60 enticing famed dishes and novelty specialties alike, all working to highlight the vibrant regional tastes and diversity of the chef’s beloved homeland. Something savory is sure to satisfy your personal tastes, whether landlocked or seafaring fare, plant-based or a combination of everything, plus so many other scruptious selections to choose from all ranging in plate size and pricing. And that’s not even including the decadent dessert features nor the indulgent drink delights, which extend to everything from specialty wines and crafted brews to cocktails, imports, and just about anything else you can imagine and then some.

While those who speak Spanish can tell you that the name bestowed on this establishment, “Jaleo” means revelry, you don’t have to know the language to understand the meaning once you step inside and see it all play out before your eyes. In living up to its reputation for delivering on a Spanish-founded approach to hospitality, family, and fellowship, Jaleo is a place known for community, compassion, and commitment for the fellow man. It’s more than just a dining experience where you get in to eat and then leave; it’s an all-encompassing and engaging experience where all feel warmly welcomed and invited to stay awhile. These are the guiding principles behind Jaleo—a place that, while distinctly Spanish in theme, embraces each and every community equally with the same model of service and hospitality at every one of its establishments. And nowhere is this more true than in its Disney Springs location, which is only to be expected as it is right in the heart of the most magical place on Earth.

Jaleo is one of the varying Disney Springs restaurants to participate in Disney Dining Plans. However, given its elite signature status, guests should note that the experience is worth two dining credits if you go this route. All the same, it will be entirely worth it! In general, Disney Springs is known for offering up a whole host of other exciting and enticing eateries all around, all varying in fun themes, service models, and prices. So while wherever you choose to dine will make for a magical meal, the experience Jaleo is sure to bring you will be among one of the most magical indeed!