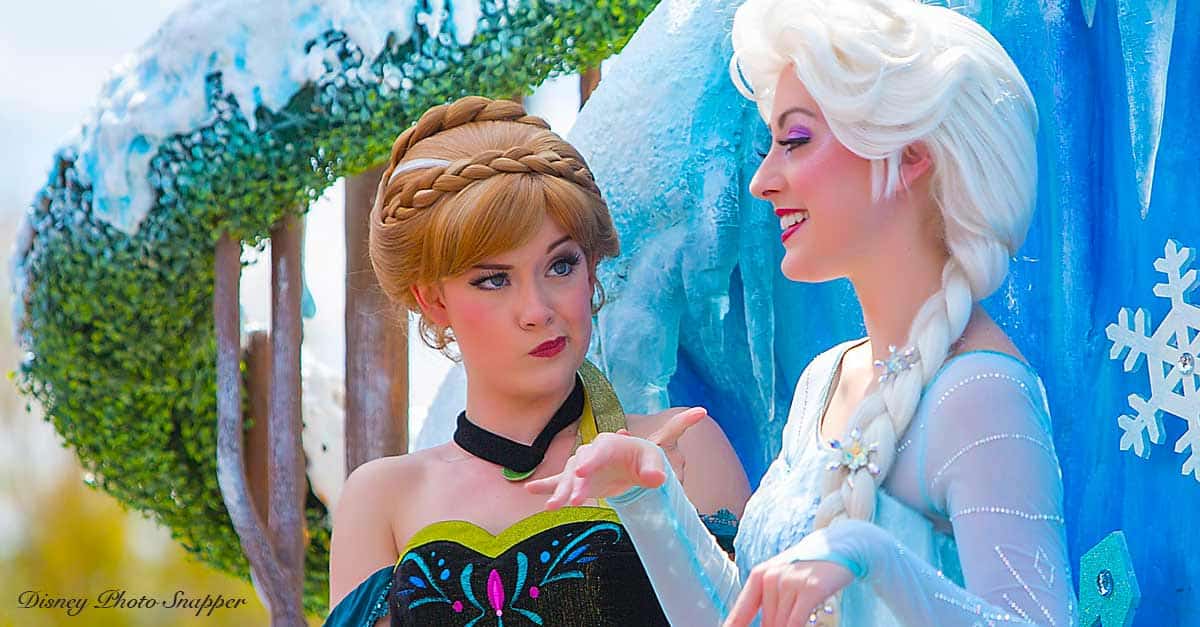 Disney’s coolest queen and her spritely sister make their rounds all throughout Walt Disney World, spreading fun “Frozen” folly wherever they go. If you want to meet Queen Elsa and Princess Anna live and in person, your very best bet is to head on over to Epcot’s Norway Pavilion, where they appear at their regular meet and greet location—their Royal Sommerhus. Over at Hollywood Studios you can join them and other characters from Disney’s Frozenpartaking in an interactive retelling presentation of the First Time In Forever: A Frozen Sing-Along Celebration. The sisters are also guest attendees at Mickey’s Royal Friendship Faire, which takes place right in front of Cinderella Castle at Magic Kingdom Park. They can also be seen riding along the parade route on their own float during the Festival of Fantasy Parade.

It cannot be denied that this leading lady princess from Disney’s Aladdinis in many ways even more popular than the film’s title character. So much so, in fact, that Princess Jasmine is even counted amongst the many must-see Disney Princesses that park visitors seek out for meet and greet photo ops each year. Fortunately there are several places to find her at all throughout Walt Disney World Resort. In Epcot you will find her at home within the Morocco Pavilion near the marketplace and Restaurant Marrakesh. She also sometimes appears as one of the rotating Princesses featured at Akershus Royal Banquet Hall, also in Epcot. Over at the Magic Kingdom you will find her and Aladdin granting wishes for excellent photos and meet and greets at the Agrabah Bazaar within Adventureland. She’s also frequently featured at Cinderella’s Royal Table. And if you’re at the park when it opens you will also see her on the Castle stage for the Let the Magic Begin welcome show. Then, over at Hollywood Studios you can catch her making an appearance in Fantasmic!

Merida, one of the more recent Disney Princesses, is another popular pick for meet and greets among Walt Disney World Resort visitors. This flaming red-haired archery-loving spitfire from the Disney·Pixar hit Brave can be found at Disney’s Fairytale Garden, located within Magic Kingdom Park. Here she leads in meet and greet opportunities as well as a little fun-loving play and guest interaction. Merida also demonstrates her unswerving fearless each day during the Festival of Fantasy Parade, in which you will find her riding along the procession from atop her very own float. She is also part of the welcoming crowd of Disney friends at the Let the Magic Begin Show for Magic Kingdom Park’s daily opening.

A recent addition to Disney Princesses appearing on the big screen is Moana, the young ambitious Hawaiian beauty featured the film named for her. In the past Moana has made live appearances at Walt Disney World Resort, at one time even mingling with guests at Hollywood Studios within Animation Courtyard. She is also sometimes a specially featured meet and greet character at Magic Kingdom Park, appearing during special ticketed events. But for the moment, Moana does not have a permanent character spot or regular appearance schedule at any Walt Disney World Resort location, though this well may change in the future. For now, the only way to see Moana live and in person is by catching a nightly production of Fantasmic! at Hollywood Studios in which she appears in the boat scene montage alongside many other Disney “good guys”.

Rightfully considered the first American princess of all the Disney Princesses, by both her actual historic basis, as well as the release date of Disney’s 1995 film Pocahontas, this title character remains one of the harder-to-find characters within Walt Disney World Resort. Yet she does have her very own permanent meet and greet character location nevertheless. You will find her over at Disney’s Animal Kingdom on location of the Discovery Island Trails, ready to meet and mingle with visiting fans. You will also find Pocahontas in the nightly Hollywood Studios productions of Fantasmic! where she plays an important part in her very own segment and can also be seen during the boat montage with other memorable characters.