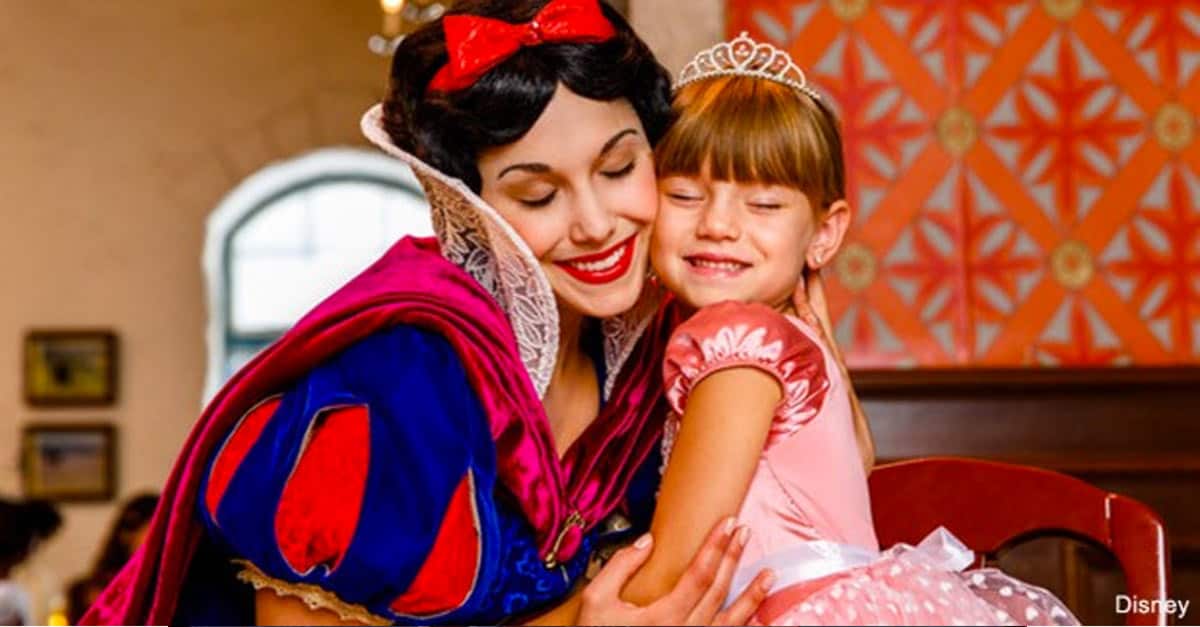 Since emerging onto the scene back in 1998 in the Disney animated film of the same name, Mulan has become a fierce favorite addition to the growing lineup of Disney Princesses. Mulan’s character origins are loosely based on and inspired by the legend of Chinese warrior Hua Mulan, as depicted in the Ballad of Mulan. As she is another somewhat harder-to-find character, your very best bet for locating her is to head to Epcot’s China Pavilion, where she appears live and in person at various times of the day for guest meet and greets. Also, while not a regular on the Akershus Royal Banquet Hall roster, Mulan has been known to pop in for Princess Storybook Dining here from time to time as well.

Rapunzel, star of the 2010 Disney hit Tangled, is another popular fan favorite amongst the Disney Princesses. And now that she’s left her tower and is on the loose, you’ll find her making rounds all throughout Walt Disney World Resort, at many different locations. While you aren’t likely to find her at the barbershop anytime soon, one of your best bets for locating her and all 70 feet of her golden hair is to head on over to Princess Fairytale Hall within Magic Kingdom Park for meet and greets. She also partners with The Little Mermaid’s Ariel and Eric, as well as her own leading man, Flynn Rider, for the Bon Voyage Adventure Breakfast at Trattoria al Forno at Disney’s BoardWalk each morning. There are plenty of other ways to see Rapunzel live and in person as well. For instance, you will spot her riding along on her own float during the Magic Kingdom’s Festival of Fantasy Parade. She is also part of the Mickey’s Royal Friendship Faire production on Cinderella Castle Stage. And if you are fortunate to arrive at Magic Kingdom Park at opening time you will catch her on stage during the Let the Magic Begin welcome show as well.

Snow White is the original iconic classic Disney Princess—appearing in Walt Disney’s first feature-length animated film, Snow White and the Seven Dwarfs, back in 1937. So it’s no wonder that this timeless favorite is a Disney World staple and a popular princess pick to come and seek out. The good news is that this fairest maiden of them all can be found at multiple locations within Walt Disney World Resort, making the possibility for live, in person meet and greets that much easier. Her primary character greeting post is at her wishing well, located within Epcot’s Germany Pavilion, where she appears at select times throughout the day. She also likes to join in with Princess Storybook Dining at Akershus Royal Banquet Hall, also in Epcot. Over at the Magic Kingdom she also likes to grace diners at Cinderella’s Royal Table with her warming, kindhearted presence. And over at Artist Point, at Disney’s Wilderness Lodge, you can meet her and other characters from the beloved film Snow White and the Seven Dwarfsduring a recently added Storybook Dining dinnertime engagement. Snow White can also be seen marching along during Magic Kingdom Park’s Festival of Fantasy Parade and is also one of the welcoming friends on stage for the Let the Magic Begin opening show. You will also spot her during nightly Fantasmic! presentations over in Hollywood Studios.

Sofia the First is another more recent addition to the list of Disney Princesses, and one that older fans may still be largely unfamiliar with. She appears on the Disney Junior show named for her and is, by all accounts, Disney’s first and only mainstream juvenile princess protagonist. Nevertheless she is still a Disney Princess, and one that many of Walt Disney World’s youngest guests yearn to see. For this pursuit, your best bet is to head for Hollywood Studios where she makes appearances alongside other Disney Junior Pals in Animation Courtyard. She is also one of many characters that likes to attend Hollywood & Vine’s Disney Junior Play ‘n Dine breakfast buffet, in which each meal assures personal character meet and greets and one-on-one table visits, in addition to restaurant-wide camaraderie and fun to go around.

Tiana, from Disney’s The Princess and the Frog, is a more modern times-based Disney Princess, hailing from early 20thcentury New Orleans. The 2009 film release, in which her character was first introduced onto the scene, created somewhat of Disney Princess revival in popularity that paved the way for others who have since followed in recent years. As an aspiring chef with big dreams of owning her own restaurant someday, Tiana knows how to cook up fun and adventure all throughout Walt Disney World Resort, satisfying the appetites of fans who crave for excellent character experiences in which to see her live and in person. For a guaranteed personal one-on-one meet and greet opportunity just head on over to Princess Fairytale Hall within Magic Kingdom Park where she and Rapunzel join forces in shared interactive guest visits. You can also see Tiana don some jazzy clothes and keep the beat with New Orleans-style music on stage during Mickey’s Royal Friendship Faire. But she appears in her more familiar elegant gown when she and Prince Naveen take to their float during the Magic Kingdom’s Festival of Fantasy Parade. Tiana is also one of Mickey’s many friends joining him on stage with welcoming warm wishes for the Let the Magic Begin opening show. Over at Hollywood Studios you can also catch a glimpse of Tiana in the boat scene during Fantasmic!


Disney Princess popularity remains to be at an all-time high, with new experiences forever emerging all throughout Walt Disney World Resort. Also take note that all the aforementioned highlighted encounters are subject to change as new experiences develop. Disney has the ongoing quest to enhance opportunities and enjoyment for all visiting guests, and this includes striving to bring forth the most fulfilling character-themed encounters magic can offer.