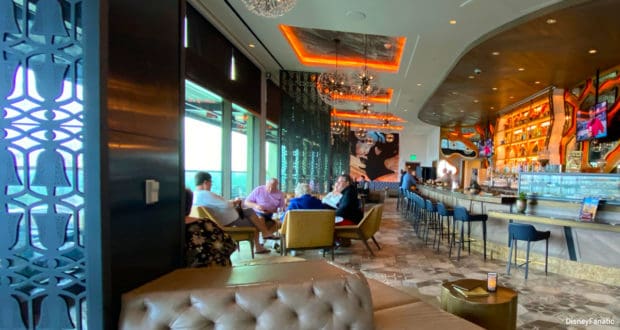 Back in July of 2019, Disney’s Coronado Springs Resort publically premiered its long-awaited and exciting addition—Gran Destino Tower. Serving as the brand new lobby for the entire resort, the innovations comprising of this highly esteemed annex include 545 guest rooms, various club services, a fitness center, and three new dining/drinking establishments. Of the latter, one that particularly stands out is Dahlia Lounge. Housed at a zenith location alongside another of the Tower’s famed establishments, Dahlia Lounge is a unique Destino destination all its own in a number of ways. Here are just some of the reasons why we’re simply crazy about it!

6. A nod to a Disney classic

Like many of the places you’ll find within the Coronado’s Gran Destino Tower, the name for Dahlia Lounge draws inspiration directly from the classic cartoon short Destino—a collaboration between Walt Disney himself and renowned Spanish artist Salvador Dali. The film weaves a story centered around love and time in which the character Chronos, an immortal yet personified figure representing time, and Dahlia, a mortal human, fall in love with one another, overstepping their own world limitations through a sequence of clips set to music. Befitting its time-transcending theme, the film took more than five decades to complete, having been started back in 1945 and not being fully completed in its entirely until 2003 under the guidance of Walt Disney’s nephew Roy E. Disney. The film’s music was written by Mexican composer Armando Donminguez and features the singing talents of Dora Luz, also from Mexico.

The aforesaid modeling of theme that’s so successful in paying tribute to this lesser-known Disney classic isn’t the only dose of nostalgia to be sampled at Dahli Lounge. While we will get more into the establishment’s décor a little later, it’s worth noting a very vital nod to nostalgia right on the walls in the form of photographs featuring none other than Walt Disney and Salvador Dali together. This collaborative montage of images of the two men pair well with the theme of time and succeeds in customizing the overall sense of transcending history throughout the decades. Furthermore, it gives one an even greater sense of appreciation and emotion than just representative design patterns alone.

Stepping into Dahlia Lounge is second to stepping straight into a work of art. That’s because the overall atmosphere and theme emanating here is directly derived from Spanish surrealism and modernism, which isn’t too surprising considering Salvador Dali’s direct involvement in the Destino cartoon. A diverse compilation of wood, marble, glass, metal, tile, and other artistic medium work well at conveying the lounge’s overall Dali motif. There are various versatile areas of focus to note, like the intricate workings as found in the dandelion chandeliers, swirling ceiling designs, studded gold mirror incorporation into the walls, busy patterns at work on the flooring, and so many others.

3. A variety of seating arrangements

Seating at Dahlia Lounge is varied and comes in a broad range of designations that go far beyond the typical table and chair format. Yes, you will in fact find tables and chairs in the traditional sense, but the lounge also provides stool seating at the bar, tall tables with stools, booths, chairs with armrests, accompanying smaller tables, and plenty of more casual lounging options as well. In addition to comfortable seating within the artistic indoor setting, patio seating is also a wonderful option.

To continue with our previous prelude to outdoor seating we can’t overlook what is quite literally Dahlia Lounge’s most elevating highlight—it’s rooftop location. Sharing zenith bragging rights with its upscale next-door neighbor Toledo—Tapas, Steak & Seafood, another establishment to open along with the premier of Gran Destino, Dahlia Lounge stands supreme at the Tower’s uppermost level on the 16th floor. This makes it an optimal viewing spot for those looking to take in a lush and expansive overview of the resort grounds. Upon closer inspection you’ll even see nearby Epcot and Hollywood Studios! Whether you stop out on the patio to briefly take in the sweeping sights or opt to sit awhile to enjoy a Dahlia Lounge menu offering, the patio provides perfectly. Outdoor seating includes loveseat-like benches, chairs, and smaller tables for a casual and comfortable lounging experience. Whether you are seated or strolling about, the optimal views are all around, with a balcony enclosure comprised of glass as not to obscure the surrounding scenery.

Dahlia’s Lounge is just what it claims to be—a lounge. So one can’t come in expecting a fully abundant menu of savory full-meal entrées with all the works. But you can still find a delightful assortment of items to pair with drinks or enjoy alone. On the Food Menu, items are classified into “Tapas” and “Plated” sections. Features in the first category include: Chilled Marinated Mussels ‘Escabeche’, Olive Oil-Poached Tuna with Lemon, Traditional ‘Tortilla Espanola’ Spanish Potato Omelet, and Valdeon Blue Cheese. Plated options include: Calamares a la Romana, Mussels, Head-On Prawns, Roasted Beets, Espelette-Dusted Marcona Almonds, and Savory Churros—a famed favorite for many. While food offerings are admittedly limited, Dahlia does deliver on is a bountiful selection of beverages. From cocktails crafted by the uppermost experts in the field to regional wine and imports mostly from Spain but also consisting of California classics as well, the options are far reaching in what Dahlia has to offer. Other extensive enticements include, Spanish and American beers, hard ciders, whiskey, rum, house specialty cocktails (and non-alcoholic mocktails), hot and cold brews, and so many others. Stop on by one evening and you may rest assured that you won’t be parched for very long at Dahlia’s Lounge.

There’s no doubt to the delights Dahlia Lounge delivers to the overall experiences at Gran Destino Tower. Until this past weekend, recent closures have put a halt to all Walt Disney World operations over the last several months. While Disney’s Coronado Springs Resort remains closed presently, regular hours of operation for Dahlia Lounge, when open, are from 4 p.m. to midnight daily. As Disney World looks ahead to continued reopening plans, it isn’t any wonder why so many look forward to that magical day when Dahlia Lounge once again reopens to the public.