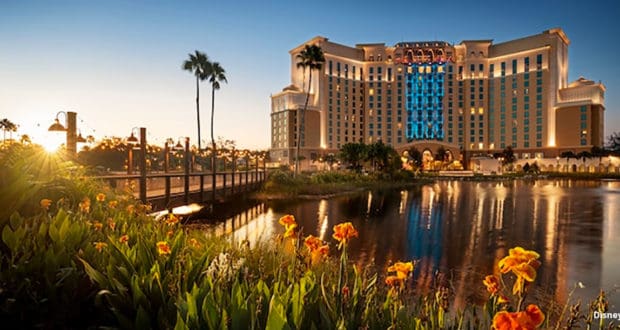 Many Walt Disney World Resorts offer onsite extras that esteem them as individual destinations all their own, sometimes even drawing in visitors staying at an entirely different resort altogether. Disney’s Coronado Springs is one such example. With the recent addition of the hotel’s Gran Destino Tower, this Moderate Resort has been growing steadily in popularity as a an ideal location to book a stay at or just come to enjoy an outing to. From optimal aerial views to surrounding artistry in architecture, eating and drinking establishments worthy of praise to stellar services, we can list innumerable reasons for why you should spend an evening at Disney’s Gran Destino Tower. Here are 10 very good ones.

10. A free art exhibition of sorts

Do you have an appreciation for awe-inspiring art and architecture? Well, an outing to Gran Destino Tower (and by extension Disney’s Coronado Springs Resort in general) may just serve as a free art exhibit of sorts. You don’t have to go all the way to Spain to see the dabbling of Dali or other modernist styles. Those and the overall essence of Spanish surrealism are displayed all around the Tower in a truly sincere inspiration that does the authentic Spain-based workings proud. While most of Disney’s Coronado Springs Resort focuses on architectural design elements inspired by the American Southwest and Mexican Colonialism in particular, Gran Destino takes to a more Nuevo modern approach focusing on the country of Spain. And while not directly stated, the implications are a feel and sense for more urban corridors. In fact, with its impressive 16 stories, many have commented that the structure seems more in line to one you’d find in a place like Las Vegas rather than Walt Disney World Resort. So if you have an appreciation for fine art and architecture, you simply must add stopping by here to your agenda.

Gran Destino Tower now houses the official lobby location for all of Disney’s Coronado Springs Resort. So in most cases, you may plan on this being the very first stop you make when visiting the site. And what a stop it is! Like most of its elevating qualities, the lobby at Gran Destino Tower is truly a marvel to behold. What’s perhaps most surprising to many guests is the fact that the lobby actually spans two stories! And with double levels comes double space, which is perhaps one of the best things of all. You never feel cramped, or confined here with all the spaciousness. There are plenty of areas to sit, and even spots that serve as excellent extra working stations/recreational stations of sorts. Furthermore, the lobby is even home to one of the Coronado’s four new onsite dining locations—The Barcelona Lounge. We will get into that and more dining designations at Gran Destino Tower a little later. Lastly, the lobby is the place to find a continuous loop playing the famed classic Destino cartoon collaboration between Walt Disney and Salvador Dali—the building’s primary inspiration.

As you will find visiting Gran Destino Tower for an evening out to be an excellent undertaking, staying a night or two as a guest is an even more elevating and exciting experience. With the establishment of the Gran Destino Tower comes an additional 545 rooms to Disney’s Coronado Springs Resort. Of those rooms, 50 are suites that even offer club level concierge services. But even if you opt for a standard room, your stay will be anything but. And at a grand total of 375 square feet, standard room sizes here are considerably larger when compared to other standard rooms at other Moderate Resorts. In many ways, these new rooms first revolutionized new standards in room accommodations at Disney in introducing many new novelties in luxury that are intended to become increasingly more common at other Disney Resorts eventually. Such novelties to note include convenient under-the-bed storage for luggage, faux-laminate hardwood flooring, and even interactive in-room smart TVs. More than just a television, these high-tech gadgets serve as your ultimate all-in-one smart device. They have the ability to access and manage your My Disney Experience account, allow you to view PhotoPass photos, check wait times, modify existing reservations and FastPass+ selections, and offer everything else you’d expect of a smart device in addition to serving its conventional purpose as a television. But even on that note, your television access is optimized in the fact that you can even stream Disney movies on demand. In addition to all these stellar attributes, rooms at Gran Destino come with all the other perks and benefits you’d expect from any resort.

As mentioned previously, concierge services are offered within select Gran Destino Tower rooms. This makes Disney’s Coronado Springs the very first Moderate Resort to go club level. The resident club level designation, known as Chronos Club after the immortal character of Chronos in the Destino cartoon short, sits astute at level 15 of the Gran Destino Tower extension. While toting the title for being the cheapest of any Walt Disney World Resort club level concierge, the services and amenities here are anything but cheap, as far as quality goes. All the same, do take note that the many stellar attributes that come with Chronos Club are to be enjoyed by resort guests who have opted for club level lodging and not evening visitors.

With the addition of Gran Destino Tower also comes the addition of a new onsite fitness center as well. While Disney’s Coronado Springs Resort has been hailed for its resident La Vida Health Club for its combined gym and spa services many years now, the new fitness center at Gran Destino Tower is truly one to marvel at. With 24-hour access available to resort guests, this innovative state-of-the-art go-to boasts a wide range of workout equipment, from machines to weights, and everything in between. The fitness center even has presoaked and chilled towels available to guests along with complimentary fruit and water offerings.

5. Sweeping sights from above

At it’s highest point, which includes dining locations in addition to accommodations, Gran Destino Tower stands at a staggering 16 stories above the ground. Overlooking such an expansive premises gives excellent vantage point to anyone visiting the uppermost levels. And there are two very good reasons for taking in these elevations, which we will get into more detail with below. They include well loved dining and drinking designations known throughout Walt Disney World Resort and, by extension, the greater Orlando area. These sweeping views alone are reason enough to enjoy the Tower, but when combined with savory entrée selections or refined imported wines and other beverages, the sights abound are even more spectacular. What’s more, when you look closer you can even see the nearby parks of Epcot and Hollywood Studios out in the distance.

Following extensive renovations, Disney’s Coronado Springs now sports four new dining establishments in addition to the previous impeccable options that were already mainstay traditions. Of the four newbies, three are directly located within the walls of Gran Destino Tower. This includes one of the resort’s most popular picks. Toledo—Tapas, Steak & Seafood is one of the aforementioned elite, elevating dining establishments we referred to earlier in regards to the stunning high-in-the-sky viewing options to take in. But it isn’t the zenith location of this restaurant alone that endears it to faithful fans. The food, drink, décor, and style all work in conjunction with one another to make the overall dining experience here one to be savored. First let’s talk about the theme, which pairs elements of Spanish surrealism with a unique fusion of 1930s avant-garde style. The all-encompassing rooftop olive trees and stellar vaulted ceilings further set the mood for the fanciful charm and overall appeal so prevalent here. Another element that works well in creating such a refined and distinguishable atmosphere is the on-stage tapas kitchen, which is in perfect view to the diners’ delight. Fine fixings of Spanish steak and other landlocked palatable pleasures in addition to supreme seafood designations all blend together perfectly to bring a mutual enjoyment to guests of all tastes and interests. And let’s not forget the delightfully profuse wine lists and other drink recommendations to boot, along with refined and sophisticated dessert presentations to make for a sweet sendoff.

Sharing elevated bragging rights with its next-door neighbor Toledo—Tapas, Steak & Seafood, Dahlia Lounge stands astute as the ultimate epitome of what a resort lounge should be. Named again in honor of a Destino film short character, this majestic haven is one laden with impeccable modernist style, glamor, and design. From reminiscent touches in décor (including photos of Walt Disney and Salvador Dali) to flexible seating options, Dahlia Lounge blooms into life with an enticing presentation like no other. While dining selections are limited to small plated items and tapas, the drink menu is much more elaborate with profuse offerings that even include Spanish imported wines as well as California’s finest. A wide range of hard cider, beer, rum, whiskey and other offerings also make up the list, in addition to specially concocted cocktails, virgin mocktails, and even liquored coffees and other hot brews.

Another lounge joining the ranks of new establishments within Gran Destino Tower is Barcelona Lounge. Situated off the new two-story lobby, this unique little hub operates as a traditional Catalonian style café by day, serving up all your caffeinated favorites as well a host of delectable sweet treat pairings. But as the day shifts into evening, café offerings shift into more amplified makings more in line with what you’d expect from the usual gin tonic bar. Guests are invited to enjoy seating indoor or out, as a patio bar offers up supreme lake views of Lago Dorado.

Disney’s Coronado Springs Resort has long been known for offering a well-equipped 220,000 square-foot convention center that features two ballrooms, 45 break rooms, and an exhibition hall among other things. But Gran Destino Tower takes event hosting to brand new heights by offering even more additional rooms and working areas. These include a 24-seat boardroom, the 2,859 square-foot Lantana Room, and the 12,000 square-foot Destino Plaza for more open-air undertakings. The aforementioned rooftop dining locations also offer private dining rooms that are perfect for hosting events. Of course you’ll want to reserve such spaces in advance if you plan on hosting an event here one evening, but in the off chance that you want to find a quiet spot to unwind and relax in a bit, just refer to the interactive real-time maps you’ll find all around the Tower, denoting which rooms are in use or occupied at any given time.

At this time, Gran Destino Tower—and by extension, all of Disney’s Coronado Springs—Resort remains closed to the public. As Walt Disney World continues with phased reopening plans for park attractions and on-premises hotels there are many eagerly looking forward to the return of myriad enjoyments to be experienced here. So rest assured that when you are again able to enjoy a night out at Gran Destino Tower it will have been worth the wait!