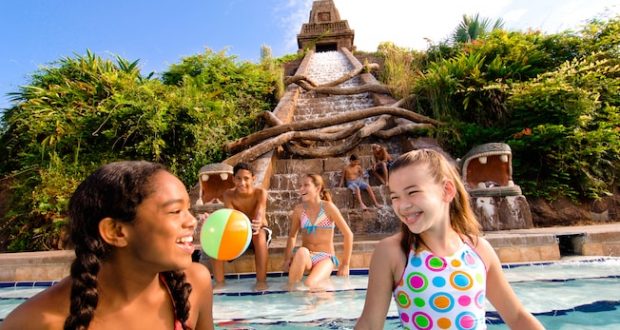 One of the greatest things that set Walt Disney World Resort properties apart from others is that each Disney accommodation is its own one-of-a-kind entity, boasting its own distinct theme. Because different styles, budgets, and room options appeal to different people, Disney has presented a wide range of accommodations to make every vacationer’s stay a dream come true, whatever they seek. For those who are looking for a moderately priced stay with an old-world Spanish-Colonial vibe, for example, we have the perfect recommendation—Disney’s Coronado Springs Resort. With seemingly endless onsite excitement and numerous exclusives, there are hundreds of reasons why we love this place. Here are eight very good ones why you will love it too.

As mentioned before, Disney’s Coronado Springs Resort follows a quaint old Spanish-Colonial theme reminiscent of the early days of southwest colonization. Through vivid colors, architectural works, and distinctive décor, guests are instantly transported back into the heart and spirit of old Mexico upon arrival. There are three distinct accommodation areas that all work together to form this motif—Casitas, Cabanas, and Ranchos. While the Casitas focus more on the Spanish architectural influences of Mexico City and southwest urbanization in general, the Cabanas give off a beachy, coastal vibe. The Ranchos bring forth a feel for westward cattle ranching in the great outdoors. All are unique in their own right yet still encompass the sameness and overall theme the resort celebrates.

While officially considered an Animal Kingdom Resort Area accommodation, when you stay at Coronado Springs, traveling to any and all of the four theme parks and two water parks takes only a matter of minutes via Disney’s complimentary shuttle service. Additionally, because the resort is a pretty spacious one, there’s even an internal shuttle service for navigating around the premises from within. A total of four internal bus stops can be found at each of the three themed lodging areas (Casitas, Cabanas, and Ranchos) as well as at El Centro. And as is always the case for Disney Resort accommodations, Magical Express shuttle services make for easy and convenient commuting to and from the Orlando International Airport at the start and the conclusion of your stay.

Disney’s Coronado Springs has recently undergone extensive resort-wide renovations to improve guest experiences even further. Such improvements include refurbishments to all existing guest rooms, in addition to new accommodations available in the recently opened Gran Destino Tower (which we will get to in more detail next). Now Coronado guest rooms come with hard flooring rather than carpet, updated furnishings and fixtures (including new bed frames with spacious room for underneath luggage storage), remodeled bathrooms and shower components, improved closet space, new televisions, lighting, and much more.

The highly anticipated 15-story Gran Destino Tower addition at the Coronado has at long last opened to the public, and it’s even better than anyone could have possibly imagined. With stunning new décor features that combine old-world Spanish charm and Catalan Modernism alike, the overall appeal of this premier sector truly makes for a one-of-a-kind blending of thematic elements that work well together. The tower’s primary inspiration comes from an earlier Walt Disney and Salvador Dali collaborated animated project that was initially begun in the 1940s but was not completed until 2003 by Walt Disney’s nephew Roy E. Disney. In fact, guests will even find the now finished Destinofilm being played on a TV in the new two-story lobby as well! Additionally, many of the tower’s thematic additions play homage to the film’s two main characters—Chronos and Dahlia. As mentioned, the new tower boasts a brand new lobby, creating an all-new arrival experience for guests. What’s more, the Gran Destino Tower alone adds an additional 545 guest rooms into the mix, bringing the resort total up to 2,385 accommodations. And let’s not even forget the newly established food and drink options that have opened onsite here as well as plenty of meeting and event spaces to boot!

5. First of its kind club level offerings at a Moderate Resort

While in the category of Moderate Resorts, Disney’s Coronado Springs has succeeded in being the first of its kind to bring club level offerings to its guests, despite not being a Deluxe Resort. Out of the 545 additional guest rooms established at the new Gran Destino Tower, 50 include spacious suites and full-fledged club level accommodations. This means those opting for a stay complete with all those pampering Disney Vacation Club amenities are no longer limited to Deluxe Resorts alone. Coronado Springs delivers impeccably in what they have to offer, from the exclusive new Chronos Club Lounge and its light refreshments throughout the day, to Disney Signature Services, plus everything else that comes with being part of the elite Disney Vacation Club—even a separate fitness center!

Even before all the massive resort-wide renovations, Disney’s Coronado Springs Resort boasted a remarkable array of onsite dining options. From the long-time favorite Maya Grill, famous for featuring “ancient-modern styling and Nuevo Latino cuisines,” to El Mercado—the resort’s main eatery, consisting of multiple serving stations and varied options throughout the day, it would be impossible to ever go away hungry here! And now four new establishments have joined the ranks—three of which can be found within the new Gran Destino Tower. First there’s the simple but elegant Barcelona Lounge within the lower lobby area, which operates as a quick service Catalonian style café by day and a gin tonic bar by night. Another new lounge, found at the tower’s zenith on the 16th-floor rooftop is Dahlia Lounge. Boasting Spanish surrealism at its finest, this new social hub brings forth the best in both libations and light eats. Also sitting at the high and mighty rooftop location right next to Dahlia Lounge, is Toledo—Tapas, Steak & Seafood. A full-fledged table service restaurant everyone in the family can appreciate, flavors on the menu draw on traditional Spanish-inspired dishes and small plates alike. Additionally, doubling as a feast for the eyes as well as the stomach, diners here are treated to stellar aerial views overlooking the resort as they dine in the presence of actual olive trees no less! Then there is the very epitome of epicurean delights—Three Bridges Bar & Grill. Situated out on the hotel’s Lago Dorado (Golden Lake), this open-air waterfront dinner retreat on the waves features a stunning presentation of delightful entrées, small plates, cocktails, and even signature sangria pitchers. And the views while dining are nourishing to the soul also.

While not every Walt Disney World Resort property features an onsite spa and fitness combo, the Coronado is among those that do.  La Vida Health Club boasts a number of onsite services and amenities, from the latest in state-of-the-art fitness equipment to rejuvenating spa practices, including facials, massage, aromatherapy, warm stone treatments, and so much more. Full service salon packages are also available for men, women, and children alike. From haircuts to dye jobs, nails to refreshing shampoos, it’s all here! They even offer Character Couture Packages and a host of other options for Timeless Transformations and Magical Makeovers.

It goes without saying that all Walt Disney World properties boast their own wonderful resort-specific amenities and features. And this is especially true of the Coronado with its popular poolside attractions. First, there are three relaxing leisure pools at each of the three distinct accommodation settlements, providing the perfect opportunity for guests to unwind and relax. Then there is the stellar Lost City of Cibola Pool, located in the equally stellar Dig Site Area, also known as a recreational mega hub. The pool itself is an unearthed treasure, featuring a nearly 50-foot replica of a Mayan pyramid to awe any onlookers and a fast-flowing jaguar-themed waterslide to maximize your riveting riparian recreations. The Dig Site is also where you will find what is currently the largest outdoor hot tub in all of Disney World. Other exciting endeavors to pursue on premises at the Coronado include playgrounds, arcades, campfire activities, movies under the stars, bike rentals, jogging trails, and so much more. And let’s not forget the stunning marvel that’s the Lago Dorado, the resort’s scenic 15-acre lake—a truly spectacular sight to behold. We can’t even begin to tell you all the reasons why we love Disney’s Coronado Springs Resort, but this is a very good start. Reasons to love this place are seemingly innumerable, even more so now that the multiyear renovations have come to an end, resulting in what’s a far more enhanced guest experience than ever before. Discover for yourself all the crowning glories of Disney’s Coronado Springs Resort!