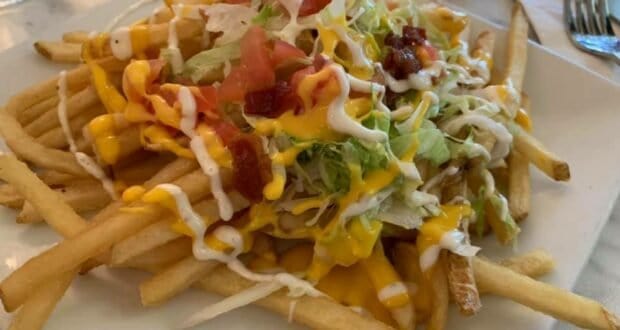 10 Tasty Tater Options with a Twist at Disney World

How do you like your potatoes? Do you like them mashed, served up as fries? Do you take to tatter tots or are you the casserole tattering type? Perhaps even a soothing spud-laden soup is more your thing. Whatever your precise potato hankering you should know that

Walt Disney World Resort offers up a bustling food scene boasting a broad range of versatile options to go around. And this of course includes plenty of potato-based possibilities. From classic favorites done up to the nines to novel specialties that are exclusive to a particular establishment, here are 10 tasty tatter options that you simply must try while making your rounds at Walt Disney World Resort.

This quick-service spot within Fantasyland, over at the Magic Kingdom, has been a top tatter tot go-to for many years. And because they open bright and early, they even offer a unique breakfast-based spin in the form of their exclusive Sausage and Gravy Tots feature. Other tempting tot renditions you can have throughout the day include their popular Creamy Bacon Macaroni & Cheese Tots specialty or simply Tots and Cheese Sauce offering.

Friar’s Nook isn’t the only tot hot spot in Disney World, though. You may know of the Beach Club Resort’s resident Beaches & Cream Soda Shop as being home to the infamous Kitchen Sink and other sundae specialties. But it also happens to be the place where you can find decked-out Chili Cheese Tots. Loaded up with the obvious chili and cheese referenced by its name, these tantalizing tots also pack on the sour cream and green onion. Those following a plant-based diet take note, Beaches & Cream also offers a vegan variation of the aforementioned, with vegetarian chili, dairy-free cheese, and sour cream leading the show. And for those looking for something even more filling, there’s their featured Cheese and Bacon Tots, which come dressed up in cheese sauce, bacon, red onions, and garlic-peppercorn ranch. Enjoy your tots here any which way you choose, even if that means plain, which they also offer.

These flavorfully packed morsels have been a Hollywood Studios hit ever since Woody’s Lunch Box first opened at the Park’s Toy Story Land. If you like potato barrels then you’re going to love this robust concoction that dresses the familiar tots up with all the works, including hearty beef and bean chili, cheese, tomatoes, and corn chips. Topping it all off is a crown of sour cream and a sprinkling of green onion. Those who adhere to a plant-based diet can rejoice in their own Totcho rendition as well, which incorporates vegan chili and cheese.

Because French fries are among one of the most familiar potato-based pleasures in society, we couldn’t overlook them in our tally of tasty tater options. And thanks to the many venues throughout Walt Disney World Resort that have spun their own spin on the spuds, there are many specialty fries to try as an alternative to the usual. Here are a couple of examples:

This Canadian classic, which traditionally comes served as classic French fries and curds, is another popular potato possibility offered at quite a couple locations throughout Walt Disney World Resort. If you’re making your rounds through EPCOT, stop at the Canada Pavilion. If you’re in a hurry, you can find Traditional Poutine on the menu at Refreshment Port, which also pours on the beef gravy to accompany the aforementioned fries and curds. But if you have time for a signature, upscale meal there’s Cellier Steakhouse, which offers up some very unique takes on poutine, including their Beef Stir-fry and Beef Bourguignon, in addition to their Signature delight. For even more poutine profusions, head on over to Disney Springs to the location rightfully named The Daily Poutine. Here they’ve taken poutine on an international upgrade, with such novelties as Italian, New Delhi, Korean, Irish, and other dressed up customizations.

Because potatoes come in many formats, we had to pay tribute to one of the most popular ways to enjoy them—mashed. As a contested comfort food, it goes without saying that there are numerous locations throughout Walt Disney World Resort serving them up as a side. So rather than trying to nail them all down, we’re paying tribute to one house offering in particular—Narcoossee’s Signature Mashed Potatoes. An enhancement to the usual additions, these stunning spuds are whipped up in a blended mix of bacon, cheddar, chives, and crème fraiche.

Here’s another classic from across the pond. And rightly so, it too features mashed potatoes. You’ll find it being offered once more at EPCOT’s Rose & Crown, topping off traditional English sausage with Colcannon potatoes, mushroom, onion, and red wine demi-glace. Raglan Road has their specialty Bangin’ Bangers & Mighty Mash, which comes presented as Cheshire heritage pork, Irish potatoes, and onion gravy.

If you’re looking for a unique way to get your potato fixing early on in the day, consider breakfast at Chef Mickey’s over at Disney’s Contemporary Resort. More specifically, try their signature “Loaded” Potato-Cheese Casserole. Pretty self-explanatory as to what the two main ingredients are, this culinary marvel also gets topped off with smoked bacon crumbles and green onion.

Another pleasing potato rendition you can try at Chef Mickey’s at dinnertime are is this sizzling spud specialty. Roasted up with an emboldened garlicky flavor, their signature Mickey’s Parmesan Frico is what really elevates the overall presentation.

Sometimes you just want to settle down with some nice and hearty soup. And if you’re looking for potato soup in particular, we suggest you head on over to Boatwright’s Hall, over at Disney’s Port Orleans Resort—Riverside. Their signature French Onion Soup Au Gratin truly goes above and beyond, comprising of Gruyère cheese, onions, and toasted croutons, blended together in a beef broth.

Related: Which of Walt Disney World’s Port Orleans Resorts is Right for You?

Because not all Disney venues have reopened, there are some palatable potato picks we’re still missing greatly, and eagerly hoping to see make a comeback soon. Two such examples are the signature Potato Casserole at Akershus Royal Banquet Hall, offered during breakfast time, and Monsieur Paul’s dinner specialty Red Snapper in Potato “Scales.” There’s also a longtime missed Disney exclusive that used to be featured on the menu of the Empress Lilly long ago. We’re of course talking about their legendary house Au Gratin Potatoes—a Disney classic that just can’t be beat.

As you venture through Disney World, you’re bound to find even more tasty tater variations than what we’ve touched on. So, whether you like your spuds on the side or as the main, mouthwatering feature, the potato possibilities are altogether plentiful!