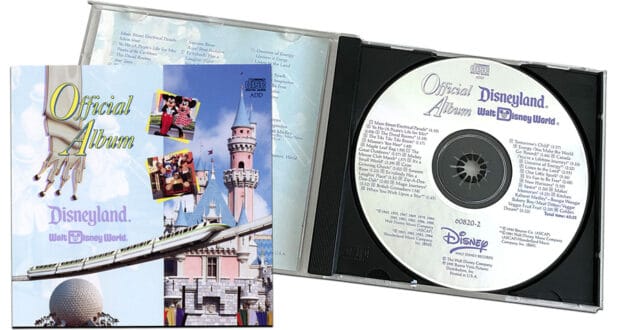 Steven Miller first mentioned the “Official Album of EPCOT Center” that he heard during his family’s first visit in the year 1983! The next collection of Disney theme park music that the Disney devotee was particularly drawn to was the 1991 “Official Album of Disneyland and Walt Disney World”. In the late 90’s, he also gleefully took advantage of the “make-your-own-CD kiosks” known as “Walt Disney World Forever” (which were at the future Disney Springs for a time).

Miller also reminisced specifically about a 1973 picture-disc entitled “A Musical Souvenir of Walt Disney World’s Magic Kingdom” (seen below), saying that his favorite score on the disc is Gavin Greenaway’s “Tapestry of Nations” parade one. As a Disney cast member, Steven Miller also knows lots of fun facts and secret tidbits about the Disney parks! According to Miller, “on windows above the Emporium on Main Street, U.S.A., in Magic Kingdom Park, you will spot two names – G. Bruns and B. Baker. These Disney Legends were instrumental in creating music still heard at Walt Disney World Resort nearly 50 years later”.

Composer-conductor George Bruns scored the music for “Sleeping Beauty” and “Robin Hood”, as well as the “Pirates of the Caribbean” and “Country Bear Jamboree” attractions within Magic Kingdom Park. Buddy Baker was a Disney composer for over 200 scores for Disney movies, TV shows, and the Disney theme parks. He also directed the music for the Future World pavilions as well as EPCOT’s World Showcase. As another fun fact, Miller also referenced a “hidden musical surprise on Center Street, the side street near Uptown Jewelers”; apparently if you “listen carefully”, you can “hear singing lessons and the sound of a piano coming from a second story window”!

Disney fans have always been charmed by Disney music, particularly in Disney rides or motion pictures, and Walt Disney World is also coming out with an official playlist for Disney World’s 50th anniversary! Were you already familiar with the history and people behind Disney’s music? Did you listen to any of these records or albums yourself?