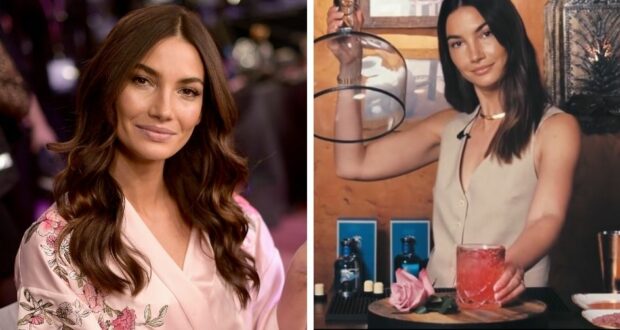 Sports Illustrated Swimsuit model, supermodel, and former Victoria’s Secret Angel Lily Aldridge created a unique margarita for La Cava Del Tequila during the EPCOT International Festival of the Arts, promising not only that she would surprise Disney Guests with an in-person meet and greet but also that the margarita would be absolutely delicious — and the famously-friendly model has delivered on both counts! The “Lily” margarita has been officially added to the La Cava Del Tequila menu, and the Nashville resident herself was just in the Mexico pavilion in EPCOT spreading the news all day about the “gorgeous cocktail”!

The margarita is a watermelon-red foamy margarita that includes Casa Dragones Blanco tequila (which is Lily’s “favorite tequila”), rose liqueur, cranberry juice, lime juice, and violet essence. The resulting margarita is a “little bit of sweetness” and a “lot of lovely tartness from the cranberry”, and you can find it at the popular spot La Cava del Tequila (an establishment known for fun food and exciting drinks in the Mexico pavilion)!

Since the margarita has become a more permanent fixture at La Cava del Tequila (which Lily called her “Disney dream” coming true), the Lily margarita now comes in a bigger glass and there’s a takeaway version available.

It’s also presented in a far more elaborate fashion with an “amazing reveal” including both a flower and a dramatic “floral smoke”. You can check out the gorgeous art and style featured in the presentation of the fun drink in the brief interview with Lily, shown above!

Throughout March, which is Women’s History Month, La Cava Del Tequila will also be donating a portion of the proceeds from the Lily margarita to Women for Women International, an organization focused on helping female survivors of conflict and war.

Lily Aldridge is also an ardent patron of No Kid Hungry and St. Jude’s Children’s Hospital, and the Bulgari ambassador’s small perfume line Lily Aldridge Parfums donates a portion of proceeds to charity as well!

Lily Aldridge is famous for her love of Walt Disney World Resort and Disneyland Resort, having shared her visits to Disney World many times on social media, and the California native often brings her daughter Dixie to Disney with her! Lily is married to Caleb Followill, the lead vocalist from the band Kings of Leon, and they also have a young son named Winston.

Lily spent some extra time in Disney World during this past week after her meet and greet with Disney Guests on March 12; check out her Disney days with her daughter shown below!