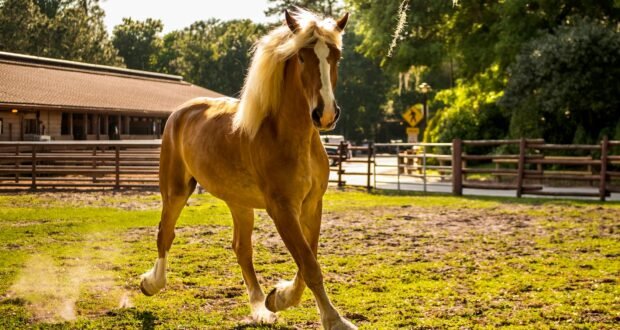 All About the Horses of Walt Disney World Resort

You may or may not already know that the Walt Disney Company has a pretty horsey history. Even predating the establishment of Disney Parks, Walt Disney Entertainment has been known to feature these majestic creatures throughout all sorts of films and other features.

In fact, any visitor to Disney’s Saratoga Springs Resort & Spa at Walt Disney World Resort today will see a heartwarming pictorial history display in the lobby, all about the history of horses that have notably appeared within Disney Entertainment.

Related: Can You Match The Horse To The Disney Movie?

The horse scene at Disney Parks today is as much alive today as it ever was. And the horses who call Walt Disney World home have it made in so many ways. From leading in parades and various forms of entertainment engagements to getting optimal treatment and care, we’re paying a tribute to these most honored animals by showcasing eight exceptional facts you’ll want to know about the horses at Walt Disney World Resort.

8. A Diverse Ensemble of Exceptional Equids

You won’t just find one sole horse of a different color at Disney World. Here you have a wide range of unique breeds making up the vast and versatile menagerie of “mane” characters. Included in the ensemble of exceptional equids are Clydesdales, Quarter Horses, Paints, Percherons, Appaloosas, Gypsy Vanners, Belgians, Shetland Ponies, and even some miniature horses and mixed breeds.

One adorable addition worth noting came in 2019, with the birth of Lilly the pony. Named after Lillian Disney, the wife of Walt Disney, she was the very first white Shetland Pony to be born on Disney World property.

7. Horsing Around on Main Street, U.S.A.

Horse business at Disney World takes on many different roles, including what is perhaps the most successful act of all—bringing smiles of joy to the faces of Guests. You’ve probably seen horses marching along in parades and featured in various performances throughout Walt Disney World. Perhaps you can think back to those large draft horses you’ve seen pulling the one and only Main Street, U.S.A. Trolley.

While it’s true that draft horses are bred for pulling heavy loads, here’s a little “secret” behind the Main Street, U.S.A. Trolley to put horse lovers at ease. The Trolley is, in all actuality, patterned with a lightweight design. Therefore, the Disney horses involved are never under any form of stress or strain.

6. Home on the Range

When not performing, these majestic creatures can be found horsing around on over at their permanent home at Tri-Circle-D Ranch. Situated on the grounds of Disney’s Fort Wilderness Resort, Tri-Circle-D Ranch is its very own attraction. What’s more, it is entirely free to visit.

Take a self-paced tour or speak to one of the caretakers to learn all about the horses here and what their primary functions are. There is also a display exhibit featuring the original Dragon Calliope musical instrument that Walt Disney purchased for the Mickey Mouse Club Circus Parade at Disneyland Park back in the 1950s.

Additionally, there are a host of activities and extras you can sign up for at Tri-Circle-D Ranch. Guests ages 9 and older, who are at least 48 inches tall, may join in a 45-minute horseback riding excursion through a wooded trail. At a cost of $55 a person, these rides are great for both intermediate riders and beginners alike.

For the kiddies who don’t yet measure up to taking a trail ride, there are also pony ride offerings. At just $8 a child, this option was designed for participants as young as 2 years of age, no taller than 48 inches in height, and weighing well below 80 pounds.

Another awesome option is going on a scenic horse-drawn carriage ride. Spanning a duration of 25 minutes, the cost for these rides is $55. Carriage rides are currently also offered over at Disney’s Port Orleans Resort—Riverside as well.

Related: 10 Things You Never Knew You Could Do At Disney

In the past, there have also been wagon rides and special holiday carriage ride opportunities. Both remain unavailable at present time. To learn more about Tri-Circle-D Ranch and its many offerings, call 407-WDW-PLAY (939-7529) or visit the website.

As we said before, Tri-Circle-D Ranch is the permanent home to Disney World horses. But you may be wondering how they get from one location to the other. For this task, Disney relies on the use of multiple custom-made horse trailers Built out of aluminum and designed with a fifth-wheel designation, each trailer consists of three different stalls, for the safe and comfortable commute of up to three draft horses or six ponies at a time.

It is important to Disney that each and every one of the horses here be as healthy as a horse. That’s why the experienced and knowledgeable caretakers overseeing the roughly 90 horses go above and beyond in providing the most optimal care, which includes daily bathing and grooming, dental care, physical exams, and wellness checks regularly, staying current on all needed vaccinations, and re-shoeing every five to six weeks. It also goes without saying that each resident is provided a well-balanced and delicious diet. Making up the kind, committed team of caretakers are ranch hands, nutritionists, blacksmiths, and veterinarians. It should also be noted that the emotional well-being of the horses here is also seen to as well.

2. The Scoop on Poop

In an exchange barter system of sorts for being provided with such optimal care and ideal living conditions, the horses on Disney property pay it back by being co-creators in the production of free, natural fertilizer. That’s right, horse droppings—the result of the well-balanced delicious diet we previously referred to are consistently collected and compiled into Disney’s compost to be transformed into nutrient-rich fertilizer by the Horticulture team and then reutilized in gardening all throughout Walt Disney World Parks and Resorts.

In addition to overseeing their own resident horses and providing them with an optimal life, the Walt Disney Company in general is actively committed to helping horses and other equids in the wild as well. Through the Disney Conservation Fund, Disney has assisted with habitat preservation and reestablishment, providing care and other resources, and has even been at the forefront of saving dwindling breeds the world over. You can learn all about their work through the Disney Conservation Fund by clicking here.

Disney is deeply devoted to the care and commitment to creatures great and small from all around the world. It was a dream, legacy, and lifelong love that was so near and dear to Walt Disney’s own heart. From the majestic horse to that famous little mouse we all know and love as Mickey, Disney has always been about animals, and animals have in turn always been a vital part of the Disney scene.