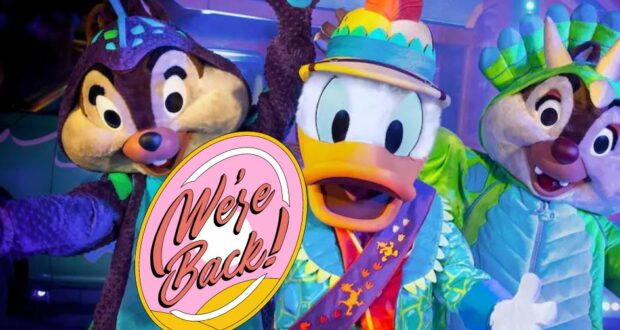 The ongoing COVID-19 pandemic has certainly put the Walt Disney Company through the wringer, since Disney Parks and Disney Resorts are designed to hold large crowds and a pandemic is directly at odds with that goal. However, we have gradually seen more and more Character Meet and Greets, shows, and dining establishments reopen — and now another fun Disney feature is back!

In the Animal Kingdom’s area known as Dinoland U.S.A, several classic and beloved Disney characters are back in person for Character Meet and Greets. These include Donald Duck, his longtime love Daisy Duck, and the mischievous chipmunks Chip and Dale. These happy Disney ducks and chipmunks will be back in Dinoland U.S.A as of September 4, so you don’t have long to wait!

If meeting Donald Duck and his friends leaves you longing for more, you can also head to the Adventurers Outpost to meet Mickey Mouse and Minnie Mouse (who will be dressed a lot like Indiana Jones). There is also a fun Adventure Flotilla experience coming onto Discovery River, which will feature Disney characters like the DuckTales characters known as Launchpad McQuack and Scrooge McDuck– not to mention Russell and the lovable Dug from Disney and Pixar’s UP! This fun character-filled float will also be arriving on September 4! Disney characters are also back for Character Meet and Greets and character dining experiences at the popular Animal Kingdom restaurant called Tusker House (which is bringing back its signature buffet offerings despite the ongoing COVID-19 pandemic and the spread of monkeypox). Are you excited to catch up with these old friends in Dinoland U.S.A? Have you been back to the Animal Kingdom theme park to enjoy locations like Camp Minnie Mickey or the Conservation Station, dine in the Harambe Market, and escape the yeti on Expedition Everest: Legend of the Forbidden Mountain?