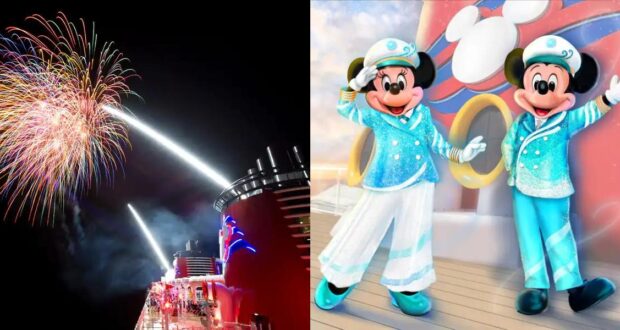 Disney Cruise Line is turning 25 years old, and the magical celebration will be felt across the entire fleet, from the original two to the latest and grandest. Created in honor of Disney Cruise Line’s 25th anniversary, the limited-time evening extravaganza will uphold the cherished Disney tradition of fireworks and honor Disney’s continuing legacy of adventure. The dazzling spectacle will be set to the tunes of iconic and beloved Disney music, and anchoring the show will be a brand-new signature song created especially for the “Silver Anniversary at Sea.”

The fireworks will be seen on most cruises in the Bahamas, Caribbean, and Mediterranean this Summer. There will also be a special Captain’s reception to toast Disney Cruise Line on its Silver Anniversary.

On one evening each cruise, guests will be invited to join their ship’s captain and cruise director in the atrium for an anniversary toast. The festive affair will feature appearances from Captain Mickey Mouse and Captain Minnie Mouse — dressed for the occasion in their shimmering new looks, of course! — and a delightful rendition of the “Silver Anniversary at Sea” theme song. Castaway Cay Club members who take a Disney Cruise during this celebration will also be treated to a limited-edition framed art print created by Disney artist Joe Kaminski. Kaminski’s work can be found on Disney Cruise Line ships, as well as Disney Resort Hotels and The Art of Disney Galleries. Disney Cruise Line began in 1998 with the Disney Magic and the Disney Wonder. At the time, they were the largest cruise ships in the world. Beginning with sailings out of Port Canaveral and Miami, the fleet has expanded to include three larger ships and voyages that take Guests to the Mediterranean, Northern Europe, Alaska, Hawaii, and soon Australia and New Zealand. There are also two new ships that are being prepped to enter service. The first is the Disney Wish’s sister ship called the Disney Treasure, and the second is a still-unnamed ship originally called the Global Dream that was bought by Disney mid-construction.