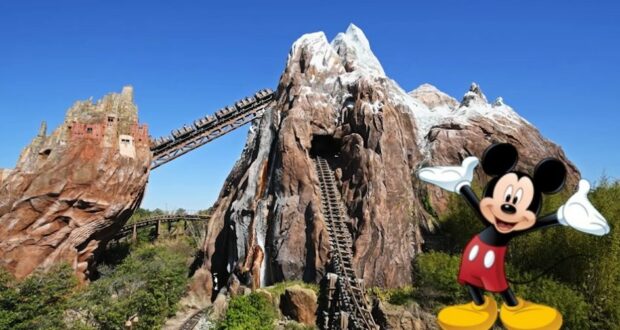 The popular roller coaster attraction, Expedition Everest looms over the Asia portion of Disney’s Animal Kingdom. Typically, as Guests approach Asia screams can be heard from thrill riders braving the coaster and its terrifying Yeti.

Now, as shown in the Disney website screenshot below for Disney Genie+ Lightning Lane Entrance, Disney has added “Expedition Everest – Legend of the Forbidden Mountain (beginning April 16, 2022)**”. After August 7, the attraction could move back to being an a la carte individual Lightning Lane attraction.

Even though we aren’t thrilled we’ll need to pay the $15 per person, per day if we want to take advantage of skipping the line for Expedition Everest, we’re just happy to have a Saturday, April 16, 2022 reopening date.

Shortly after Expedition Everest opened in 2006, the Disney Park legendary Yeti animatronic broke. The Yeti’s framing split and has been deemed a “threatening catastrophic malfunction.” Disney went to plan B which was adding a strobe-light effect around the Yeti animatronic to give it the appearance of moving. The “fix” birthed the nickname “Disco Yeti” for the massive animatronic.

While we wish we could say Disney was fixing the broken Yeti during this long refurbishment, rumors are that the refurbishment was for the ride control system only.

After over 3 months of closure, enjoy riding Expedition Everest when it reopens this weekend!

2022-04-14
Jamie Sylvester
Previous: Changes Announced for Popular Restaurant at Disney’s Grand Floridian Resort
Next: Video: Guests Riding Space Mountain Pushed to the End of the Ride With the Lights On!