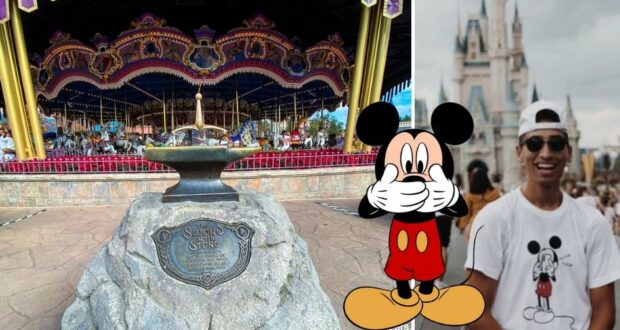 Ouch! Disney Adult Roasted for Failing to Pull Sword from the Stone

A well-known Disney Guest and TikToker was thoroughly roasted for failing, yet again, to pull the Sword from the Stone.

For many, Magic Kingdom’s Fantasyland in Walt Disney World Resort is the perfect place to live out just that: their fantasies. Many, but apparently, not all. One such Guest has become incredibly well known both on social media and even by the Disney Characters themselves for his persistent attempt to fulfill his fantasy: becoming the King of Fantasyland. Disney Fan and Tiktokker @jojocrichton — JoJo — has been visiting the Magic Kingdom nearly every day in his attempt to become the King of Fantasyland. He’s even become an internet sensation as now, Guests and even Characters at the Park recognize him. He’s posted many attempts on social media where he tries (and often fails) to pull the Sword from the Stone.

Check out one of his attempts:

This is not the first time we at Disney Fanatic have covered JoJo’s attempts to win the Sword in the Stone challenge. Earlier this year, the Disney Fan and TikTokker documented another Guest violating Disney’s rules in order to try and pull the Sword while commenting on the Guest’s strategy to try and beat the challenge.

Recently, JoJo was roasted by Disney Characters for being unable to win the challenge even after all his attempts, in particular, by Anastasia and Drizella, the stepsisters from Disney’s Cinderella (1950).

JoJo shared another TikTok video in which he tries to impress the stepsisters dressed in Merlin’s robes while he’s walking around the Park. One of the sisters asked him if he had magic, to which JoJo replied, “I do, and I know you’re looking for a suitor.”

Drizella did not hold back,

“Well, we’re kind of looking for someone who can actually pull the sword from the stone.”

Related: TikTokers Accuse Disney of Sabotaging the ‘Sword in the Stone’ Challenge

JoJo has not been successful at living his fantasy yet, but maybe one day, he’ll win both the title of King and perhaps even one of the stepsisters’ hearts.