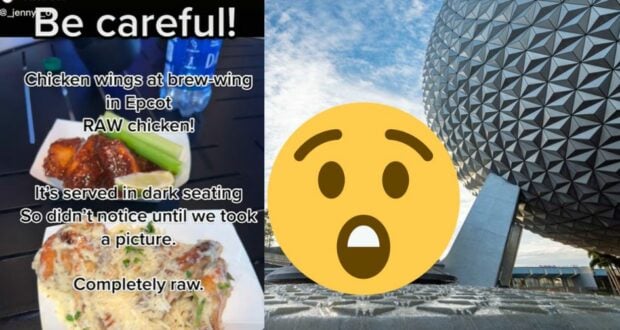 “Be Careful!” Guest Warns of Raw Chicken Served at EPCOT

EPCOT International Food & Wine Festival is underway! With Guests flocking to enjoy the festival entertainment, merchandise, food, and beverages – one Disney Park Guest is warning visitors to “be careful” of raw chicken being served.

The EPCOT Festival is a fan favorite at Walt Disney World Resort and one of the most popular festivals held throughout the year. With seemingly endless food booths and a large variety of cuisine selections, dining and drinking your way around the World Showcase is highly-recommended.

But, for one Guest – the dining part didn’t go as planned! They purchased a chicken plate at one of the Global Marketplace quick service booths called Brew-Wing. Unfortunately, they realized they were served raw chicken.

@_jenny__o took to social media to share photos of the before and after images of her food, commenting with, “Raw chicken at Brew-Wing booth.” She noted the meal was served in the dark, so they didn’t know until they took a photo that the food was “completely raw.” Here’s the video below:

@_jenny__o further notes in the comments that the manager and Cast Members “alllll freaked out it was totally chewy and raw.” Apparently, the Cast Members apologized and gave the Guest a gift card.

In the photo, it looks like plenty of the food was eaten, but as the Guest mentioned before, it was dark seating. She noted in the comments that “they tasted great until I got to the inside of the wing and it was chewy.”

One outside comment points out that the wings are smoked, which could be the reason for the raw appearance stating, “Bro, they’re smoked chicken wings. The pink is smoke ring. We go through this every year the Brew-Wing experience is open. The smoking causes it.”

Interestingly enough, another comment on the post notes, “Someone literally posted in the annual pass holder group they got sick from these wings!”

RELATED: New ‘Beauty and the Beast’ Experience Debuts at EPCOT

Disney describes Brew-Wing at the Odyssey as “Try a variety of flavorful chicken wings—along with assorted beers and ciders.” The food menu includes:

The EPCOT International Food & Wine Festival is available from July 14 to November 19, 2022. If you decide to skip out on Brew-Wing, there are still plenty of exceptional Global Marketplaces to explore throughout the Disney Park for delicious Walt Disney World dining.