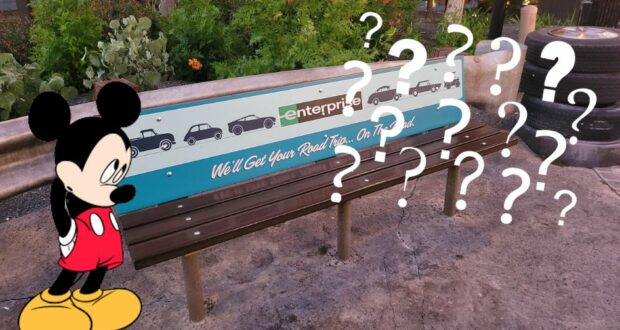 Tacky or Ok? Disney Is Now Allowing Bench Advertising in Its Parks

When Disney fans visit the Parks, many tend to look at it as a getaway from the real world. The stresses of the everyday routines of life melt away, as Guests buckle in and soar with Dumbo at Magic Kingdom or cheer as Mickey Mouse and friends roll by on a parade float. But, when I dose of the outside world creeps into a Disney Park – it definitely goes noticed.

While it’s extremely common to see Walt Disney World Resort or Disneyland Resort advertising on multiple platforms, it looks like they are now allowing other companies to advertise from within the Parks with a new Enterprise sponsorship that was recently spotted on a bench at Disneyland Resort.

Partnerships are nothing new for Disney. We’ve seen Scentsy become Disney’s official home fragrance with a special spot at the EPCOT International Flower & Garden Festival. Coca-Cola has its beloved Club Cool at EPCOT. Lyft and Disney partner up for its Minnie Van service. Even State Farm now has a new Car Locator feature in the My Disney Experience App.

But, when @hastin posted a photo on social media showing a new Enterprise sponsorship bench near Luigi’s in Cars Land at Disney California Adventure Park… Disney fans were quick to comment.

The ad is in Cars Land which makes sense with Enterprise seeking to advertise there with its transportation theme. The bench seating back notes, “We’ll get your road trip… on the road.” But, in the comments, it seems like the consensus is the ad is “tacky”.

Does Disney’s new bench advertising give off Six Flags vibes?

Another comment notes, “while sponsorships are nothing new for Disney, outright ads on benches feels low”

Plus, there are plenty of comments noting “that is tacky” and “this feels kind of… cheap.”

The Walt Disney Company has recently announced advertising will be coming to its Disney+ platform, but seeing those advertisements creep their way into a theme park is an interesting twist.

Are more Park bench advertisements expected to arrive in the Disney Parks? Or will Disney see the comments from its fans and take note of the Six Flags vibes it gives off? Only time will tell.