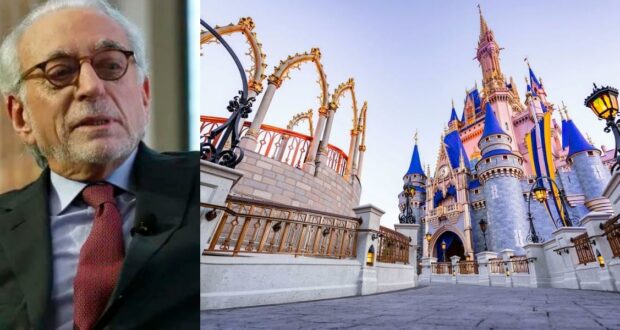 The Walt Disney Company is closing the castle gates and is making its push to keep activist investor Nelson Peltz out of the proverbial round table that is the Board of Directors, arguing that he knows nothing of their business and is no friend to the current established leadership.

In a presentation filed with the United States Securities and Exchange Commission, the Mouse House made its case that returning CEO Bob Iger and its current Board of Directors with a newly-appointed Chairman, former Nike CEO Mark Parker, were best for its future. 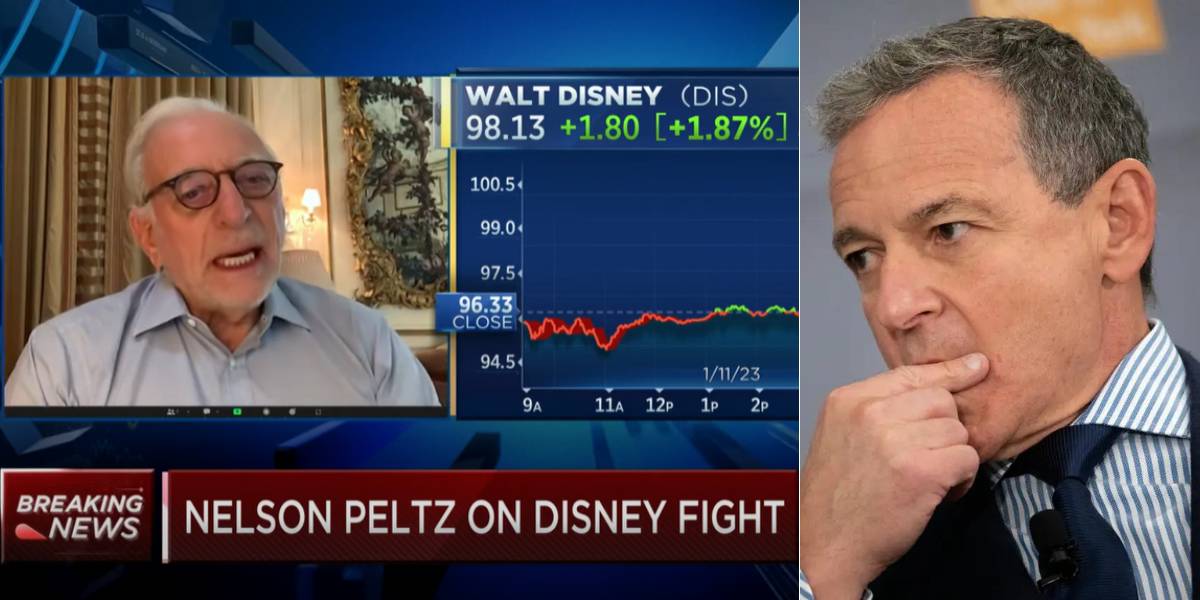 Disney states its “independent, highly qualified Board has provided strong oversight focused on delivering superior, sustained shareholder value” and that “Nelson Peltz does not understand Disney’s business and lacks the skills and experience to assist the Board in delivering shareholder value in a rapidly shifting media ecosystem.”

Mr. Peltz, who heads the Trian Fund Management, an investment firm that reportedly holds 9.5 million shares of The Walt Disney Company, made his case last week on CNBC’s “Squawk on the Street” after formally submitting his proxy bid to join the Board of Directors. At that time, he claimed to be a friendly, saying that he and his firm were not out to oust Iger and that the boards he has served on have significantly outperformed the S&P. But Disney refuted these claims, pointing out that Trian Group does want Iger out and that they view his relationship with Chairman Parker as “too friendly.” They also pointed out that the MSG Sports Board, on which Mr. Peltz has sat since 2014, has failed to outperform the S&P. 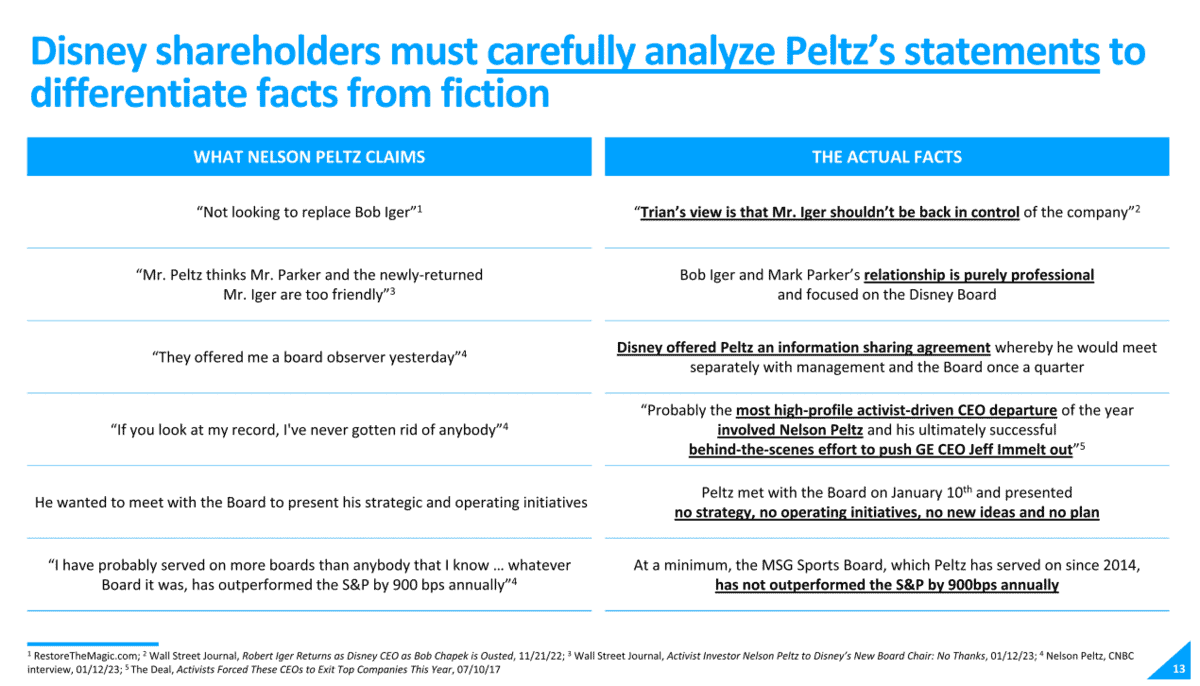 Disney highlighted that it more than doubled the S&P’s performance while Bob Iger served as CEO and that the vast amounts of acquisitions positively changed the Company for the better. While this previous year saw Disney completely eliminate its gains over the past five years, this presentation suggests they are ready to bet on history repeating itself in terms of returns under Mr. Iger’s reprised leadership. 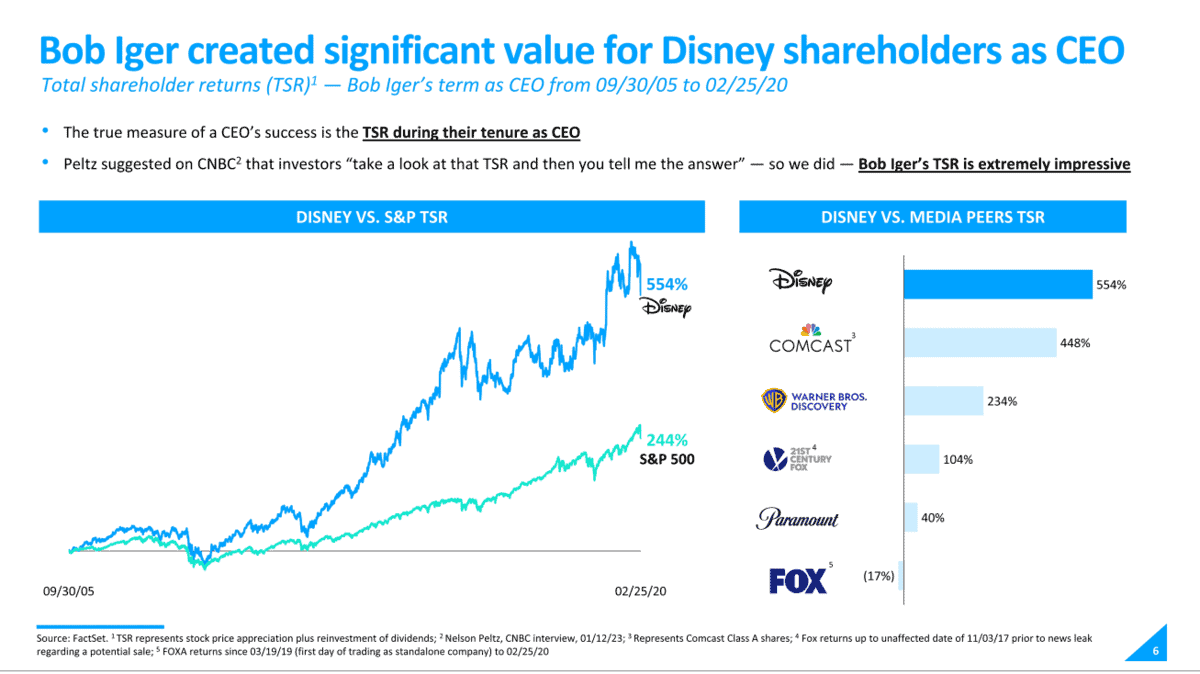 It should be noted that Disney has already admitted that this is a temporary fix, and as they gave Mr. Iger the mandate to find a proper successor in the next two years, they are looking to amend the mistakes of the short-lived reign of former CEO Bob Chapek by prioritizing its streaming business’ profitability, improving the Guest experience in its Theme Parks, and cutting costs. However, there is still no word on any intention to revive the shareholders’ dividend.

Click here to view the entire presentation for yourself.

The Walt Disney Company will hold its first-quarter earnings call on February 8, 2023.