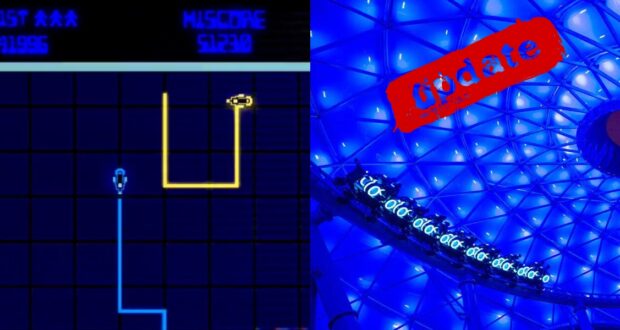 It looks like we now know at least what month TRON: Lightcycle/Run will be opening at the Walt Disney World Resort this year.

After its first classic arcade-themed tease last night, which had fans speculating an April 21, 2023 opening date, Disney Parks returned to Twitter today to drop yet another hint, but this time, it was a little more obvious.

Using the classic lightcycle game, two users race across the grid, tracing what appears to be the number 4. First, two fours appear, but one fades away, suggesting that Disney fans were right and can, indeed, expect an opening date sometime in the Month of April. However, some fans think that both 4s could signal April 4.

Welp there's your 4 for april

What is clear, though, is that an April opening matches the consensus among fans who “decoded” the previous message to say April 21, 2023.

First opening in Shanghai Disneyland in 2016, and then promised as an addition to Walt Disney World Resort’s Magic Kingdom Park in 2017, TRON: Lightcycle/Run has been under construction next to Space Mountain for years, taking longer to build than the entirety of the Magic Kingdom, and shuttering the Walt Disney World Railroad in the process. Disney Parks Chairman Josh D’Amaro confirmed a Springtime opening for the indoor/outdoor coaster at the D23 Expo last September, but no official opening date for the attraction had been announced. All we can do now is stay tuned to see what other hints Disney Parks wants to throw our way.

Disney World describes its new roller coaster, in part, as the following: