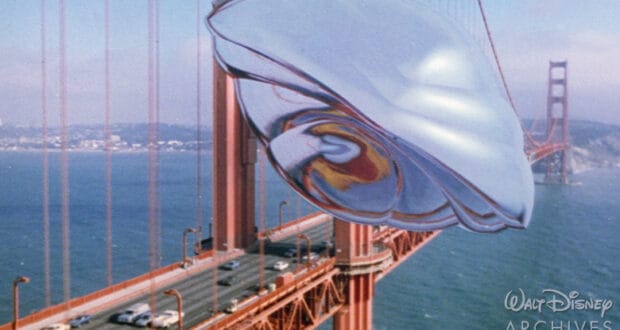 If you happen to be a longtime fan of Disney shows and movies then you already know by now that there have been some excellent examples of time travel and time/space alterations incorporated into several Disney works throughout the years. From Disney Channel Originals to theatrically released feature-length films, and even a direct-to-video follow up to a beloved classic, we are listing 13 of our favorite Disney recommendations dealing with the time-space-continuum or alternate time/space changes in some format.

This computer-animated Disney-Pixar hit from 2015 may not seem at first like the most obvious time travel work, but when you really think about it, the entire storyline is set in an alternate past in which the dinosaurs were not wiped out and were then able to coexist in prehistoric times alongside human beings. So on that note, this makes an excellent time alteration-centered Disney film to unwind with.

After the original 1950 animated classic there have been two direct-to-video sequels, which were produced decades later. And it was in this third installment from 2007 that we get to see a little time/space interference following a situation that results in Lady Tremaine getting her hands on Fairy Godmother’s wand. She uses it to go back in time, change the glass slipper size as to fit Anastasia rather than Cinderella, and in doing so opens up a whole new can of worms and a brand new, unforeseen storyline that will have the most diehard Cinderella fans at the edge of their seats.

Related: Cinderella Gets A New Comic

Alternately named A Spaceman in King Arthur’s Court, this 1979 Disney film is a modern retelling of the Mark Twain classic A Connecticut Yankee in King Arthur’s Court. The protagonist in this film adaptation is a NASA employee, who while traveling at the speed of light via NASA spacecraft, manages to travel back in time to King Arthur’s time, in Camelot.

Here is another take by Disney based off of the same Mark Twain classic. In this one, released in 1995, a kid from Southern California finds himself transported back to King Arthur’s time following an earthquake and while there, uses modern technology to impress the people and initially help them with very unconventional, antiquated problems of those mystical ancient times.

This film from 2000 is a very unique work in the way of time travel because the main protagonist, played by Bruce Willis, doesn’t actually travel back to the past. Rather, he comes face-to-face in his present time with the past version of himself from when he was eight. It’s a very thought-provoking journey for both key players, man and boy alike, as they seem to be coexisting in the same time and space, and are seen by others in their current lives, but at the same time are one another, decades apart. Think of it as Scrooge meets the Ghost of Christmas Past only it is himself still living in a parallel present time. In some ways it’s a psychological reflection on past dreams once thought to be dead still having a chance to be fulfilled, even if much later in life. It’s never too late, and all those childhood dreams, will eventually come true.

Back in 1999, when we were still living in that now-distant 20th century, this Disney Channel Original Movie premiered, followed up by two sequels—Zenon: The Zequel in 2001 and finally Zenon: Z3 in 2004. For this film franchise the story follows a 21st century teenage girl, Zenon, who is living onboard a space station orbiting planet Earth in the year 2049. While each of the three films have their own plots, the very core of all these storylines rest in the fact that this movie takes place in a space-age “distant” albeit not so distant future.

From the years 2004 to 2006, avid Disney Channel watchers got to enjoy this fun and fanciful science fiction series about a futuristic family trying to live in the primitive 21st century. As the storyline goes, the Diffy family left their current time in 2121 for a family vacation to the past (something not uncommon for people in their time to do). With their rented time machine having malfunctioned, the family now finds themselves indefinitely stranded in the year 2004, trying to blend in as a “normal” family.

Here is another, more recent Disney Channel series that throws in a time travel component. Running from 2015 through 2016, this short-lived comedy featured two teenage best friends who, through strange circumstances, develop the ability to travel through time, so long as they are thinking about the same time they want to travel to and maintaining physical touch while doing so.

Related: Who Would Be Your Disney Channel BFF?

Released in 2010 by Walt Disney Pictures and produced by Jerry Bruckheimer, this film based on the Prince of Persia video game trilogy is another to feature elements of time travel in its plot. In this case, there is a rewind effect going on, as the film’s primary players—in this case a fugitive prince and princess—must join forces against a common enemy to prevent world destruction by way of a mysterious dagger, which contains the Sands of Time and has the ability to reverse time and enable its possessor to rule the world.

Released by Disney 2018, this live-action film adaptation, based on the popular book series by Madeleine L’Engle, follows the story of a girl, her brother, and her friend on an adventure through time and space on the ultimate questionable quest to find her missing astrophysicist father. Under the guidance of three peculiar astral aids, this very insightful venture through time and space is an in-depth journey that’s by and large beyond compare.

When this Disney Channel Original Movie premiered back in 2008 it was an absolute hit. Perhaps maybe because its scenario centers around a problem most can relate to—a past embarrassment and a sincere desire to go back in time and have a redo—preventing said embarrassment from ever even occurring. And that’s just what the three kids in this film do—create a time machine for this select purpose. But unfortunately, there are consequences to meddling with and altering time, which is why this movie excels at grabbing the viewer’s attention so precisely.

With Disney’s plans for a reboot reportedly in the works, this science fiction film from 1986 remains a cult classic. It recounts the tale of a 12-year-old boy who, while walking through the woods in 1978, gets abducted by an alien spacecraft for what seems to be a very short amount of time. But when he is returned, he finds himself in the year 1986 with everyone around him aged accordingly but he, however, remains unchanged.

This is perhaps one of Disney’s best time travel-focused films of all time. Consider it a Back to the Future-minded computer-animated presentation in which a brilliant orphaned boy, who has always longed for a family, invents a machine intended to tap into memories long forgotten in hopes of recalling his birth mother. But things get crazy when an unknown fiend meddles with his invention and then a mysterious boy from the future shows up making for a time travel adventure grounded in family discover far beyond what anyone could have possibly imagined.

Related: These Are the Disney Characters You Want to Have A Holiday Gathering With

On that note, we invite you to kick back and continue enjoying the unending magic of Disney movies and shows in a timeless celebration of past, present, and future alike.