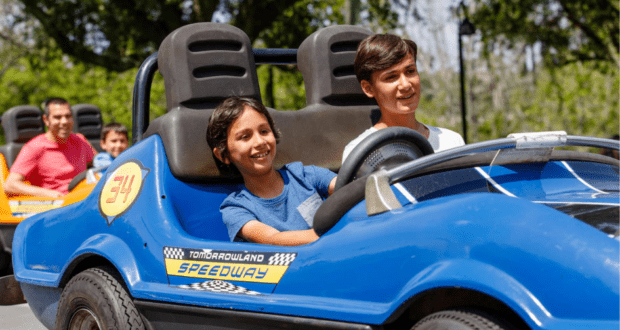 Eight of the Most Overrated Rides at Disney World

For diehard Disney fans, it may feel inherently wrong to talk down any Walt Disney World ride. But if we are honest, not all Disney rides are created equal, and some fall short of our high expectations. Whether the wow factor leaves us feeling a bit underwhelmed or the wait times build up our anticipation only to leave us disappointed in the end, some Disney rides are bafflingly popular for seemingly no real reason at all.

So, to give you a sense of what to expect when making your ultimate decision on whether to ride or forgo such experiences entirely, we’re letting you know upfront about eight of the most overrated rides at Disney World.

We’re not trying to bash this peaceful, slow-moving dark ride over at Pandora – The World of Avatar in Disney’s Animal Kingdom Park. It offers a rather tranquil experience for on-the-go Park-goers to snag a bit of relaxation as they float along via vessel on the Kasvapan River, taking in all the whimsical sights of the bioluminescent forests in search of the Shaman of Songs.

Yet, given its status as one of the two newest rides to be added to the Park lineup of attractions over the last few years, it’s still one of that shiny-new must-dos that garner lengthy lines and massive waiting times. And for some, that begs the question of whether it’s worth it.

Truth be told, many feel that wasting so much time just standing in line in pursuit of an attraction that is far too similar in experience to other known Disney boat rides, like “it’s a small world” or the Gran Fiesta Tour Starring the Three Caballeros makes it too cliché to be worth the wait. 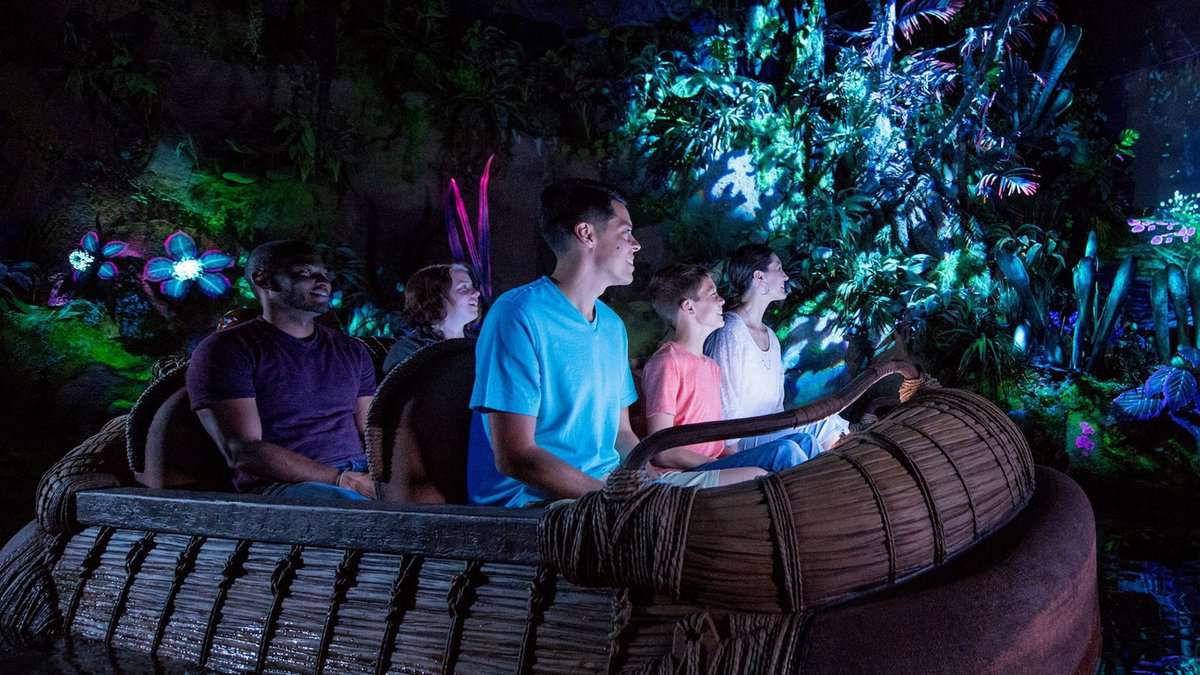 It’s good to see Disney bring in more family-oriented rollercoaster attractions, as riding restrictions, particularly for coasters, are too common throughout many other theme parks. But as is the case for Na’vi River Journey over in Animal Kingdom Park, most of the appeal for the Slinky Dog Dash Roller Coaster rests in its status as being that shiny new toy everyone wants to play with.

We see it time and again whenever a new attraction comes to Disney World, regardless of how good it is; Toy Story Land opens at Hollywood Studios, and now you’re going to have many years of visitors who may not have made it back to Disney since then trying to catch up on all the latest attractions that weren’t there before. And rollercoasters, in particular, are always the thing that thrill-seekers go for first.

But as we said, Slinky Dog is a family coaster that may disappoint those looking for a full-throttle adrenaline rush rather than a cutely themed experience laden with springy twists and turns. For these people, the most climactic part of the riding experience is finally moving up in line to be next to the ride! Here is another in the new batch of attractions that premiered at Hollywood Studios in conjunction with the opening of Toy Story Land. Located in Andy’s Backyard, it is a completely conventional take on those classic spinning whips rides we’ve all seen repeatedly showcased throughout countless other theme parks and carnivals for many years now.

Sure, they put a nicely themed spin on things, giving it a Pizza Planet Aliens motif featured in the Toy Story film franchise. Besides, there is nothing special about this ride that should ever garner wait times that can sometimes extend well beyond an hour.

Let’s be real, you’ve probably already ridden this same ride in some other format elsewhere. So, you’re not missing out on anything novel and new if you step out of line in pursuit of something better. 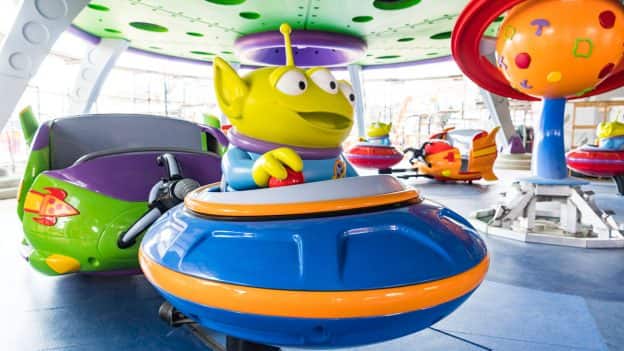 There is a long-running joke about the forever lengthy wait times connected to this dark ride attraction staple, which can be found in Fantasyland at Disney’s Magic Kingdom Park.

Most people know that if you want to ride Peter Pan’s Flight, you’re looking at a minimum of 45 minutes standing in line on a good day and much longer during Park peak times. Because it is such an iconic classic, most folks already know by now that it is a slow dark ride based indoors that doesn’t do anything overly elaborate in the way of special effects or features.

You’re more or less flying by over recreated scenes from the beloved classic animated film Peter Pan from 1953. So why all the hype? That continues to be the million-dollar question. But regardless, it continues to be one of the most sought-after attractions that we continue to wait in line for just the same. 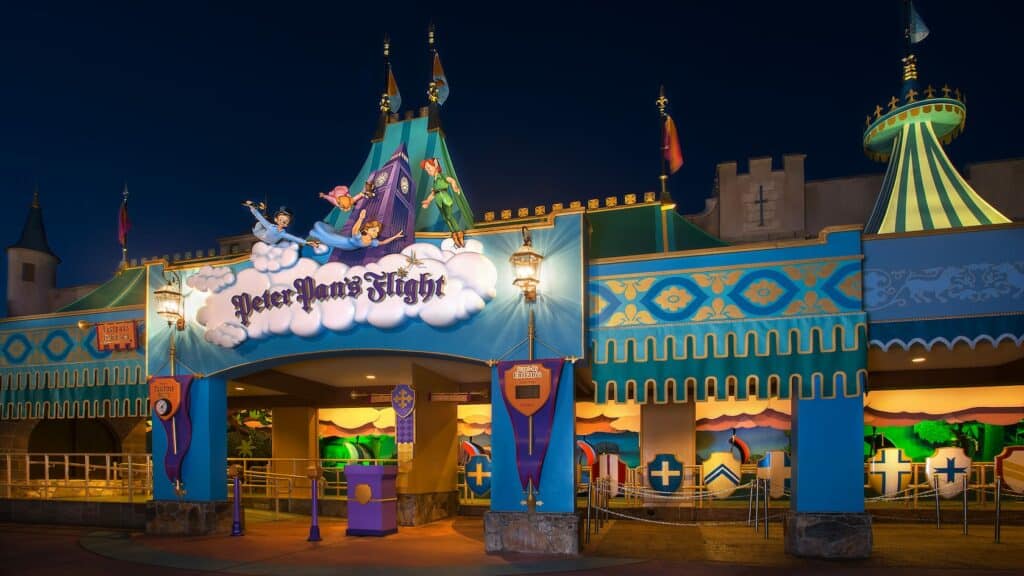 Related: 7 Impressive Facts about Peter Pan’s Flight You Might Not Know

Here is another Fantasyland staple that continues to draw in visitors to Magic Kingdom Park. Themed for the Walt Disney Animation classic Alice in Wonderland from 1951, riders take their seats within giant tea cups, which then spin at high speeds that riders are in control of.

But for those who dislike spinning so much, this is one attraction that seems like a perfectly good waste of time and energy. Save the vertigo inducement for something that’s far more worth your while, like Mission Space in EPCOT! 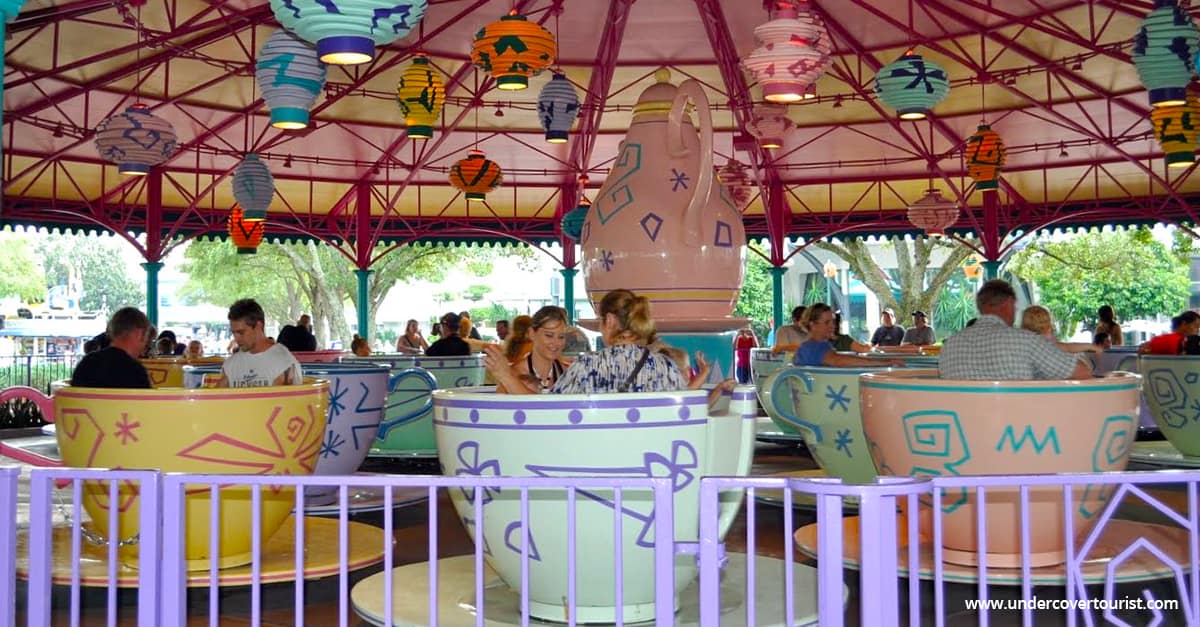 Over in Animal Kingdom Park’s DinoLand USA, you’ll find this circular gondola-like style ride. In following the whole dinosaur theme, this section of the Park is known for, up to four riders may ride along in a single triceratops-themed car that then lifts up and down, with riders being in control of how high or low they go as the ride rotates on a circular loop.

But honestly, haven’t we already seen this ride before? Think back to Disney’s classic Dumbo the Flying Elephant ride. It’s the same exact model, with TriceraTop Spin offering up absolutely no variation aside from theming (at least the similarly modeled Magic Carpets of Aladdin has/had a spitting camel feature to liven things up a bit). 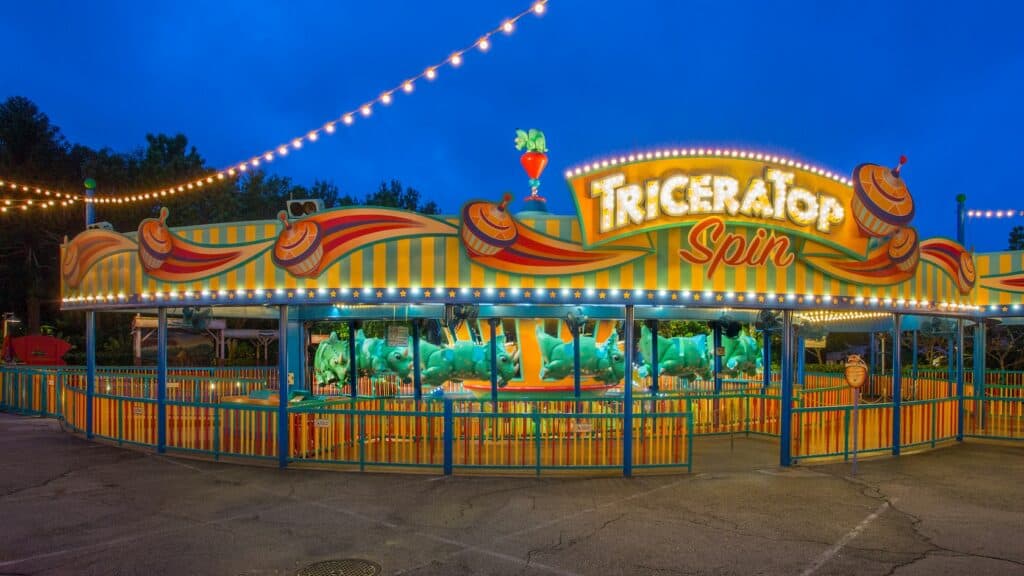 Following the same path in redundancy as TriceraTop Spin, this like-minded circular gondola ride again falls into the category of underwhelming attractions that just aren’t worth the wait time. The true charm for Dumbo the Flying Elephant arguably rests primarily in its status as a rite of passage Disney classic, but such charms do not appear to extend to other attractions, which are pale imitations at best.

Aside from a space theme, the only thing that elevates Astro Orbiter is, quite literally, its elevation. Guests must take an elevator up to the top before embarking on the actual ride. But really, is it worth all that? 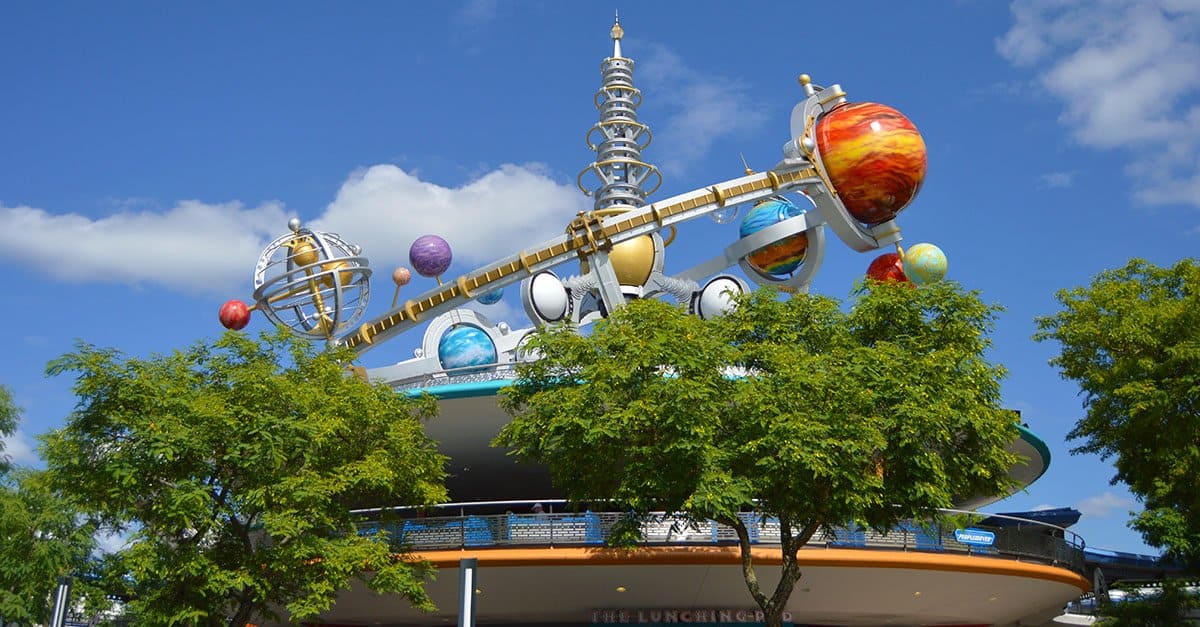 This may very well be, hands down, the most overrated attraction in all of Walt Disney World Resort. Located within Tomorrowland at Disney’s Magic Kingdom Park, this really is your standard take-the-wheel, ride-along ride in a miniature car down a paved racing track. It truly is baffling that this is still such a popular go-to attraction. Its greatest success is arguably its overwhelming abundance of insignificance, at least where Disney standards stand. Related: 10 Lackluster Disney World Experiences That You Might Want To Skip

Opinions do tend to vary among Guests as to which Disney World rides are overrated and which ones are entirely worth it. That’s because everyone has their own individual interests and expectations to take into account.

Some would even argue that many of the Magic Kingdom’s slower classic attractions aren’t worth the time or experience, but for us, they are absolute must-dos. Still, each Guest must make their own decisions, catering to their own individual standards, which will, in turn, create their own varied magical experiences in accordance.