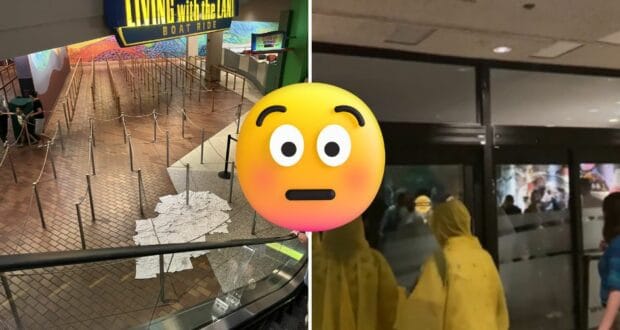 With Walt Disney World Resort in the heart of Central Florida, storms are expected… especially in the summer months. With a recent storm producing excessive rain, EPCOT’s The Land Pavilion couldn’t seem to keep the water out.

Those videos were taken on August 2, 2022, the same day it looks like EPCOT’s The Land Pavilion in the World Discovery neighborhood couldn’t seem to keep the heavy rains from coming inside.

On August 2, @DiscMan2000 posted two photos inside The Land Pavilion at EPCOT, noting, “Looks like some serious water damage at The Land pavilion. Water still dripping from the ceiling.”

Check out the photos and video below:

RELATED: Video – Guests Left Up in the Air During an Emergency Stop on Soarin’

The Land Pavilion at EPCOT is typically a perfect haven when the rain sets in. Inside the Pavilion, Guests can experience three attractions including the popular hang-gliding attraction, Soarin’ Around the World, the quiet fan-favorite Living With the Land boat ride, as well as a theater attraction called Awesome Planet.

If attractions aren’t what you are looking for, it’s also a great place to grab a bite to eat at Sunshine Seasons, a quick-service restaurant.

RELATED: Here’s Where You’re Most Likely to See a Lightning Strike at Disney World

But unfortunately, for these Disney Park Guests, the storm was so heavy that the theme park’s Land Pavilion seemed to have suffered serious water damage.

We’re sure, as usual, Disney was quick to correct the issues and likely is working to prevent future leaks from Florida’s occasional torrential downpours in the future.