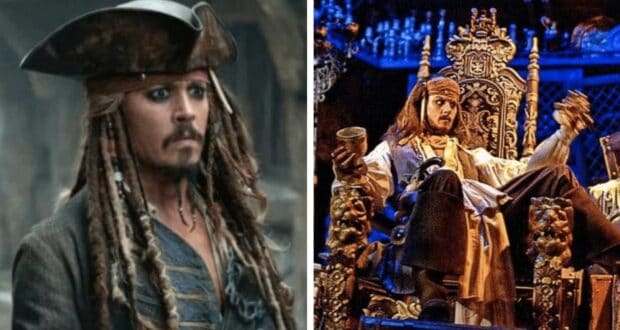 Actor Johnny Depp and his former spouse Amber Heard have been a big talking point lately due to their ongoing defamation trial against one another, and many Pirates of the Caribbean fans have been clamoring for Johnny Depp’s return to his role as Captain Jack Sparrow since part of Depp’s case against Heard involves alleging that her Washington Post accusations led to his loss of the iconic pirate role.

Now, Walt Disney World has chosen to advertise for the Pirates of the Caribbean Disney ride in the Magic Kingdom as part of its 50th anniversary — and fans of the Fantastic Beasts actor responded with negative comments about Disney’s timing!

In the Tweet above, Walt Disney World is promoting the Pirates of the Caribbean ride (which originally inspired the blockbuster multi-movie franchise that starred Johnny Depp, Orlando Bloom, and Keira Knightley) during Walt Disney World Resort’s 50th-anniversary celebrations.

However, because Fantastic Beasts actor Johnny Depp has been many fans’ focus in recent weeks (even resulting in multiple petitions being signed to bring him back to his pirate role), the mention of Pirates of the Caribbean instantly irritated many Johnny Depp supporters.

One user Tweeted “Sorry Disney…. You screwed up. There is no Pirates of the Caribbean without Jack Sparrow. No Jack Sparrow without Johnny…..” while another Tweeted “Very disingenuous of you to celebrate the Pirates movie when you let Johnny go without any evidence that what was alleged actually happened. Johnny is “Pirates of the Caribbean.” Without Johnny you have no Pirates franchise. This is why we will never visit the Park again.” Johnny Depp clearly stated during the trial that he would not return to his role, not even for $300 million. But the actor’s fans have not stopped pressuring Disney to bring Captain Jack Sparrow back, and it seems that Disney’s promotional Tweet has simply stirred things up more.

Have you been following the Johnny Depp and Amber Heard trial? Do you like any of the Pirates of the Caribbean movies that do not include Johnny Depp as the pirate Captain Jack Sparrow?