The Origin of a Controversy

Though it is now one of Disney’s most beloved attractions, the iconic Pirates of the Caribbean did not always look like the ride we know now. In its concept stages, The Pirates of the Caribbean attraction was envisioned as a walk-through attraction with wax figures depicting scenes of Pirates wreaking havoc and causing mayhem. However, with the success of the boat ride format of the It’s a Small World attraction showcased at the 1964 New York World’s Fair demonstrating “Peace Through Understanding” the concept was reworked. Pirates became A dark water ride, that integrated audio-animatronic technology, with several chaotic pirate scenes that would become synonymous with Disney Parks. 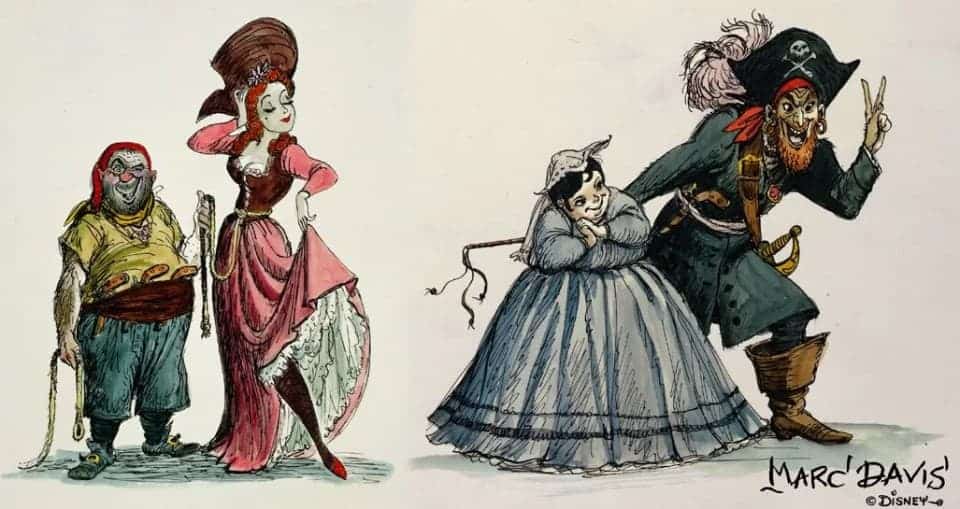 The Pirates of the Caribbean opened on March 18, 1967, in Disneyland. Sadly, it would be the very last ride that Walt Disney would participate in designing, officially debuting three months after his death on December 15, 1966. Located in New Orleans Square within Disneyland, the facade of the ride imitates the antebellum era of New Orleans, topped by a  31-star United States flag (the country’s flag from the years 1851-1858). And once inside, the boat ride launched from a dock in Laffite’s Landing (named after famed French pirate Jean Lafitte, 1780-1823), sailing into a peaceful blue bayou with glimmering fireflies, croaking bullfrogs, and the soft strumming of a banjo heard all around. But soon riders on their boats are sent down a waterfall and plunged into darkness, emerging into a different world entirely. As Disney himself described:

“And then, in here, we have a special attraction. We call it the ‘Blue Bayou Lagoon’. People are gonna get on a boat here, and ride through the lagoon. And then as they get around here, we’re gonna take them down a waterfall and take them back into the past into the days of the pirates, you know, where the whole Caribbean area was full of pirates and they were always sacking towns and things.“

Floating on through a ransacked town, guests come upon an auction, in which drunken pirates are encouraged to bid on the captured local women. A large banner advises the pirates to “Take a Wench for a Bride!” Guests first see the Auctioneer attempting to sell off a “stout-hearted and cornfed” wench of the town.

“Weigh anchor now, ya swabbies. What be I offered for this winsome wench? Stout ‘arted and corn fed she be…”

“Hey, are you selling her by the pound?”

The bidders show little interest and instead yell out for the “redhead” a flirtatious-looking woman waiting in the wings for her turn to go to the highest bidder, with a kind of delight. However, other women don’t take kindly to being sold off weeping as they are waiting in line and others that escaped their captors are being chased by the Pirates. 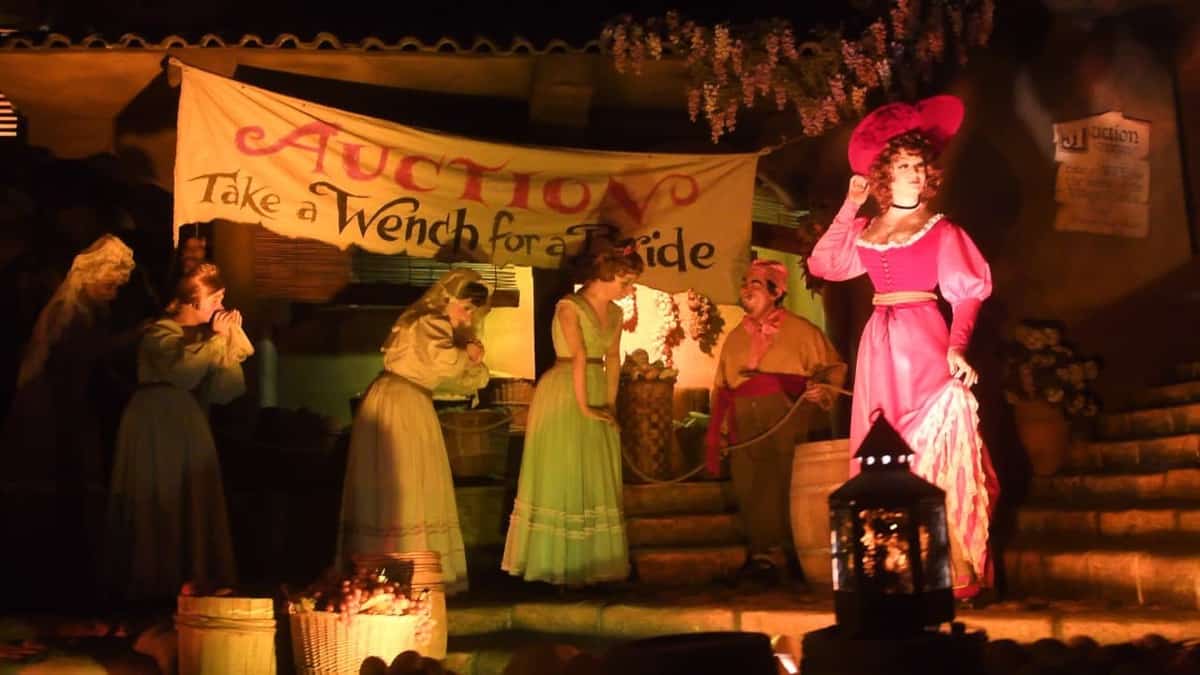 “We Want the Redhead!” 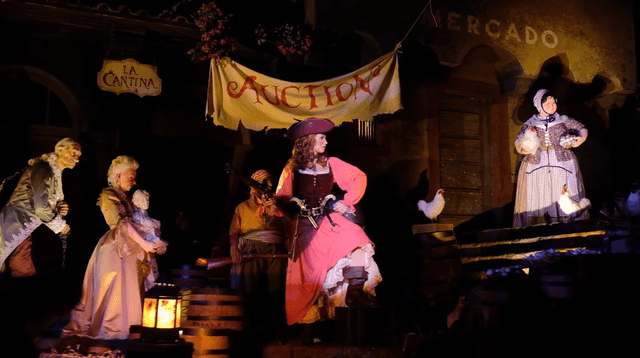 Updated Pirates of the Caribbean Auction scene featuring chickens and “Redd” the Pirate calling for the sale of rum.

Beginning with Disneyland Paris in 2017, followed by the Pirates of the Caribbean in Adventureland of Disney World’s Magic Kingdom on March 19, 2018, and ending with the original Disneyland attraction on April 23 that same year, the auction scene was changed. The original Bridal Auction was transformed to a scene where townspeople gave up their raided loot to a group of pirates. The Redhead, now re-branded as simply “Redd”, became a pirate herself directly involved in the proceedings. While the Disneyland Paris version of Redd doesn’t talk and retains the original figure’s face sweet, both of the American versions were updated with an entirely new figure with her own voice. The new narrative involved the auctioneer trying to offload a group of white chickens, while Redd retorts that “It’s the Rum they want!” went from selling herself, to selling a pirate’s favorite spirits. 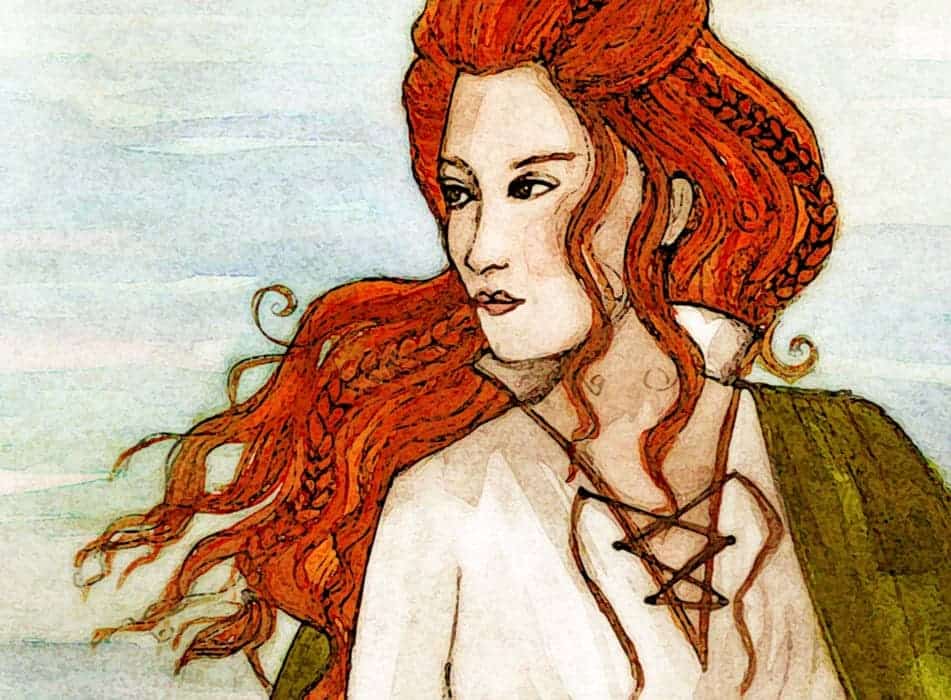 The featuring of a fiery redheaded pirate has historical precedence in the figure of Grace O’Malley (1530 – 1603). Known throughout history as “The Pirate Queen”. During her reign, O’Malley engaged in legendary acts of Pirating and Privateering off the coast of Ireland, and lead acts of rebellion against the English. This culminated in a historical meeting with Queen Elizabeth I, a negotiation between the Virgin Queen and the Pirate Queen. And while the meeting ended positively, when Queen Elizabeth did not fully honor her end of the deal Grace continued to act against the crown. However, O’Malley did not live in the time in which Pirates is set, nor did she pillage the shores of the Caribbean. No, the reason behind Redd’s change was not to pay homage to a real female pirate but to appease the voices of cancel culture.

Cancel Culture Catches Up to Pirates

In the wake of 2017’s “Me Too” movement on social media, many allegations of abuse, harassment, and general misogyny in Hollywood came to light on social media.  At the same time, many people drew attention to the famous show scene on the Disney ride that they deemed to be misogynistic. It was soon after that the initial changes to the ride in Disneyland Paris took place, and other Disney Parks followed. 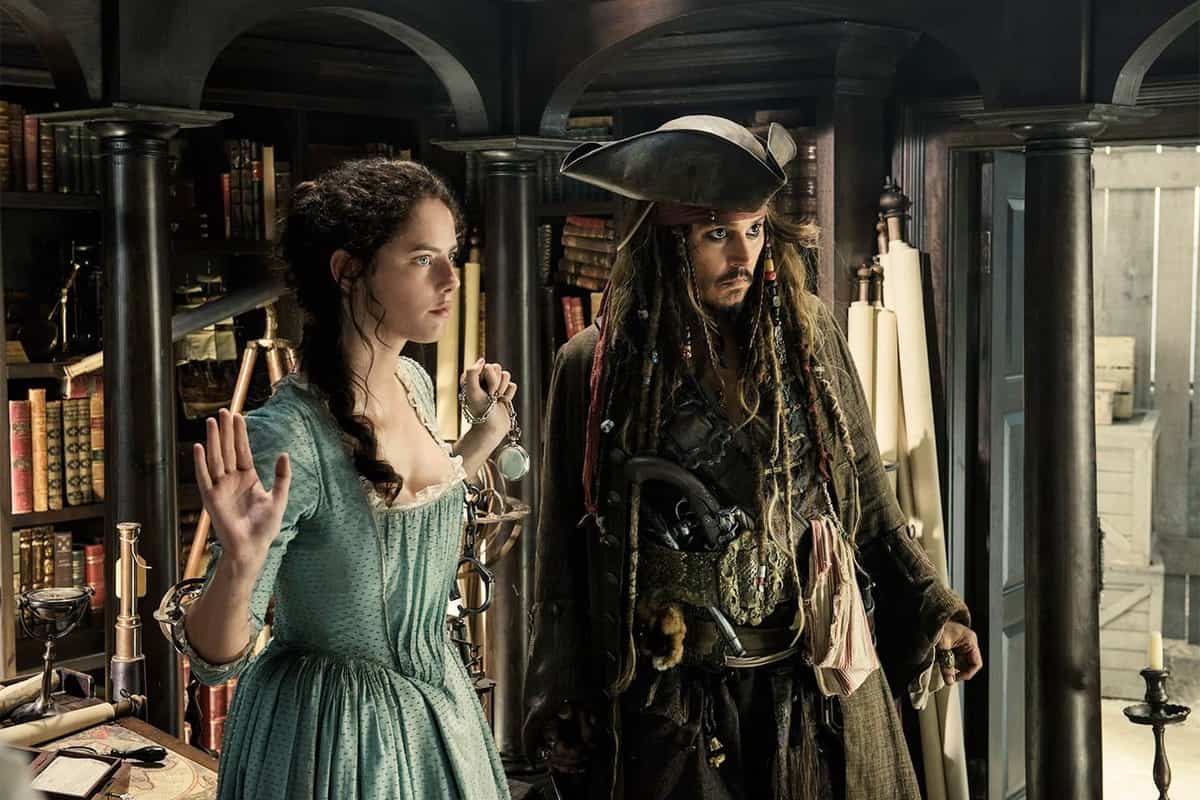 Kaya Scodelario as Carina Smyth and Johnny Depp as Captain Jack Sparrow in Pirates of the Caribbean: Dead Man Tell No Tales

The film was also not immune to the cultural changes taking place in entertainment, featuring a new character named Carina Smyth, a self-proclaimed “woman of science” in a world of ancient curses, ghost ships, gods and goddesses, sea monsters, and mermaids. Carina carried none of the charm of Pirates heroine Elizabeth Swan, who herself became a Pirate Queen in the series’ third installment At World’s End. She instead filled the one-dimensional “strong independent woman” stereotype seemingly mandated by Hollywood in modern film franchises. Though the new characters lacked charm and chemistry, the film was still a global success. The movie was led by the great Johnny Depp as Jack Sparrow, ended with a long-awaited reunion between beloved characters Elizabeth and Will Turner, and included a cliff-hanger end-credits scene which suggested the possible return of villain Davy Jones in the next film.

But a new Pirates film was not to be. On December 18, 2018, three days before Hollywood blockbuster Aquaman arrived in theaters, the film’s star Amber Heard, ex-wife of Johnny Depp, published an Op-Ed in The Washington Post titled, “I spoke up against sexual violence- and faced our culture’s wrath. That has to change.” This article was catastrophic to Depp’s reputation and career. And in the wake of changing their classic attractions to fit the social climate, the Op-Ed led to Disney dropping Depp from the multi-billion dollar franchise and sinking any changes of further films. 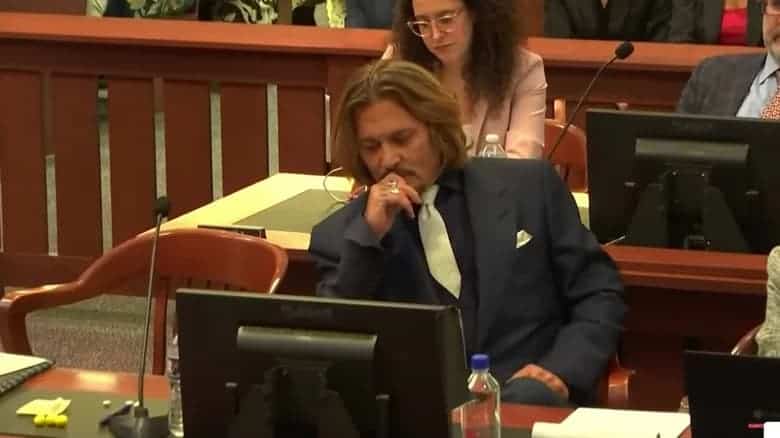 Though Depp’s defamation lawsuit against Heard is currently being played out in court, he has already won a huge victory in the court of public opinion. Many fans have publicly supported him after the overwhelming amount of evidence came to light that Depp himself was being abused and not Ms. Heard, and she furthermore intentionally used the height of her fame on the eve of Aquaman‘s release to slander her ex-husband and hinder his career.

In their shameless appeasement of cancel-culture with the changes to classic rides, their shameful treatment of Johnny Depp as a male victim of domestic abuse, and the growing politicization of Disney’s parks and films, many fans and some notable politicians are becoming fed up. Only time will if they will begin to make changes for the better. 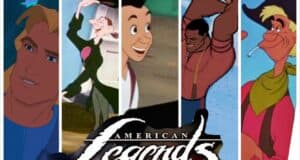 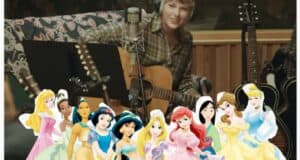