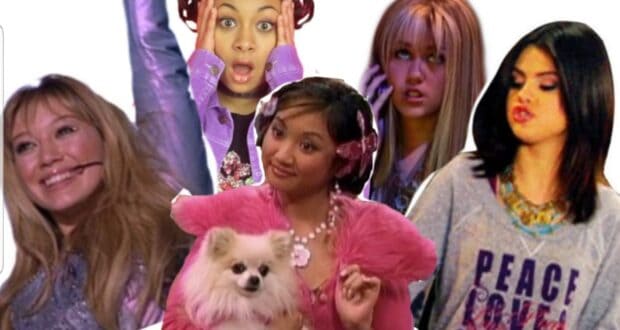 Channel the Fashion of Your Favorite Disney Channel Star

In August of 2020 former Disney Channel star Debby Ryan used the “What I’d Wear…” TikTok trend to take her fans on a nostalgic trip through her most famous roles. In the video captioned “What I’d wear to Fashion Week in…” the actress transformed into sleek modern styles of some of her best-known characters, including Bailey from The Suite Life on Deck (2008-2011), Jessie from Jessie (2011-2015), and the oft memed Tara Adams from the Disney Channel Original Movie Radio Rebel (2012).

Her clear love for the characters she began playing more than a decade ago is evident in her astonishingly accurate and fun outfit choices that pays homage to each of their unique looks. Taking inspiration from Ryan, here is how to channel the vibes of some of our other favorite female Disney Channel icons. 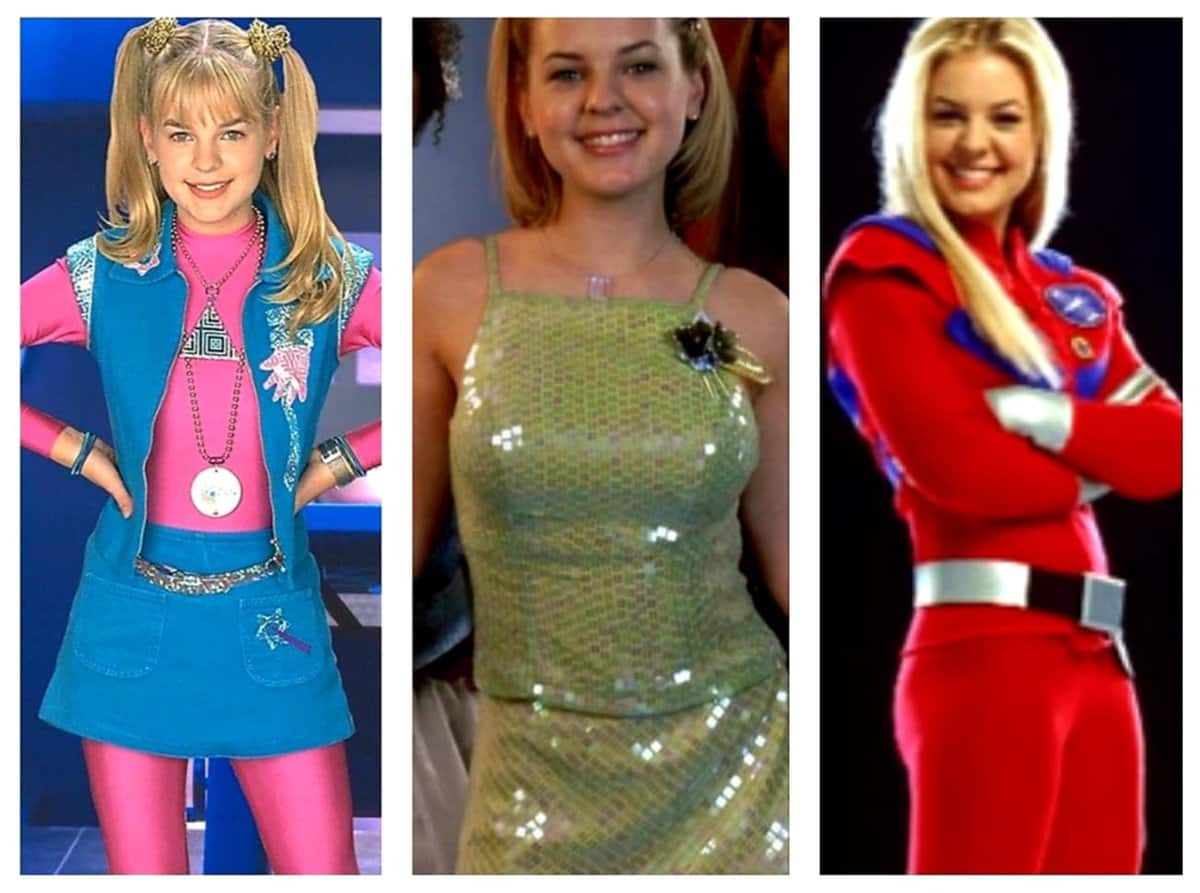 The DCOM film trilogy Zenon was inspired by the incoming new millennium at the beginning of the early 2000s. The first movie imagined a plucky fun heroine living life on a space station orbiting Earth in the year 2049, a year than 50 years away and now only 27 years away. The imagined futuristic look of Zenon’s millennium aesthetic included chrome and holographic details, leggings, short skirts and dresses, and defined angular shoulders. Those looking to channel Zenon vibes in the modern age should seek out a form-fitting blazer and pencil skirt combo, with a metallic jacket or skirt paired with a solid bright color. A look that says, “Yes I am sparkly, and I mean business.” 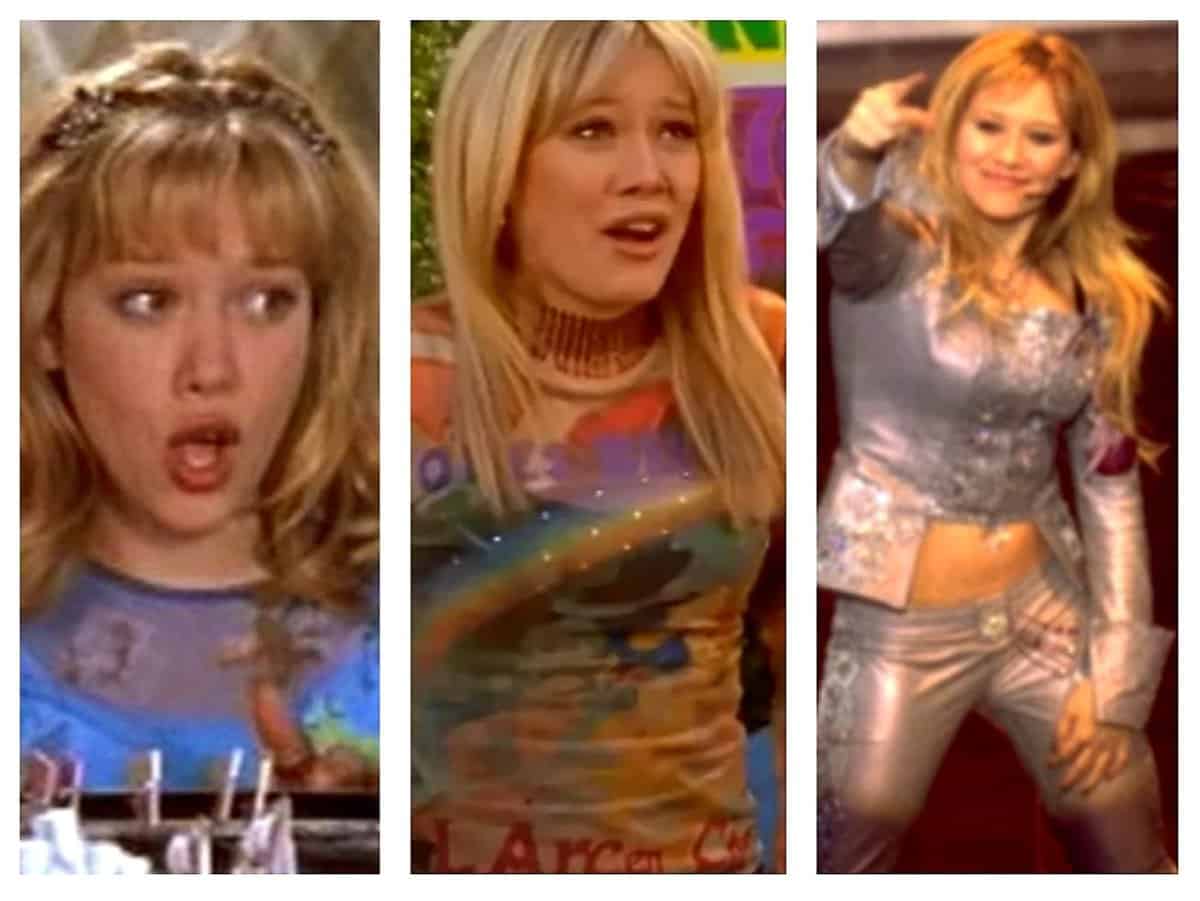 Hilary Duff’s Lizzie McGuire is one of the fashion icons of the early 2000s. Re-watching episodes of the Disney series is an extremely effective visual time capsule on the trends of the time. This is perhaps the very reason why Lizzie McGuire has endured as a beloved heroine and style icon, in the wake of a wide resurgence of the ’90s, and early 2000s fashion trends in recent years. Butterfly clips, scrunchies, chokers, graffiti tops, and low-rise jeans can all be seen regularly. But the greatest fashion moment for Lizzie was in the climax of The Lizzie McGuire Movie in the performance of “What Dreams are Made Of”. Lizzie tears off her Cinderella-style skirt to reveal low rise wide leg style pants, paired with a crop top, and a short blazer-style jacket all in dazzling holographic fabric. An homage to this look can be achieved with wide-leg acid wash jeans and a holographic or silver crop top. 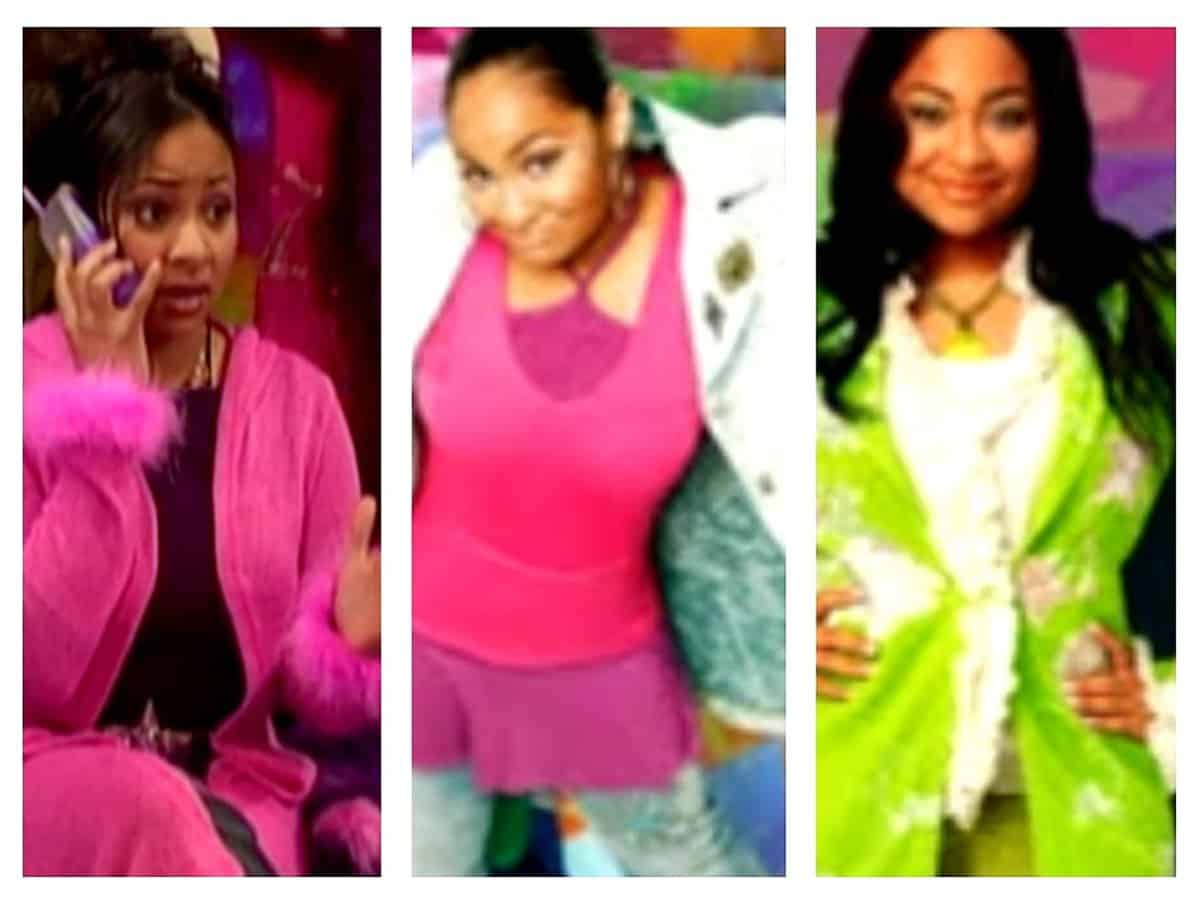 Raven Baxter may have been able to see into the future, but her real love was fashion. A plus-sized woman of color in a leading role with a signature sense of humor and outfits as bold as her personality, she was a true television trailblazer. Raven’s outfits often included brightly colored faux fur, long trench coat-style jackets, and very bold patterns and accessories. Faux fur is already seeing a resurgence in modern fashion, particularly in shoes. But to truly channel, Raven Baxter calls for a unique statement jacket, at a length almost like a cape trailing behind a Queen. 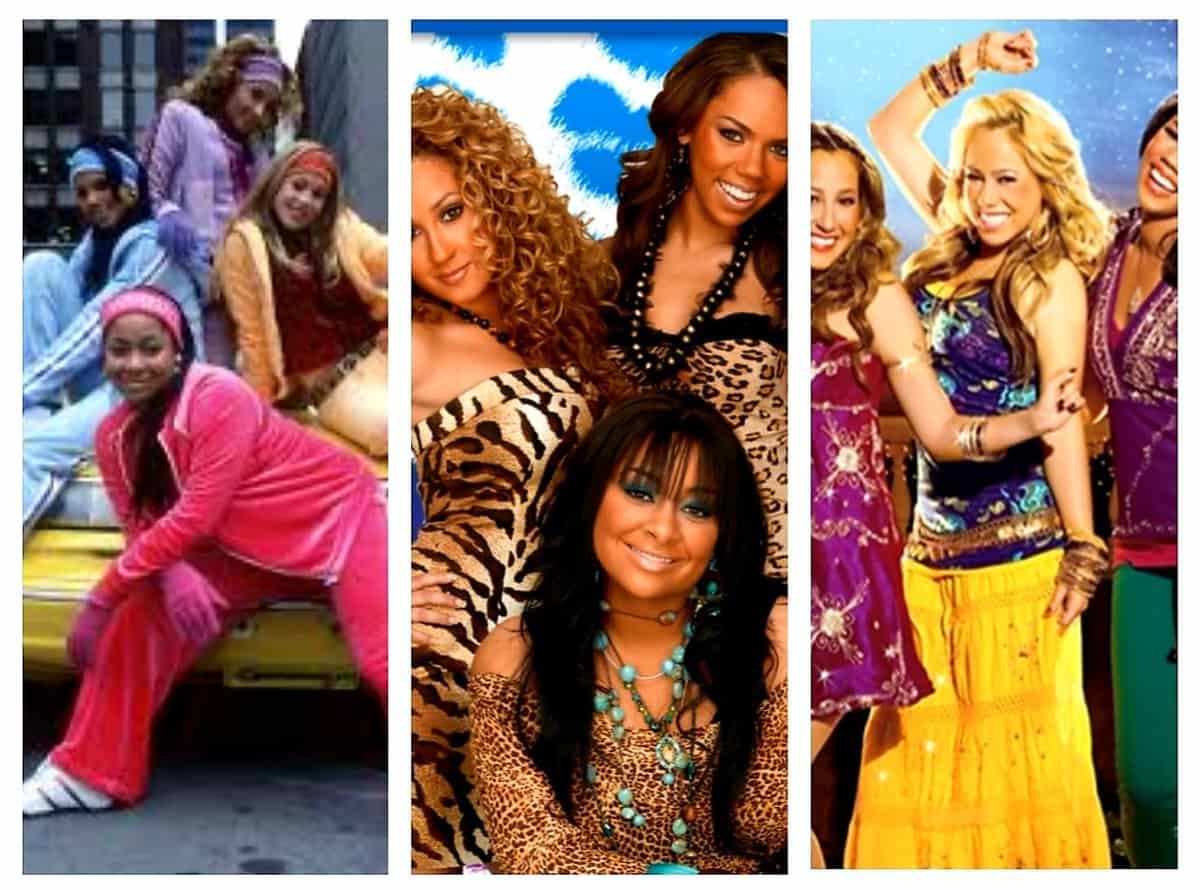 The influence of Cheetah Girls on fashion in the early 2000s was immediate and real. I remember – I was there. The nearly instantaneous demand for wild animal prints in outfits and accessories for girls was dramatically seen. Zebra print, tiger stripes, leopard spots, and of course the signature cheetah look. The cool girls in school had Juicy sweatsuits, Lisa Frank-inspired animal print school supplies and accessories, and (later on) the long boho-style peasant skirt all of which were shown on the Cheetah sisters in their three films. Since athleisure and streetwear have only grown in popularity, those looking to channel the girl band should try monochromatic leggings and a tank top combo with a matching headband. 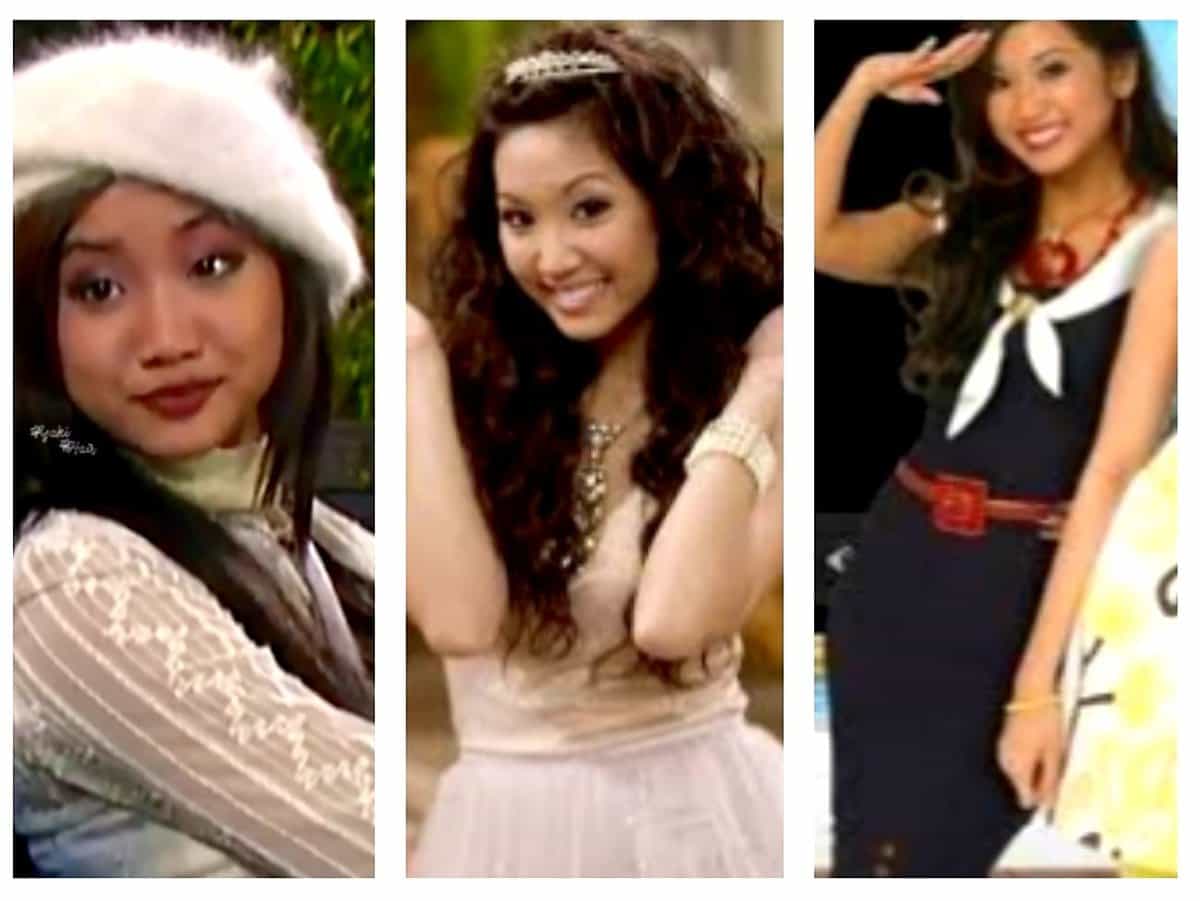 London Tipton was the comical airhead heiress of the Tipton hotel chain, modeled after early 2000s it-girl Paris Hilton. London Tipton consequently borrowed often from the real-life heiress’ style. Her outfits were often girly and preppy, never being afraid to be a little extra. London was known to be unafraid to sport berets, tiaras, and bows atop the “bump it” hairstyle made famous by Nicole “Snookie” Polizzi of Jersey Shore fame. The lesson the modern girl can take from London is to simply lead their best extra life. There is no outfit so girly and fabulous that it cannot also be elevated by a daring accessory. 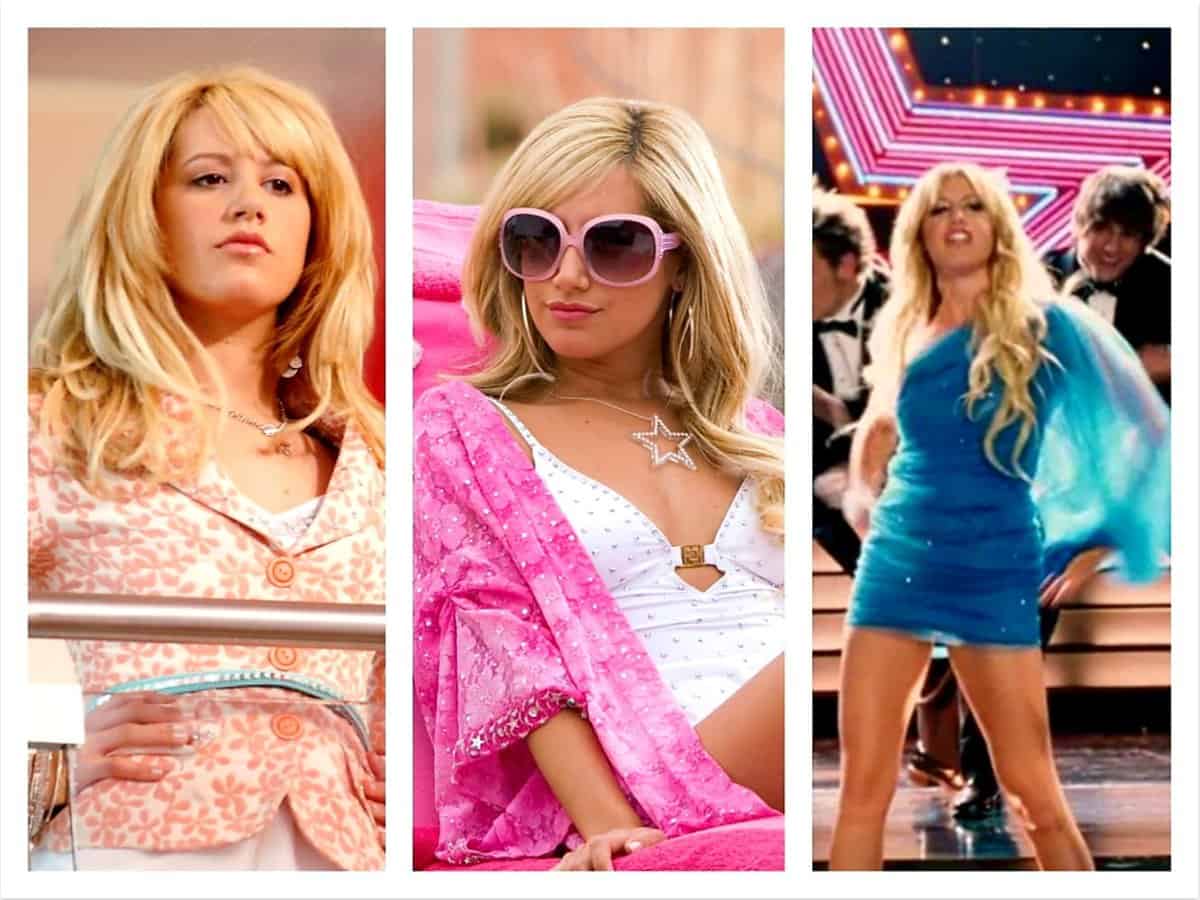 Sharpay Evans is the real hero of the High School Musical franchise and you cannot change my mind. The prelude to Glee’s Rachel Barry was a dedicated theater kid/tyrant, taking the archetype of “blonde mean girl” and elevating it to hugely comical levels. She was passive-aggressive and scheming; but was also passionate, hugely talented, and often sympathetic- all while looking fabulous the entire time. From her “Status Quo” prim-and-proper floral blazer to her iconic “Fabulous” white swimsuit and large round (oh-so-trendy) pink sunglasses, and her adorable asymmetric blue dress in her climactic final number in High School Musical 3 she shined. If one is attempting to channel peak Sharpay, attempting to find a dupe for High School Musical 2‘s peek-a-boo one-piece to wear while lounging poolside is the only way to go. 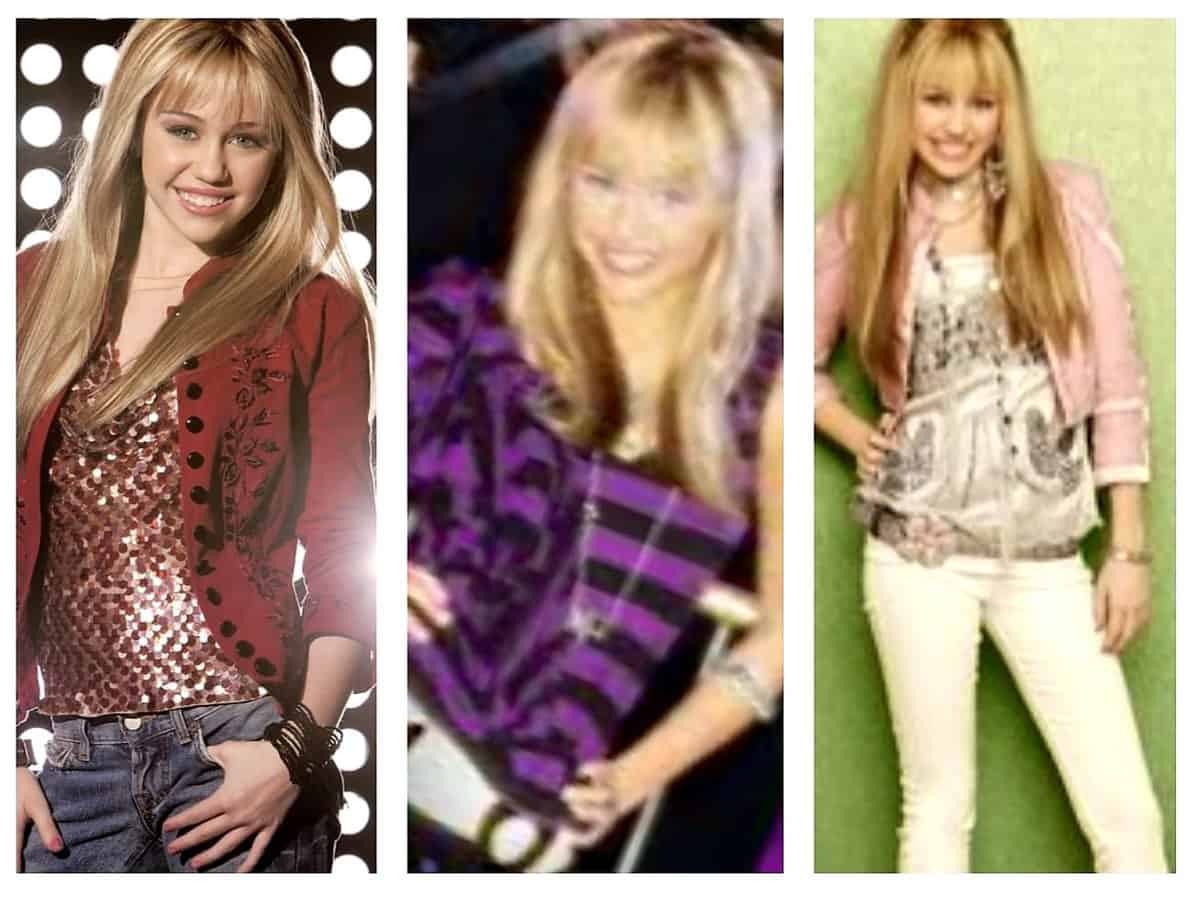 Miley Stewart was just like any other girl. often wearing simple layered tops and T-shirts and jeans. Likely a deliberate choice from costume designers, this was in stark contrast to Miley’s alter-ego rockstar Hannah Montana. Hannah Montana was always styled with many layers, bold patterns, and glamorous accessories. A simple T-shirt and white jeans, or tank top and jean skirt can be elevated to Hannah Montana levels with; bangle bracelets, long shining layered necklaces or thin patterned neck scarf, a thick statement belt, and some shiny lip gloss. If wanting to step out in one’s own rock star alter-ego for the night one need only take a basic outfit and dare to wear that bold accessory you would usually be too shy to try. 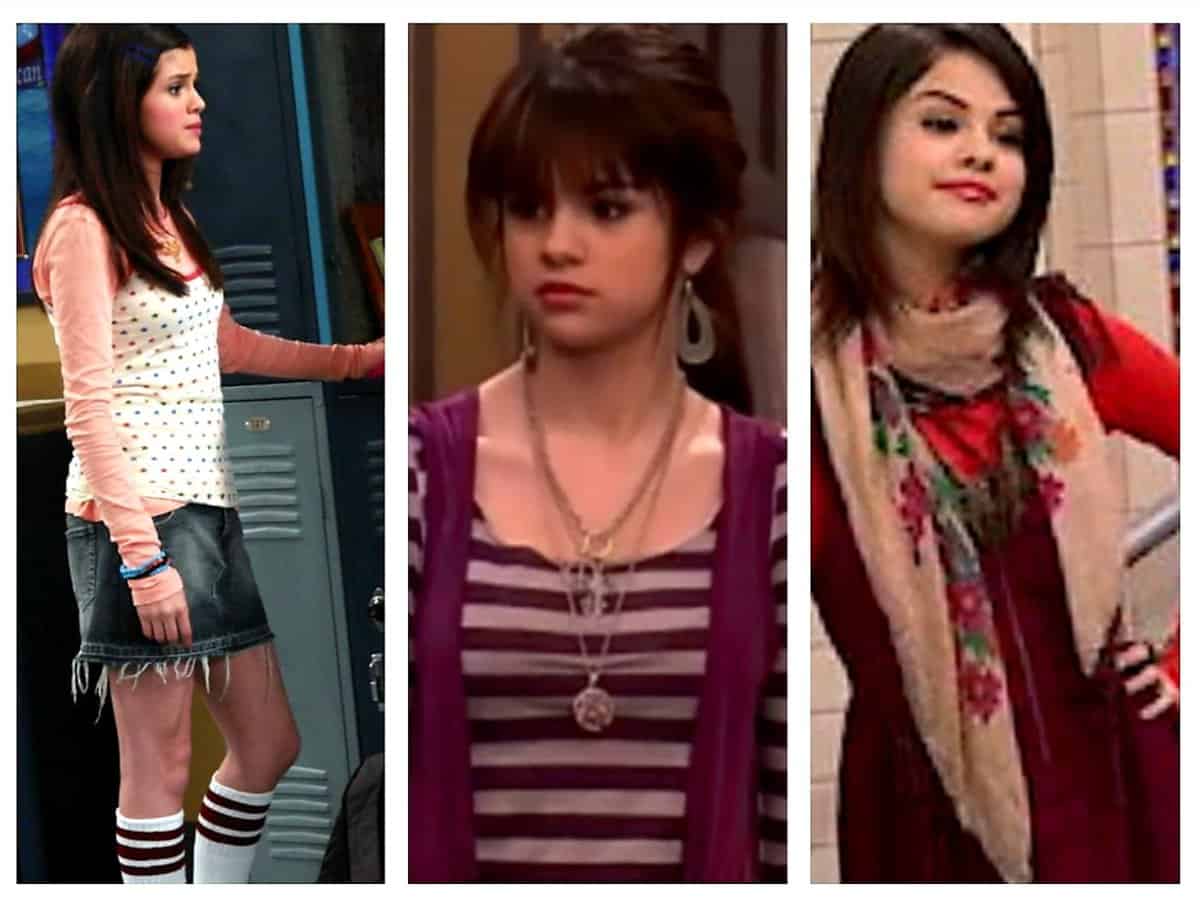 Alex Russo was perhaps my personal favorite Disney Channel fashion icon of all. Alex as a character was often messy, trying to take magic shortcuts and making mistakes. Through the course of the show, Alex gradually accepted more responsibility but also cultivated her own unique identity. As a result, through the course of the show her fashion changes along with her hair and makeup. She shows the most variety in growth in her interior and exterior self. She can be seen in season one as just an average fun girl with frayed jean skirts and athletic socks and a simple half up half down hairdo. Then she may be seen in season 2 looking bolder with a fun vest, more accessories, and a ponytail with chopped bangs. Only to move on to look more mature with a layered bob parted down the middle, a more distinctive makeup look, and fun patterned scarf. To try and completely capture Alex’s style is nearly impossible, one must simply pick the era of her many looks that they can best relate to. 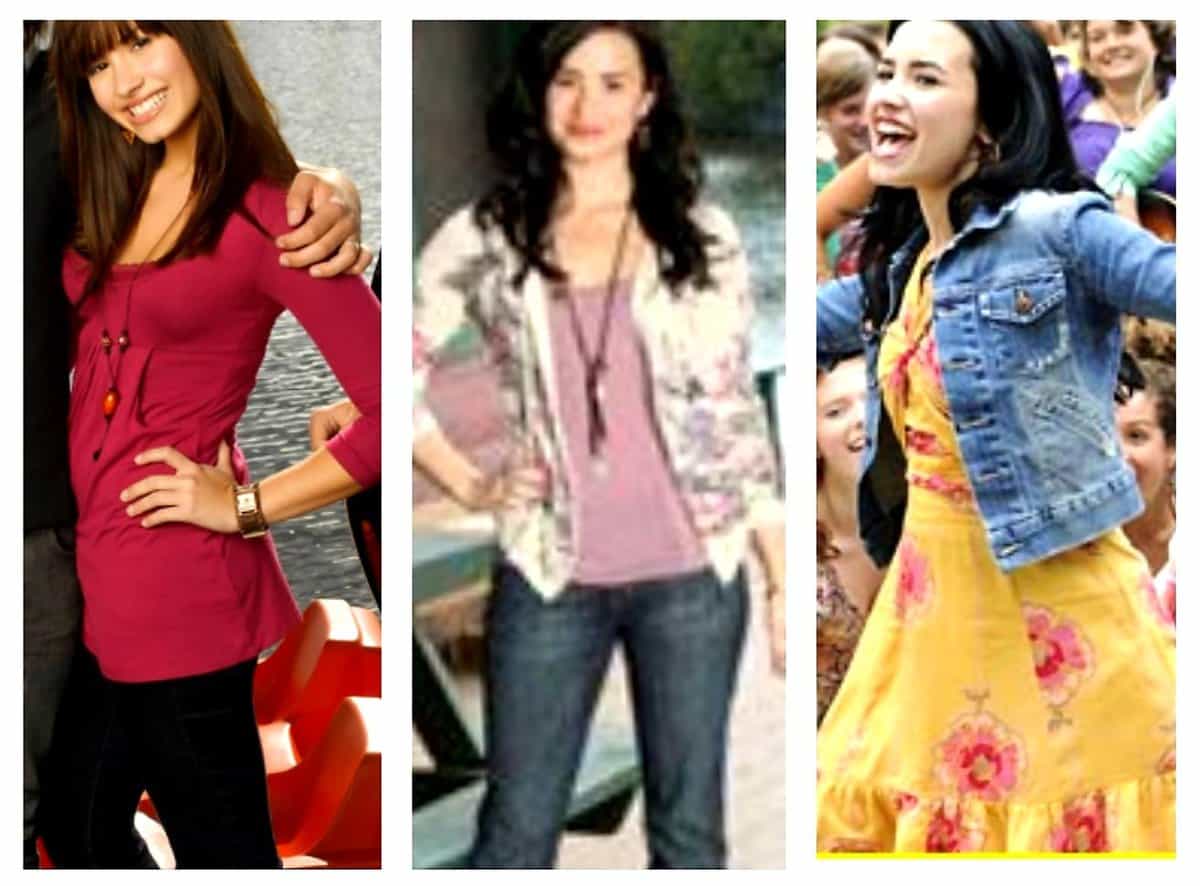 I love Camp Rock, especially the first film’s classic soundtrack that still bops to this day. But admittedly, I am not the biggest fan of Mitchie as a character, from her hiding her hardworking mom in shame during the first film to her overbearing attitude to her fellow campers in the second. Mitchie often comes off as selfish, and for the most part, she is rewarded for it. Does that change my love for the victorious ballad “This Is Me” or the powerful duet “Wouldn’t Change a Thing”? Absolutely not. And while I view the sequel as inferior, it has far better fashion moments. Mitchie’s looks in Camp Rock 2 consist largely of flowing floral pieces paired with denim in perfect harmony. In a floral cardigan and pastel tank with jeans or a floral sundress with a jean jacket, one can easily channel the hard and soft sides of Mitchie. 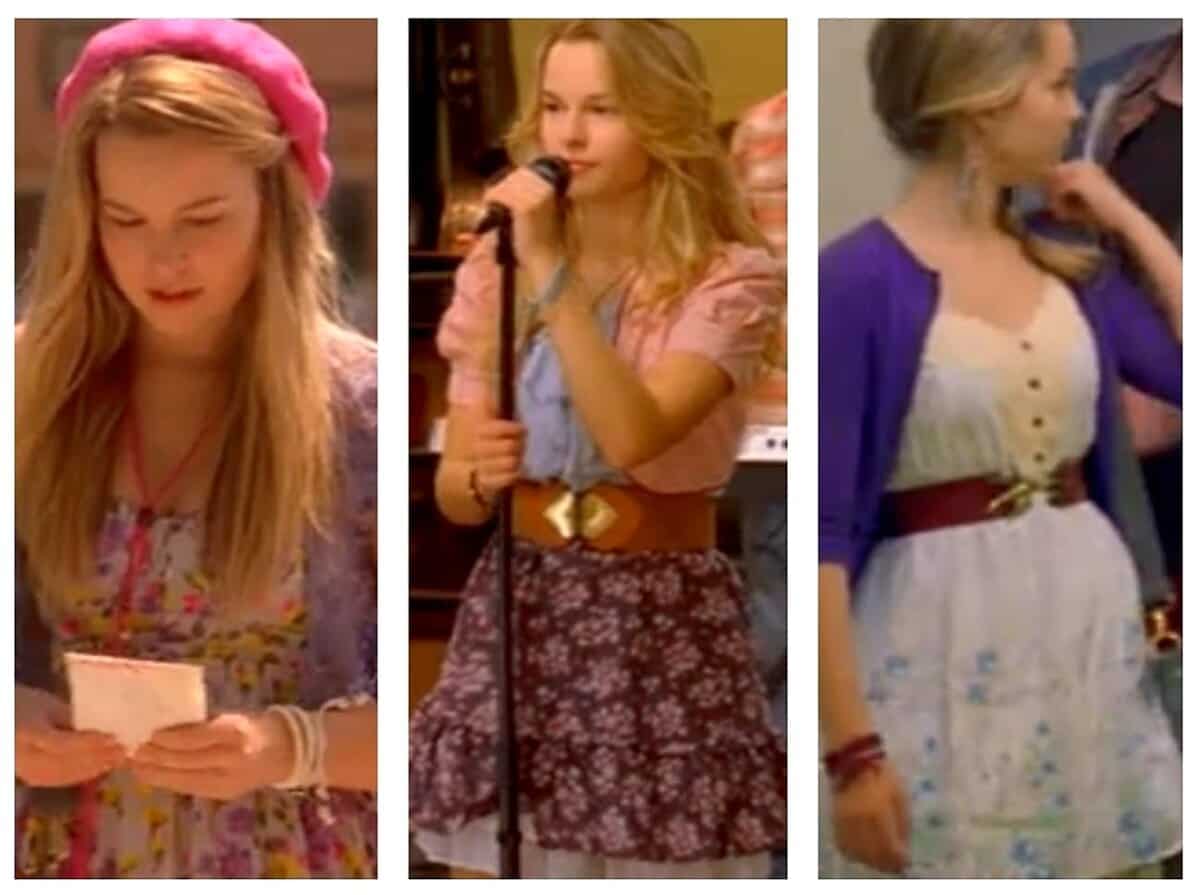 Lemonade Mouth was a film that came after the success of Cheetah Girls, High School Musical, and Camp Rock. Unlike those musical films, Lemonade Mouth did not become a global phenomenon, spawning a highly successful Disney Channel film franchise and/or live global tour. Nonetheless, it has garnered a cult following for its ensemble cast of distinct characters, and fun soundtrack. The lead singer voices the soundtrack and stands out as the most charming of the ensemble cast. This is the charming Bridgit Mendler’s Olivia, an artistic and sensitive girl who must overcome shyness to find her voice. Her style is marked by many loose, light florals, that highlight her delicate state. This romantic look can easily be achieved with a simple flowing sundress, shrug or cardigan, and brown leather belt and accessories.

Can you see yourself dressing like your favorite Disney Channel star in your everyday life?