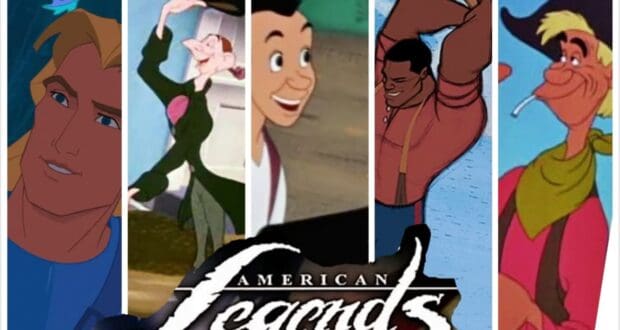 Sometimes real people do great deeds, and the stories of those deeds go down in history. Sometimes people create stories of impossible deeds around real people. And sometimes people invent great people to tell stories of impossible deeds. America’s legends contain all of these stories and more. Let’s celebrate America and all that it stands for, as the land of the free and the home of the brave, by revisiting great American folk heroes as told by Disney.

Based On: “America’s first fairytale,” the love story of John Smith and Pocahontas.

Known For: Being a member of the Virginia Company, helping found the colony of Jamestown, being captured by Cheif Powahawton, and saved from death by his daughter Pocahontas.

John Smith is one of the founding members of the Jamestown colony, a pivotal moment in American history. But like many important historical figures, there is little known about his general temperament, and intimate details of his life and even some aspects recorded in his personal writings are debated by historians. When writing the animated musical love story Pocahontas, they advertised their film as “America’s first fairy tale”.  Disney too aspects of recorded history, some details of John Smith’s relationship with the Powhatan chief’s daughter Pocahontas that he wrote about, as well as the fantastical version of that story that was told in history- to create something entirely new. Something new that respects Powhatan culture, honors Pocahontas’ legacy, and delivers a message of tolerance. 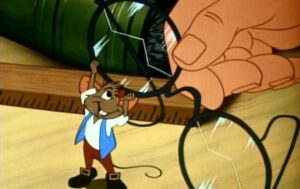 Sterling Holloway as Amos the Mouse.

Known For: Being the friend and companion of founding father Benjamin Franklin, and helping inspire some of his early ideas and inventions.

In this charming 1953 Disney animated short Disney takes on the life and legacy of American founding father, inventor, and philosopher Benjamin Franklin. The story was based off of a children’s book by author Robert Lawson, telling the story of a small mouse named Amos who lives in Christ Church in Philadelphia with his family and encounters ol’ Ben.  Amos subsequently assists Benjamin in some of his greater accomplishments. But more impressively he is voiced by the great Sterling Holloway voice of Alice in Wonderland‘s Chesire Cat, The Jungle Book‘s Kaa, Winnie the Pooh in his Many Adventures, and more. 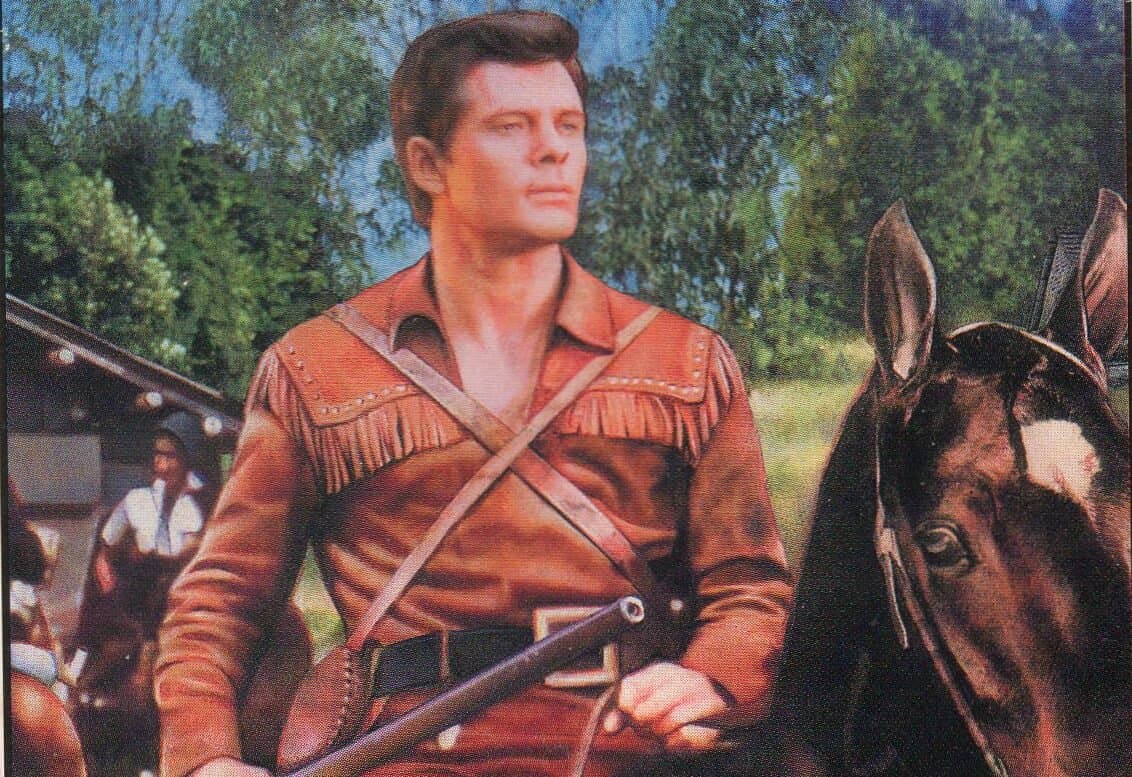 Known For: Exploration and settlement of what is now Kentucky, which was then beyond the western borders of the Thirteen Colonies.

Daniel Boone is one of the all-time greatest American folk heroes, and as such he was naturally immortalized by Disney in a famous series that aired in the 1960s. Even if you have never seen this TV series, it is entirely possible that at some point you have heard the lyrics to its famous theme song, 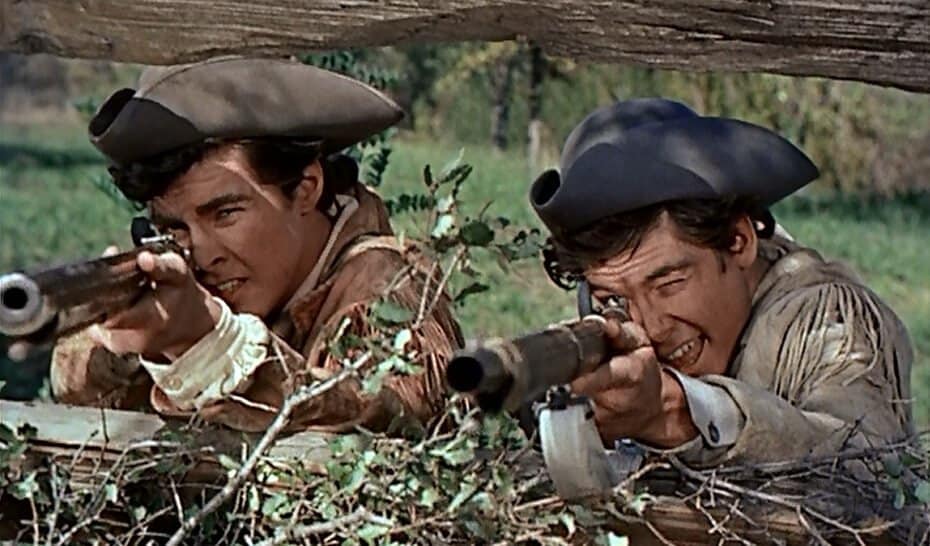 Based On: Johnny Tremain, by Esther Forbes, 1943

Known For: Participating in the Boston Revolt against the British.

Disney’s adaptation of the life and times of Johnny Tremain is a firsthand account of how young men, and subsequently the young people at large in modern times, can directly participate in momentous moments of history. Including marching for the ideals of freedom that America has always stood for. Notably, the opening song of this Disney classic has the famous Sons of Liberty headed for The Liberty Tree and posting the notice of the incoming revolution, both noted beloved features of the Magic Kingdom’s Liberty Square. 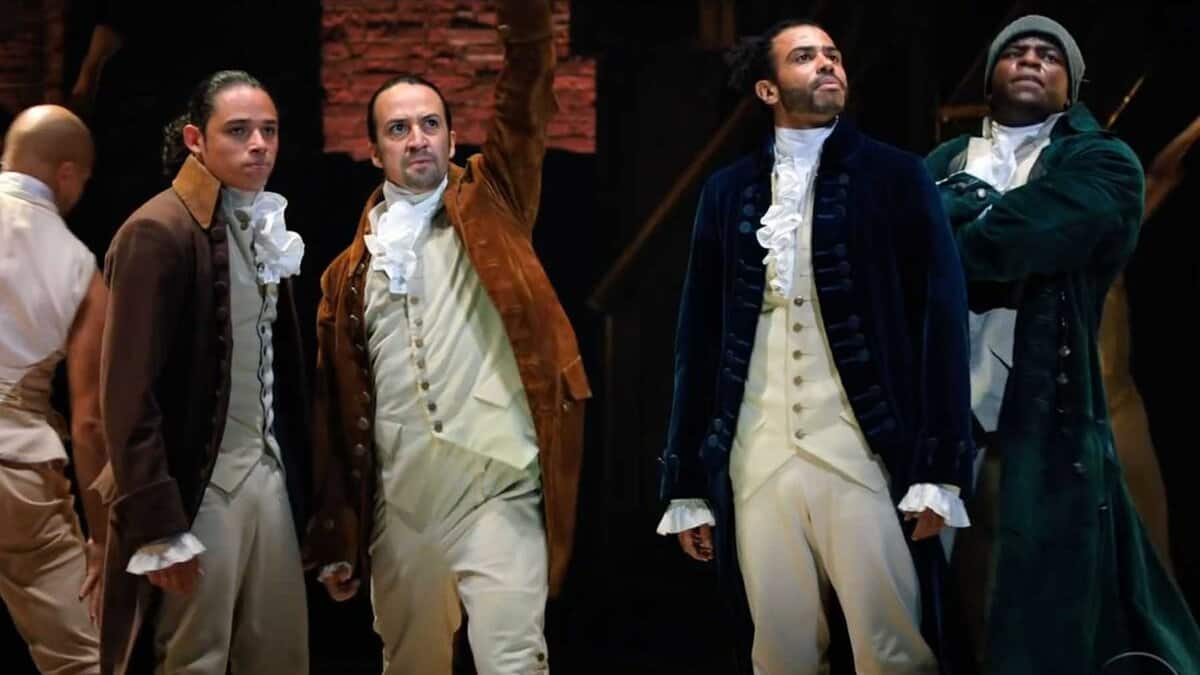 The original Broadway Cast of Hamilton.

Based On: Alexander Hamilton, by Ron Chernow, 2004

Setting: The Years of the American Revolution, and on to Hamilton’s Service as Secretary of the Treasury, 1789–1795

Known For: Not throwing away his shot, being George Washington’s right-hand man, serving as secretary of the treasury in the first cabinet of the United States.

Hamilton, the hit Broadway musical brought to the masses on Disney+ streaming service, tells the story of Alexander Hamilton. But what it really serves as is the “great unfinished symphony” that is America, a remembrance of those who have bled and died to protect it, and a contemplative piece on the role of life and legacy. 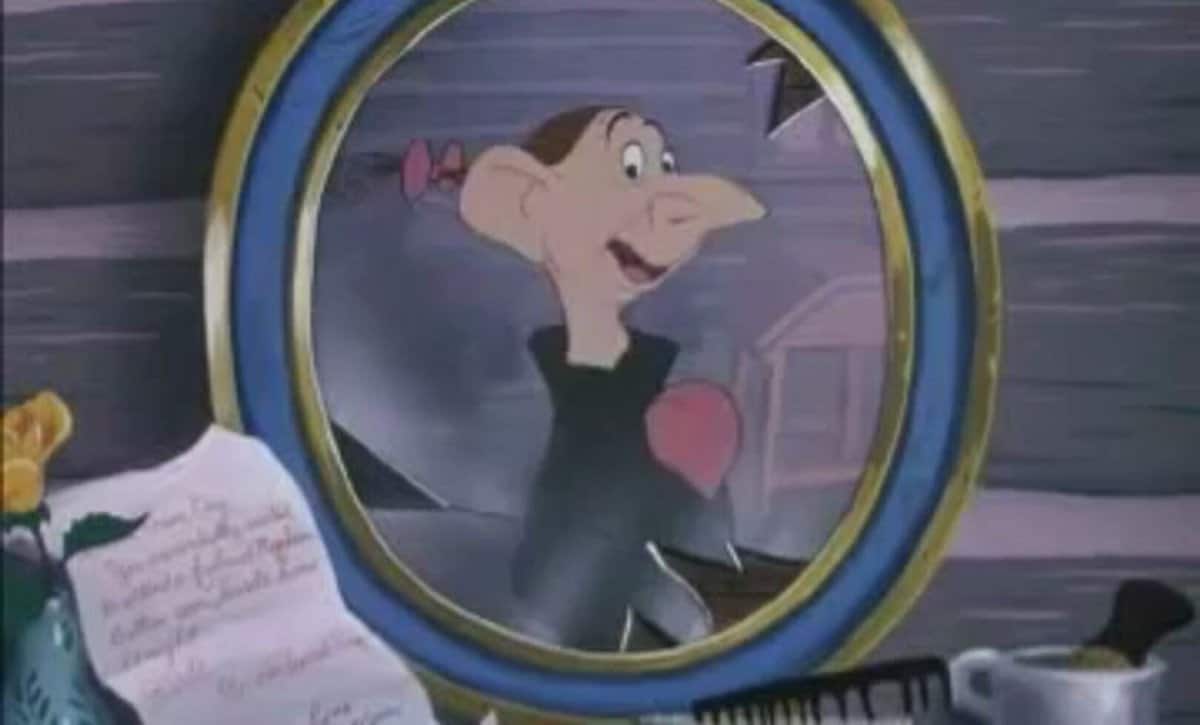 Ichabod Crane in The Legend of Sleepy Hallow.

As Seen In: Disney’s The Adventures of Ichabod and Mr. Toad, 1949

Based On: The Legend of Sleepy Hollow, by Washington Irving, 1820

Setting: Just after the American Revolution, 1790

Known For: Being the schoolmaster in the small town of Sleepy Hollow, New York and mysteriously disappearing after encountering the legendary Headless Horseman.

Ichabod Crane may not be a real-life American hero, but he is a pivotal character in early American literature. A major part of the development of America was not just its political foundation during the revolution, but the building of its own culture. The emergence of legends and folklore was a great part of the American story. Ichabod Crane is part of that story, brought to the screen to the masses with comedy and liveliness by Disney’s animators. 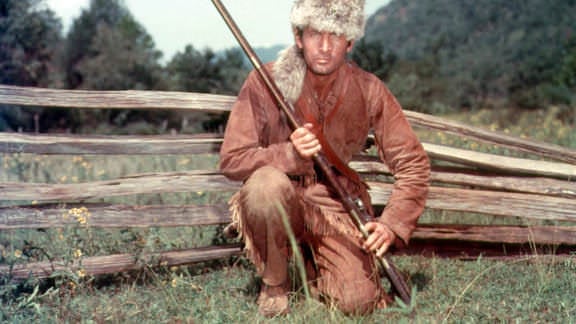 As Seen In: Disney’s Davy Crockett: King of the Wild Frontier, 1955

Known For: Fighting on the wild frontier, winning a seat in the United States House of Representatives, fighting and dying at the Battle of the Alamo.

Davy Crockett was a real figure in America’s history whose acts of heroism and contributions to American history seem so grandiose that they have to be fictional but were in fact not. He is a fine example of classic masculinity as well as the pioneer spirit emblematic of Westward expansion.

Known For: Going Westward with nothing but his bible, a pot, and some apple seeds, spreading the word of God as well as apple orchards as he went.

Johnny Appleseed, the American folk hero whose real life was quite extraordinary in its own right, has achieved the status of legend due to his unique appearance and reliance on apples for sustenance as well as a bartering method as he made his way West. In Disney’s account of his life, he is sent on his mission to spread the gospel as well as apple trees across the vast lands of America by an angel just after Johnny sings of the Lord’s many blessings.

John Henry (voiced by Geoffrey Jones) and his hammer.

Based On: The Ballad of John Henry and His Hammer

Known For: Being a symbol of black American industriousness and freedom, and out racing a steam engine before dying with his hammer in his hand.

John Henry, the mighty steel-driving man who is a black American folk hero as well as a representative of American industrious in the face of vast technological revolution. His story says that he knew one day he would die with his hammer in his hand, and when he defeated a mighty steam engine in a feat of speed driving railroad spikes into place, he did in fact lay down his hammer and die. Becoming a kind of martyr as well as a metaphor for the undying and irreplaceable spirit of American workers. 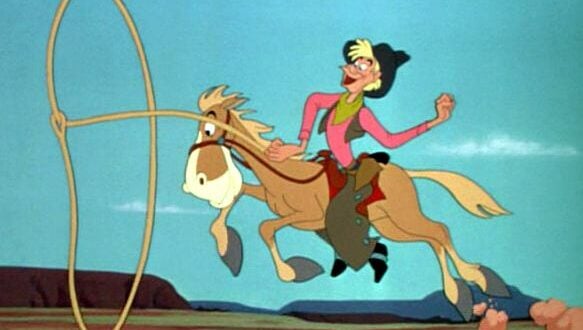 Pecos Bill and his sidekick Widowmaker.

Based On: The Legend of the Cowboy Pecos Bill

Known For: Being the most wild cowboy in all the West.

“Pecos Bill was the best, the best in the West.” or so his signature song states. A symbol for the wild tales told by cowboys at the height of the chaotic wild West. When there were tales so tall that a feat like lassoing a twister did not seem entirely ridiculous. Perfectly captured by Disney in all his mad-cap glory. 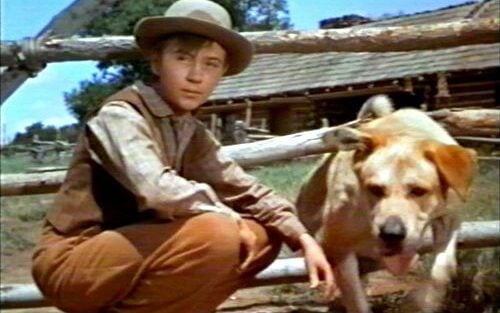 Known For: Being the best friend of young pioneer boy Travis, saving his family from a rabid wolf at the cost of his own life.

A dog that needs no introduction, and if his name is mentioned in mixed company to this day it is likely to elicit tears from grown adults. 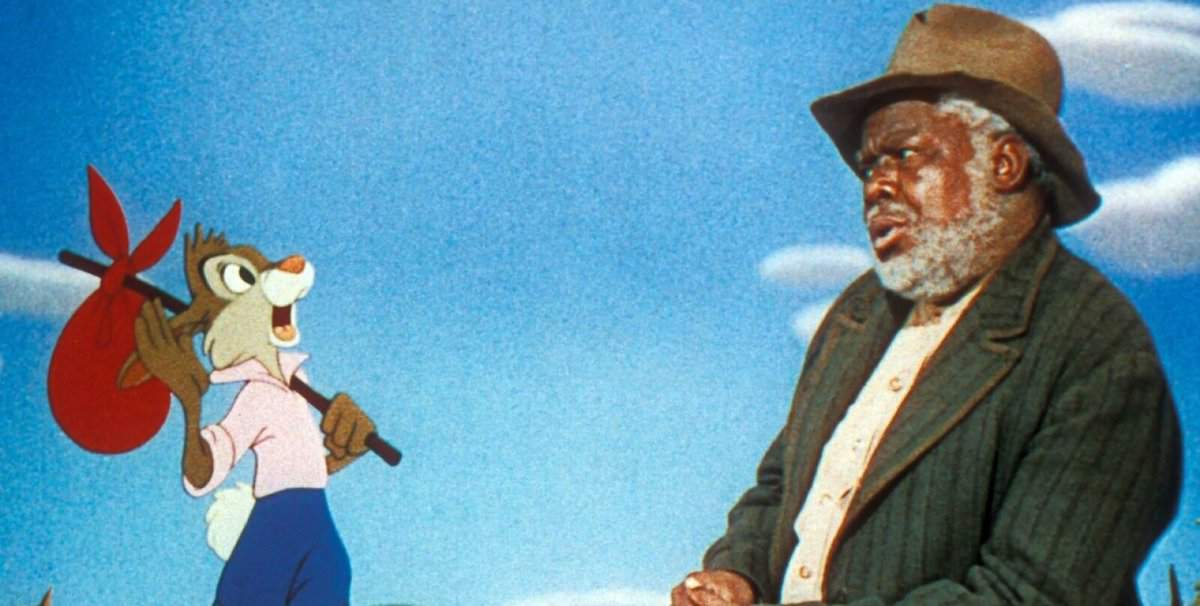 Known For: Telling stories to children to teach them lessons about life through the misadventures of Br’er Rabbit.

A misunderstood vital part of black American history and culture that was created to share the stories of real black Americans in the post-slavery south. 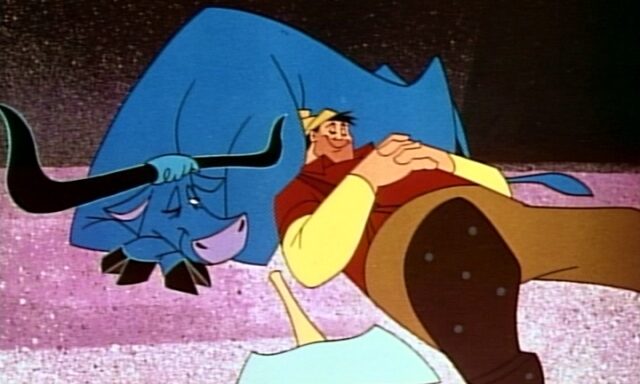 Based On: The Legend of Paul Bunyan

Known For: His giant stature, double-sided ax used to chop down trees in his bath, and large blue ox named Babe.

Paul Bunyan, the legendary giant ax man who served as a lumberjack accompanied by a giant pulling ox for lumber, which was naturally bright blue, and named Babe. Of course. It almost seems like a creative concept cartoonist sat down to create as a mascot for the American lumber industry, but it is in fact a bonafide American folk hero. 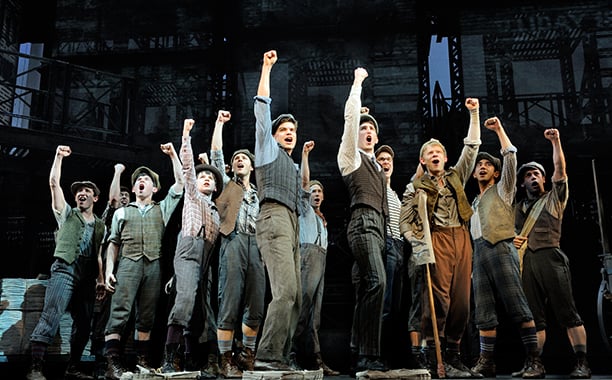 The Original Broadway Cast of Newsies.

Based On: The real-life Newsboys Strike of 1899

Known For: Leading his group of ragtag newsboys to unionize in protest for fair wages against news giants in Manhattan.

A real hero of early workers’ unions has been immortalized in both a Disney film and a hit Broadway show. Though it is strange to think in the same period when newsboys were tending to the bustling streets of New York City on behalf of News magnates in New York sky-rises in the same era of American history as cowboys and sharecroppers. 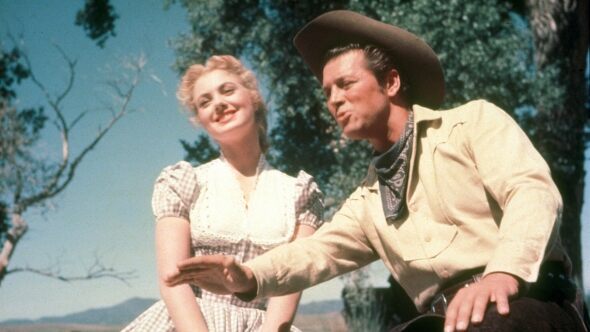 As Seen In: Rodger and Hammerstein’s Oklahoma, 1955

Known For: Being the charming cowboy who is known for teasing the girl he is sweet on, Ms. Laurey Williams. He invites her for a ride in the surrey with the fringe on top of the box social but thinking he is teasing she turns him down. He eventually saves her from the advances of the loathsome Jud Fry.

A fictional cowboy that represents the transitional time in U.S. history when the United States territories were transitioning to their official statehood, Curly is a classic hero of musical theater. Through the course of the Rogers & Hammerstein classic, available for streaming on Disney+, Curly’s love for Ms. Laurey Williams leads him to go from a traveling cowman to a farmer with a wife in Oklahoma. Based On: Tuck Everlasting, by Natalie Babbitt, 1975

Known For: Drinking from a spring along with his family and accidentally being granted immortality and invulnerability.

An adaptation of a 1975 novel that asks questions about the meaning of life, the fragile nature of our humanity, the meaning of eternity and love, and asks whether life is truly lived when it never ends. Jessie Tuck is the charming young son of the immortal Tuck family who falls in love with a young girl named Winnie that accidentally stumbles upon the source of his family’s invulnerability and must decide if she will choose to drink from the eternal waters. A 70’s novel that reads like a moralistic American folktale.