MCC Theater’s annual Miscast gala is a one-night-only musical spectacular featuring Broadway’s hottest stars performing songs from roles in which they would not traditionally be cast!

Funds raised from Miscast help MCC Theater produce some of the most talked-about new work Off-Broadway and support their Youth Company and in-school partnerships that serve New York City public high school students, as well as their literary development work with emerging playwrights.

Sierra Boggess as Britney Spears singing “Think of Me” from The Phantom of the Opera at Miscast 2013.

Sierra Boggess made her Broadway debut originating the role of Ariel in the Disney Broadway musical production of The Little Mermaid on August 26, 2010. Prior to Broadway, Boggess played female lead Christine Daaé in Andrew Lloyd Webber’s The Phantom of the Opera at The Venetian Las Vegas.

She reprised the role of Christine Daaé in the London debut of the Phantom sequel Love Never Dies, and once again played Daaé in The Phantom of the Opera 25th Anniversary Concert at the Royal Albert Hall in London with Love Never Dies co-star Ramin Karimloo as the Phantom. Her Miscast performance pays homage to her role as Christine, singing Christine’s debut at the Paris Opera House, “Think of Me” while mimicking the vocal styling of pop legend Britney Spears. 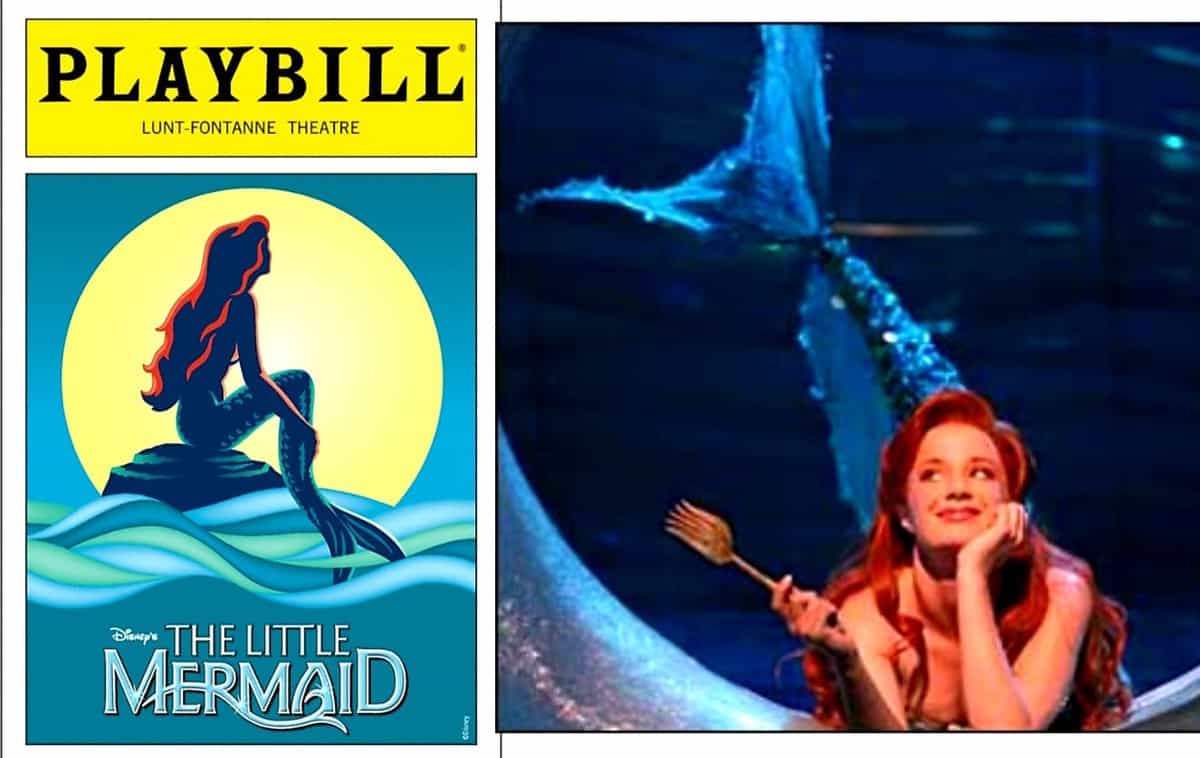 Jeremy Jordan and Jonathan Groff, “Let Me Be Your Star” 2013 Miscast.

Jonathan Groff is well known as the voice behind the lovable Kristoff in Walt Disney’s Frozen. He reprised the role in the short films Frozen Fever and Olaf’s Frozen Adventure, and the 2019 feature-length sequel Frozen 2. Frozen 2, at last, gave Kristoff his own song with the ballad “Lost in the Woods”.

He was cast in the original Broadway production of Hamilton as King George the Third, a role which he would return to for the Disney+production in 2020. But he is seen in this video upstaging Jeremy Jordon of NBC’s series Smash, while performing the opening song of the production within the show, Bombshell (a musical based on the life of blonde bombshell Marylin Monroe). 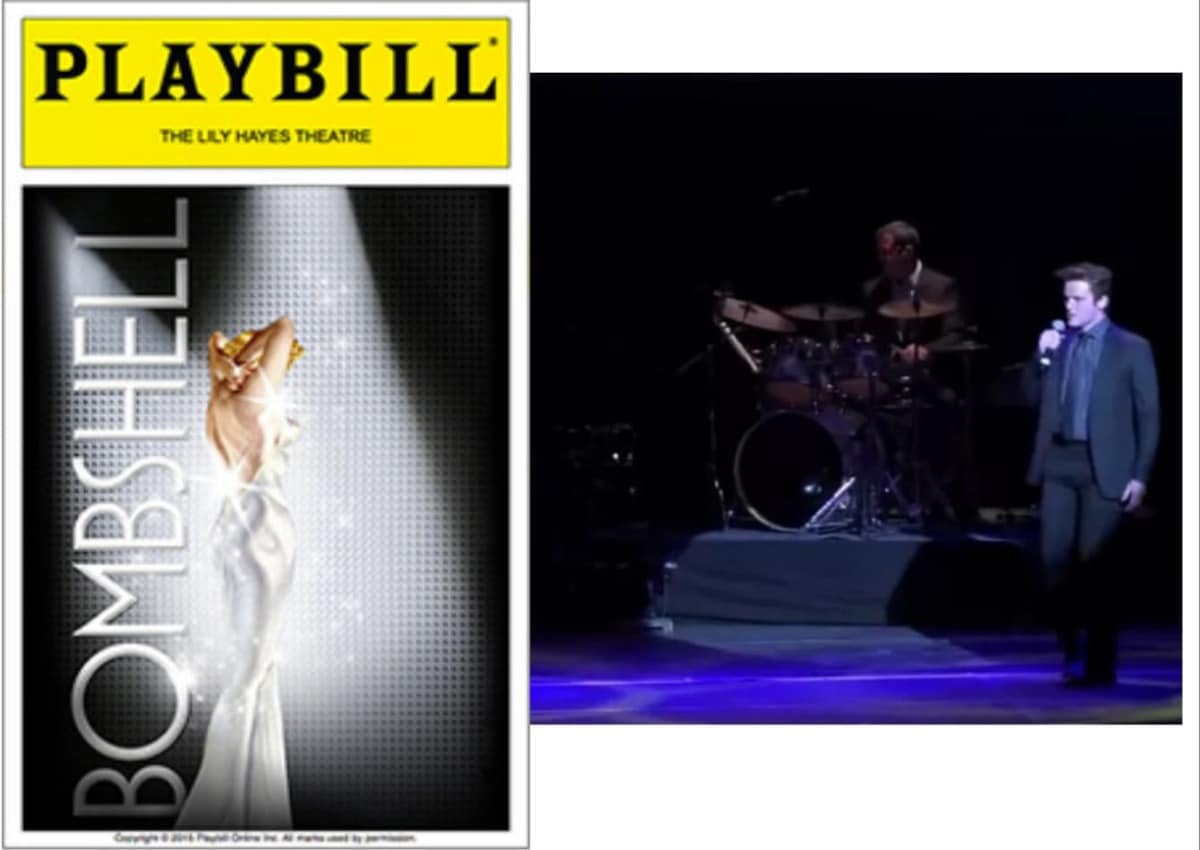 Jeremy Jordan takes on the role of Elsa in Frozen at Miscast 2014.

After performing with Jonathan Groff at the 2013 miscast as dueling Marylins, Jeremy Jordan got his revenge by covering Frozen’s signature song “Let it Go”. The Broadway production of Frozen would not premiere until 2018, with actor Jelani Alladin in the role of Kristoff. But Jeremy Jordan auditioned for the role of the animated hero first, beat out by Groff.

Before all of that, however, he was the lead Jack Kelly in Newsies. Newsies: The Musical is a Disney Broadway Production based on the 1992 film of the same name with music by Alan Menken, which in turn was inspired by the real-life Newsboys Strike of 1899 in New York City.  A professional recording of the production with Jordan as the lead was filmed in 2017 and is now available on Disney+. 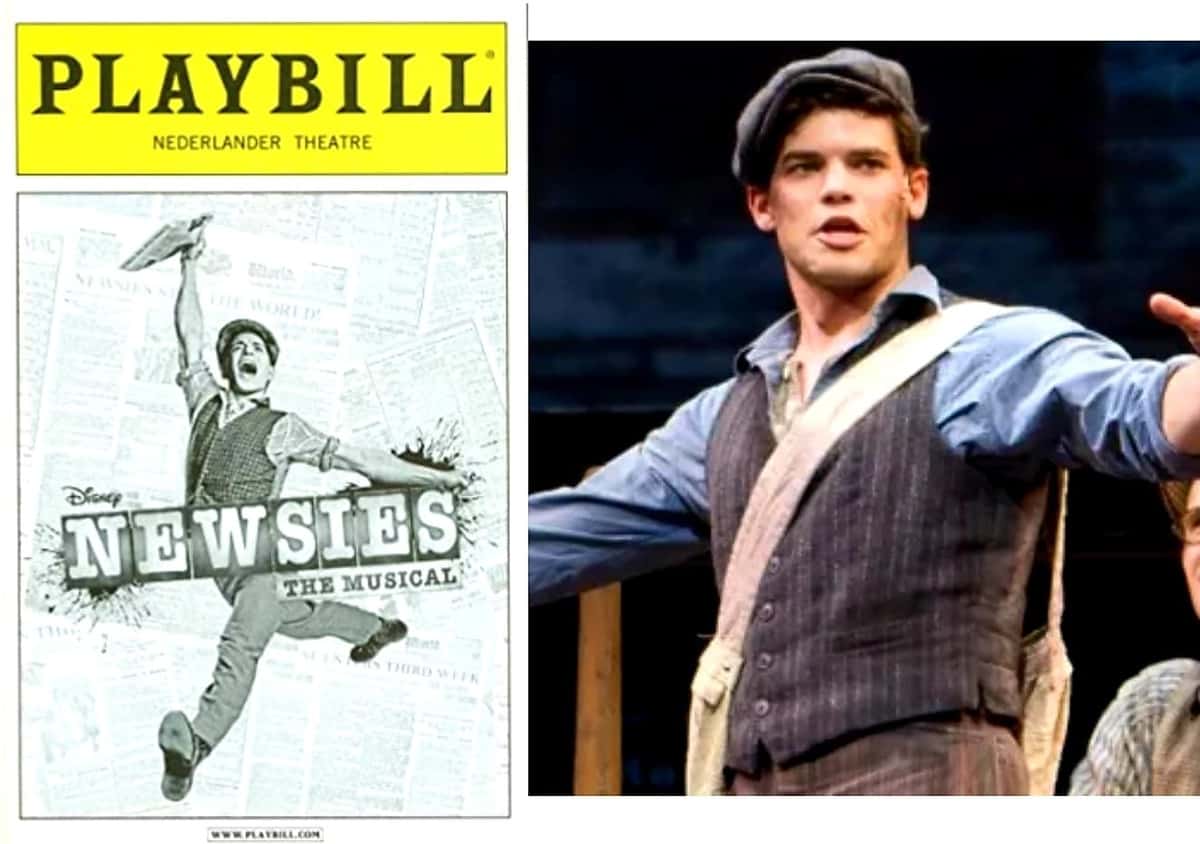 Lin-Manuel Miranda and Raúl Esparza take on the roles of Anita and Maria in West Side Story at Miscast 2014.

Lin-Manuel Miranda needs no introduction. Miranda was the creator and star of Broadway smash hits In The Heights and Hamilton, and writer of the music for Disney’s Moana and this year’s Encanto. Though he fell short of an EGOT win at the Academy Awards this year, he channels the energy of EGOT winner Rita Moreno in this portrayal of West Side Story‘s Anita. Anita angrily addresses sister Maria, played here by Raúl Esparza in “A Boy Like That”. 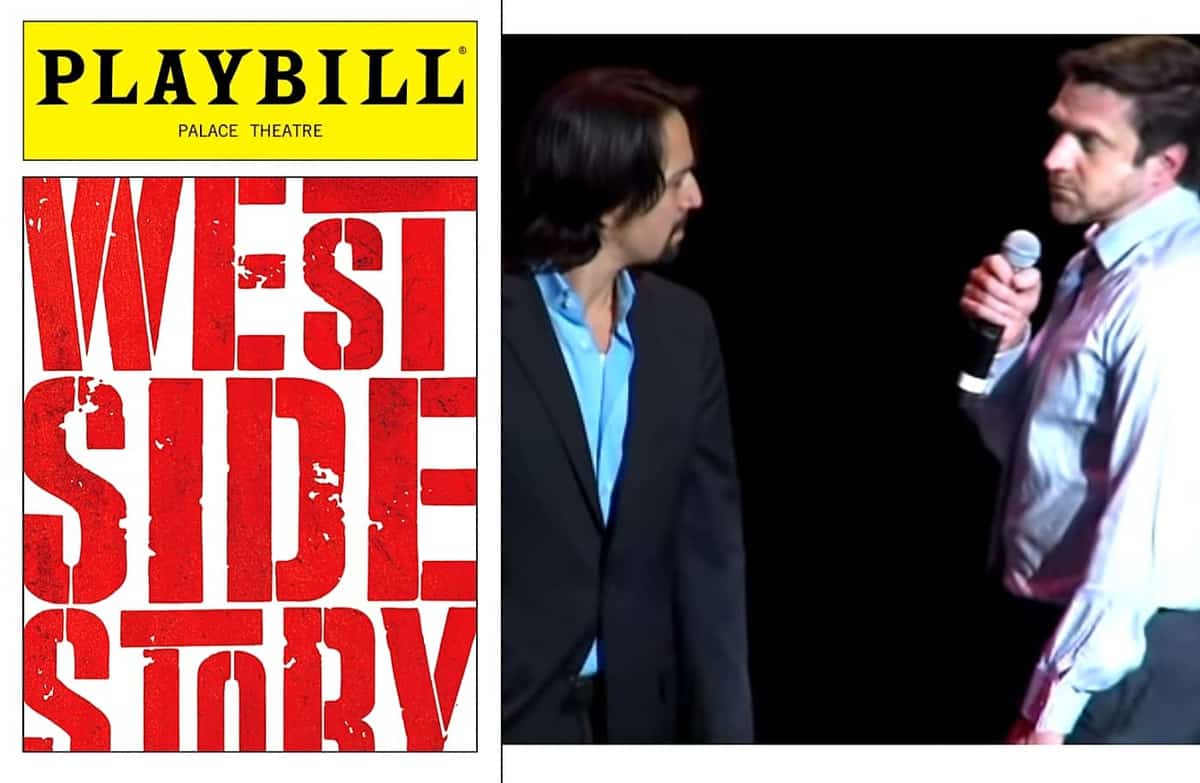 Leslie Odom Jr. is recognizable as the star Aaron Burr in Lin-Manuel Miranda’s Hamilton. However, a fellow singer in this performance (one of the Six Merry Murderesses of Cook County Jail from Chicago, Joshua Henry) has Hamilton ties as well.

Joshua Henry has been in every one of Lin-Manuel Miranda’s Broadway musicals, starting with 2008’s In the Heights, and including the role of Aaron Burr in the first U.S. tour of Hamilton. They are both joined once again by Newsies and Miscast alum Jeremy Jordan. 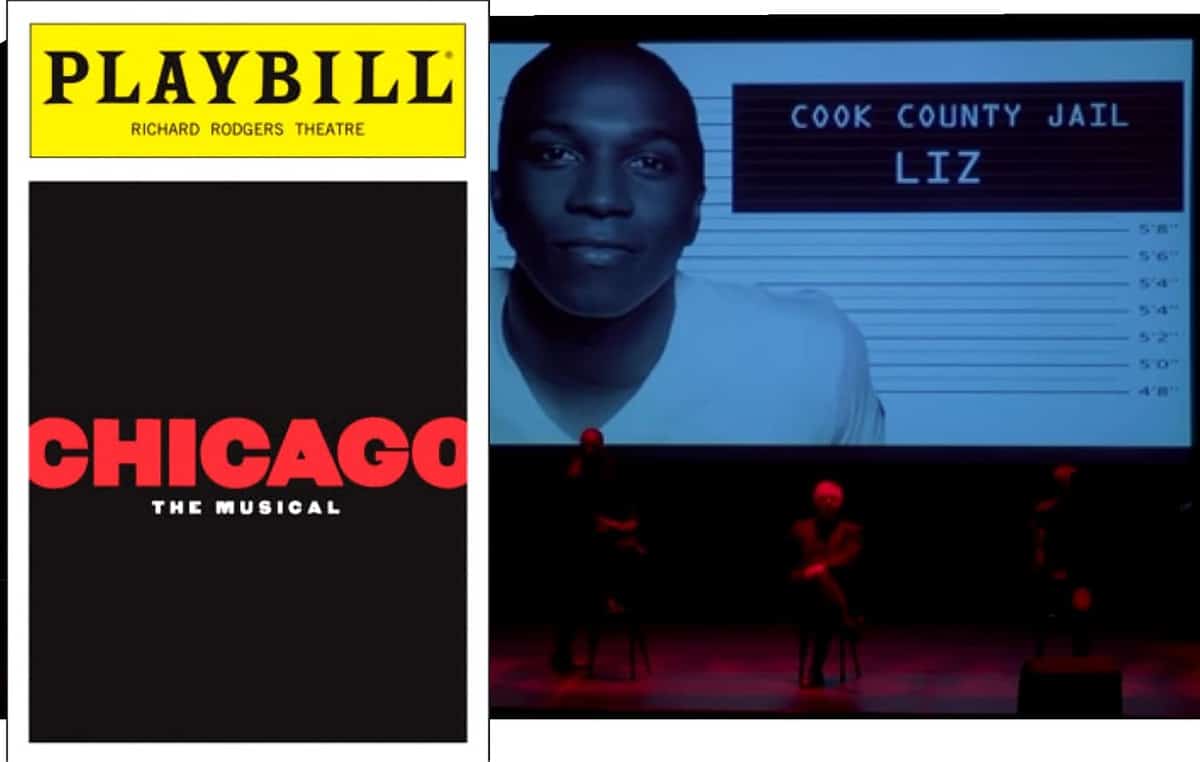 Aaron Tveit is Maureen and Gavin Creel is Joanne in “Take Me or Leave Me” from Rent. MCC Theater’s Miscast benefit filmed April 4, 2016.

When the London’s West End was mounting a production of Disney Broadway‘s Mary Poppins, New York-based actor Gavin Creel took over for original cast member Gavin Lee at London’s Prince Edward Theatre in the role of “Bert” the chimney sweep.

The role was of course first played on screen by the great Dick Van Dyke. This was Creel’s London stage debut. He is certainly not sporting a cockney accent and carefree attitude here, with the confrontational “Take Me or Leave Me” from Rent sung with fellow actor Aaron Tveit. 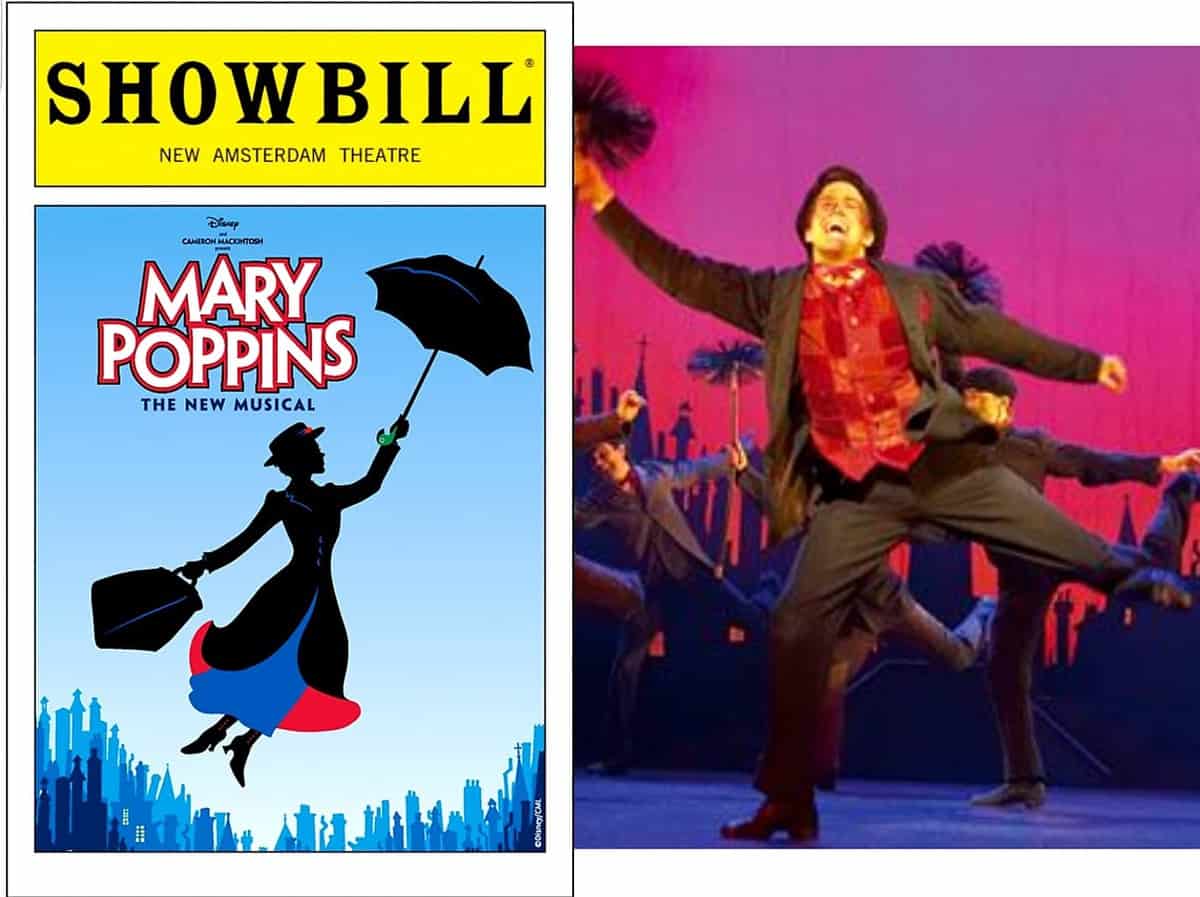 Tituss Burgess as The Witch of the Wood

Tituss Burgess (Unbreakable Kimmy Schmidt) pushes himself to the brink performing “Stay with Me” from Into the Woods during MCC Theater’s MisCast 2016 Gala.

Tituss Burgess originated the role of Sebastian in the original Broadway production of The Little Mermaid. However, he has gone on the record to say that the role he was truly meant to play was sea witch Ursula. Burgess channels that energy into “Stay With Me”, the emotional ballad of The Witch in Into The Woods. Though the original production of Stephen Sondheim’s Into The Woods debuted in 1987, Disney’s film adaptation premiered in 2014 and is available now on Disney+.

Burgess would star in the Netflix comedy Unbreakable Kimmy Schmidt as struggling actor Titus Andromedon, who like the real-life actor Burgess auditioned multiple times for Disney’s The Lion King on Broadway without being cast. 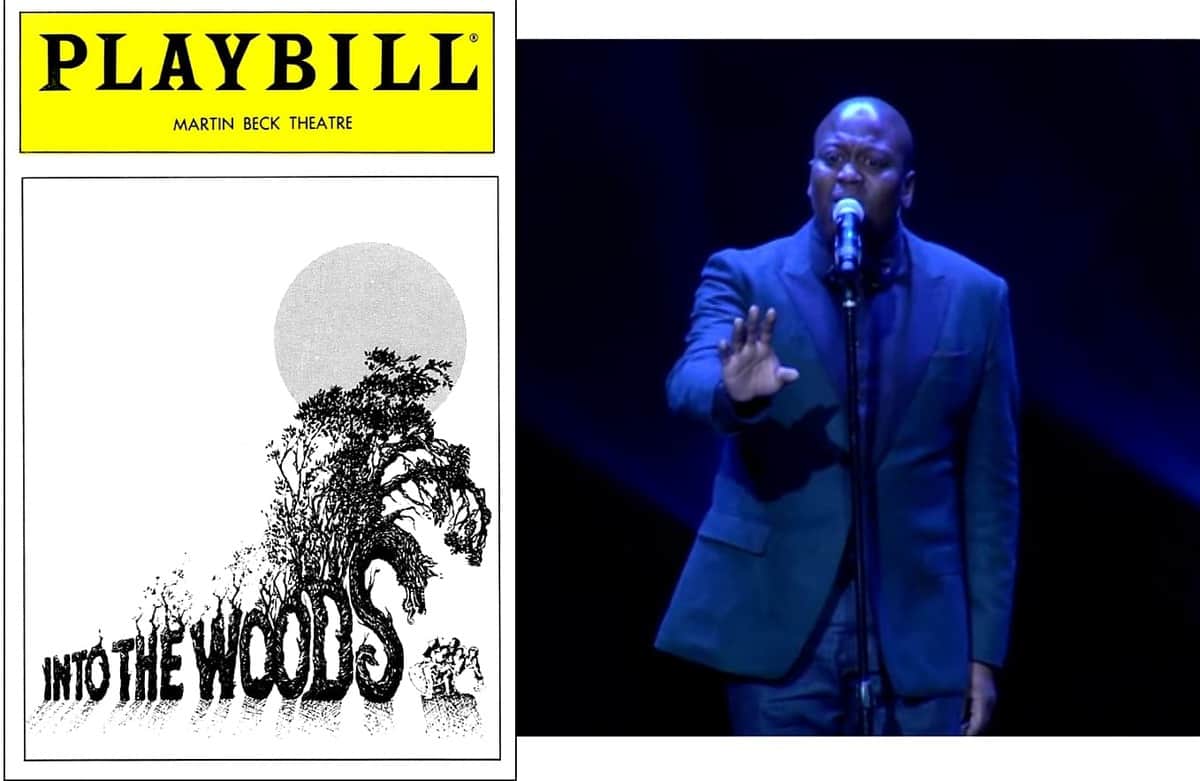 Broadway Boys Luca Padovan (School of Rock), Joshua Colley (Les Miserables) and Douglas Baldeo (Kinky Boots) are looking for a mind at work, work in their rendition of “The Schuyler Sisters” featuring Ana Villafañe (On Your Feet!) at MCC’s annual Miscast 2016 gala.

Though little sister Peggy played by Douglas Baldeo has yet to appear in a Disney Broadway production, all three young actors have immense star quality.

James Monroe Iglehart originated the role of the Genie in the Disney Broadway production of Aladdin, for which he won a Tony award for his performance. He also played the dual role of Marquis de Lafayette and Thomas Jefferson in Hamilton.

Though he has performed the Genie’s signature song “Friend Like Me” many times, for the Miscast fundraiser he opted to perform the Hamilton hit “Satisfied” sung by heroine Angelica Schuyler. 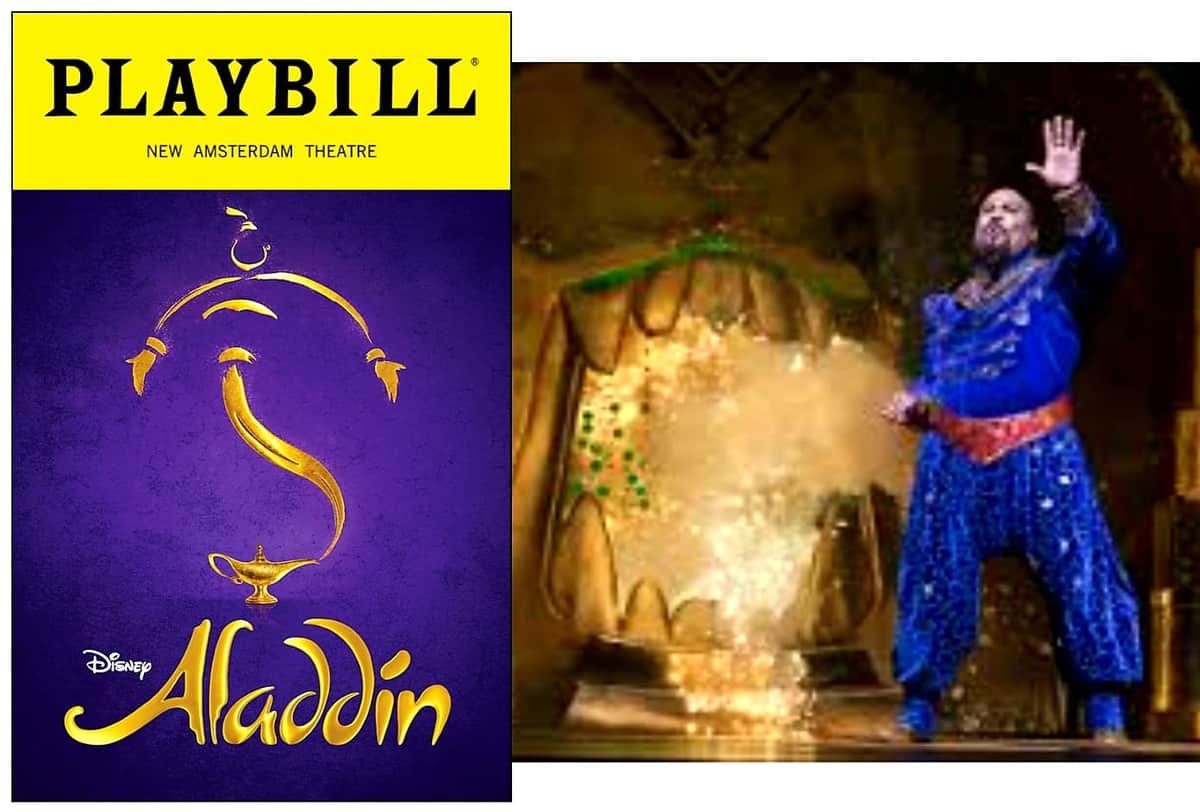 Auli’i Cravalho is best known as the Disney Princess Moana, from the film of the same name. She is aware of that and opens up her performance jokingly by singing the first few notes of, “How Far I’ll Go” before saying “just kidding.”

This was the same year that she formed part of the ensemble cast of NBC’s Rise. The show chronicled a working-class high school drama department and students under a passionate teacher and family man whose dedication to the program galvanized the entire town. Her 2018 performance of “Who Knows” from West Side Story came four years before the 2021 remake and its subsequent release to Disney+. 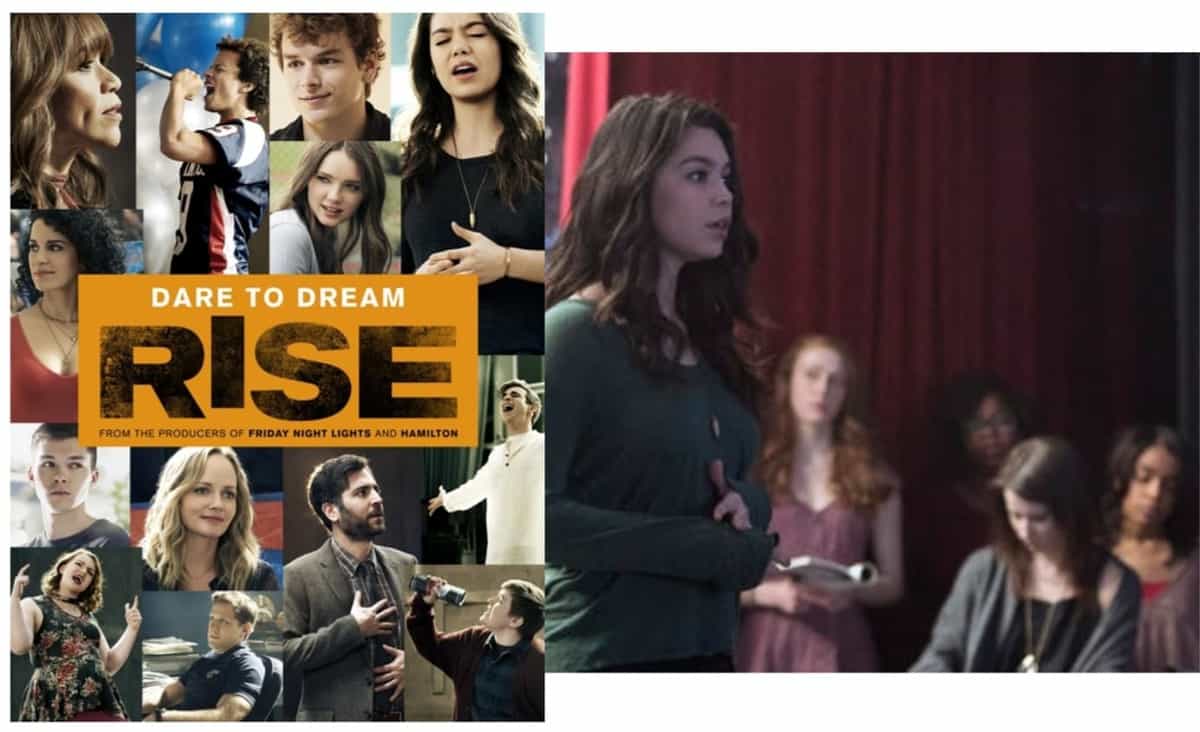