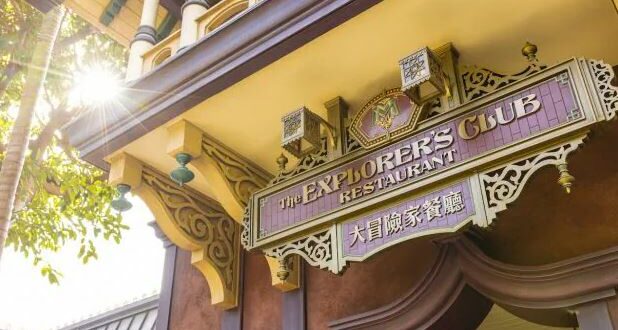 The Walt Disney Company has been making an effort to include more storylines from S.E.A. (the Society of Explorers and Adventurers) both in Disney parks around the world and in new products (like a new novel series coming out inspired by these stories in 2022). At the Walt Disney World Resort, we have also seen some subtle nods to S.E.A. finding their way into the reimagined scenes in the Jungle Book attraction in the Magic Kingdom. More recently, Hong Kong Disneyland has revamped one of the park’s restaurants to dive deeper into the world of S.E.A., and we are excited to share a first look with photos and an update via the Disney Parks Blog. The Explorer’s Club Restaurant at Hong Kong Disneyland is inspired by the world travels of Lord Henry Mystic (if you have ridden the Mystic Manor attraction at the park, you may recognize him as one of the ride’s main characters). The restaurant is now serving unique entrees with a variety of fresh ingredients from around the world inspired by Mystic’s travels with both a buffet and table service options.

Imagineers worked to renovate the space into a exhibition showcasing artifacts from Mystic’s travels, making the restaurant a truly unique dining experience for Guests. During the renovations, Imagineers worked alongside producer Den Den Tse and art director Kendall Elliot, to expand both the story of Lord Henry Mystic and S.E.A., as well as a general sense of cultural awareness for Guests visiting the restaurant and exploring his collection.

As far as the Explorer Club’s greater role in the S.E.A. within Disney parks around the world, the restaurant serves as a meeting place for S.E.A. members led by Mystic to meet and celebrate their adventures. Guests are involved in the story as they are invited to dine at the location and learn more about the cultures S.E.A. members have immersed themselves in during their travels. Some of the most unique works of art in the restaurant include murals that Mystic received as gifts from fellow S.E.A. members. The paintings were done by concept artists Sandra Liang and Dilara Polat who created beautiful images of locales visited by Mystic and other members of the S.E.A. including China, India, Russia, and Egypt.

The restaurant reopened to Guests on December 22, 2021, and Cast Members and families spending time in the park are thrilled to be back in the space and see the restaurant’s new, enhanced theming.