Imagineers Offer a Glimpse into Princess Staterooms Aboard the Disney Wish

We already knew that the Disney Wish was going to have Disney princess-inspired suites for its Guests, and we also knew from the teaser images and concept art of the suites that they were going to be stunning. But now, the Disney Parks Blog has provided some further insight into how those Disney princess staterooms are coming into existence! The suite options on the Disney Wish will include the Royal Suite, the Concierge Suite, and the exclusive Wish Tower Suite. 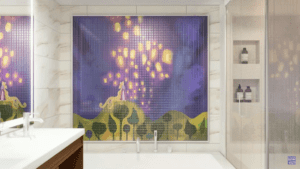 According to Imagineering Cast Member Claire Weiss, “it has been a dream come true sprinkling pixie dust all throughout the staterooms”. A stateroom should be a Guest’s “home at sea” that “is peaceful, calming, functional and infused with enchanting details that make it uniquely Disney”.

To begin, the Imagineers “spent years working with designers and artists to examine every detail; carefully considering how color, light and shapes interact to ensure the environment [created] is both restful and magical”. Apparently, “since the majority of the finished pieces for the Disney Wish were fabricated offsite”, the Imagineers also “built hundreds of mockups prior to final construction in order to visualize” their overall plans.

Amazingly, the “1,254 staterooms” that come from those initial designs are actually “manufactured on an assembly line, where each piece is carefully installed on a conveyor belt”! Apparently this “production line…includes everything from furniture and walls to artwork and lighting”. It’s hard to imagine the Disney princess suites emerging from a factory!

As usual, Walt Disney Imagineering has outdone itself with its latest undertaking (and here we thought that the Disney Dream, Disney Fantasy, Disney Wonder, and the Disney Magic were nice)! Are you planning to take a Disney cruise on the Disney Wish when it sets sail next June? And are you hoping for a deluxe oceanview stateroom (or perhaps a deluxe family oceanview stateroom) during your vacation?