If you’ve been waiting to watch the brand-new Disney+ food show Foodtastic, then today is the day! The show has officially premiered on Disney+, and eleven episodes are available for viewing! This show is hosted by Keke Palmer, and it features well-seasoned bakers and highly skilled artists as they try to recreate iconic Disney characters or Disney scenes in the form of extravagant masterpieces. The show’s judges are Amirah Kassem and Benny Rivera.

While competitive cooking shows are all the rage these days (due in part to the success of The Great British Baking Show), this show is presenting a unique Disney take on the genre. Keke Palmer has a long history with Disney, so her role as the show’s host seems logical, and there’s a slightly corny theme in the show as Keke’s ‘character’ finds herself in a Disney or Marvel storyline. For example, in the first episode, Keke has been miniaturized and needs Ant-Man for battle–so understandably Ant-Man is the character that the show’s contestants need to make! This approach to the show is indeed corny, but it fits a show that’s meant to be light Disney fun. 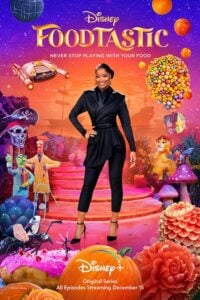 Since large-scale food sculptures and extravagant scene work typically requires more than one person, there are teams of three competing against one another on Foodtastic. The teams on the show have named themselves–and understandably given their teams Disney names–and the mood on the show is lighthearted despite the challenge taking place! Viewers can learn lots of interesting techniques from the show; even if you yourself aren’t planning on creating edible sculptures (such as a giant anthill), you might still want to know how food art experts can build one with ramen noodles. And that’s something you’ll learn on this show!

Each episode has its own Disney theme ranging from classic Disney stories like Toy Story (1995) and The Lion King (1994) to more modern Marvel ones like Ant-Man and the Wasp (2018), so there should be something to interest everyone in your family. Are you interested in watching this Disney show? And have you already made the recipe for holiday cake pops (shown below) that was shared by host Keke Palmer on the Disney Parks Blog?