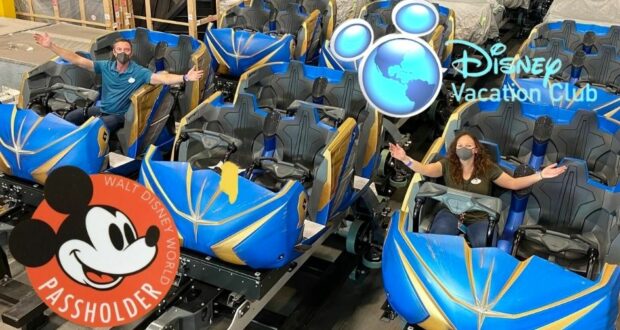 Now that we know when the newest EPCOT attraction is coming to Walt Disney World Resort, Disney fans will want to see the new thrill ride as soon as possible — and if you’re a Disney Annual Passholder or Disney Vacation Club member, then you’re going to get a front-row seat! Disney has announced that the new Guardians of the Galaxy: Cosmic Rewind roller coaster is going to be available within Walt Disney World Resort for a preview to Annual Passholders and Disney Vacation Club members.

Emails have been sent to Disney’s Annual Passholders and Disney Vacation Club members to give them a heads-up about the Passholder previews for Guardians of the Galaxy: Cosmic Rewind. The email says that you can “be among the first in the galaxy to ride in this new coaster”!

The email also says to keep your eye out for a registration email in your inbox. Being one of the first people to ride any Disney attraction or Disney coaster is always a treat, and with the high anticipation for this new Disney coaster (based on the popular Marvel Studios movies in the Guardians of the Galaxy franchise) at Walt Disney World Resort, the honor and the excitement will be particularly special!

Disney World has sent out emails to annual passholders and Disney Vacation Club members letting them know there will be passholder previews for Guardians of the Galaxy: Cosmic Rewind. Registration emails will go out soon. pic.twitter.com/Z4QbJcjjxw

Since the Guardians of the Galaxy: Cosmic Rewind opening date was just announced on the Disney Parks Blog, we know a little more about the upcoming Marvel ride. We know from the Disney Parks Blog that it will involve the people of Xandar, most likely coming to EPCOT’s World of Xandar Pavilion on an intergalactic journey, and it will also involve the Nova Corps, known as “Xandar’s peacekeeping team”.

You can see the teaser trailer for the coaster below! Once again, it looks like Walt Disney Imagineering has outdone itself — and it is always exciting to see what the average Disney Imagineer can conjure up! We’re particularly excited to see the Disney Imagineer influence within the Galaxarium!

Are you a Disney fan who has an Annual Pass for the Disney Parks in Walt Disney World Resort and/or calls yourself a proud member of the Disney Vacation Club? If you fit those criteria, and you’re also a big fan of the Marvel Cinematic Universe, then you’ll want to be first in line for this new Disney ride in EPCOT! Keep an eye out for Peter Quill and Gamora!