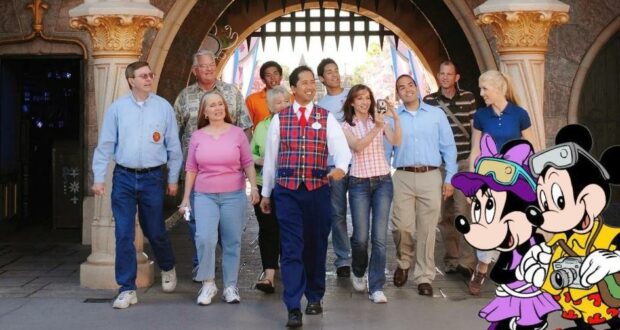 Disneyland Resort announced that, after almost three years, some of its guided tours are finally available again.

The guided tours are just the latest experience to make its triumphant return amid Disneyland Resort’s extended crawl back to normalcy after the pandemic. They also follow the announcement of the return of Disneyland Park’s daytime parade, Magic Happens, as well as full-scale holiday celebrations at the original Theme Park and its neighbor Disney California Adventure Park.

“Holiday Time at the Disneyland Resort” is described as the following:

Discover the Merriest Place on Earth

Gather ‘round for a festive tour of both parks for a close-up look at our dazzling seasonal transformation.

Your guide for this 2.5-hour walking tour will share favorite Disneyland holiday traditions from around the world. You’ll also enjoy reserved viewing for A Christmas Fantasy Parade, delicious holiday treats, a wonderful wintry ride on “it’s a small world” Holiday and more. The “Walk in Walt Disney’s Footsteps” Guided Tour is described as the following:

Walt Disney, the Man Behind the Magic

Explore Walt’s life as you experience classic Disneyland attractions before ending with a delicious meal.

Prepare yourself for a magical journey as you learn how Walt Disney wove his personal history into the development of Disneyland Park.

Listen to stories about what inspired him, the challenges he faced and the excitement he encountered while designing what is now one of the most famous vacation destinations in the world.

Along the way, you will even see a part of the theme park unavailable to most Guests. It’s a perfect opportunity to gain a unique perspective of each of our Fantasy realms!

On July 17, 1955, Walt Disney’s dream for a happy place for the young and the young-at-heart was realized when Disneyland Park opened. And to this day, it remains the only Disney theme park in the world that Walt himself personally experienced!

Step back in time during the Walk in Walt’s Disneyland Footsteps Guided Tour and experience attractions significant to Walt’s past, in addition to those that connect with Walt’s very personal vision. It should be noted that valid Theme Park admission and correlating Theme Park Reservations are required in order to experience either of these extra-cost activities.