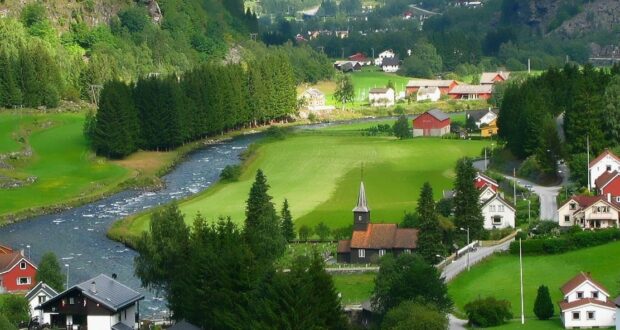 Did you know that many of the iconic places portrayed in Disney film, along with a number of notable attributes within Disney Parks, were actually inspired by real-life locations from all around the world? What’s even better is that you can visit many of these destinations personally, via some of the great tour packages offered through Adventures By Disney. From destinations across the sea to those within the Americas, here are six sensational adventures you can go on to experience Disney’s most marvelous inspirations.

We see this famed Bavarian castle featured in the flyby for Soarin’ Around the World, and on closer inspection, you may notice some similarities to another iconic castle of Disney fame. Which one, you ask? Apparently, both Sleeping Beauty Castle, as well as Cinderella Castle, drew inspiration from this real-life chateau, which the Disney family was even known to have visited.

And you too can visit the castle as one of the many stops included within the Munich City Walking Tour, offered through Adventures By Disney. As a 9-day/8-night excursion, other featured highlights on this trip include visits to the Dachau Memorial, exploring Nuremberg and Rothenberg, stopping in Berlin, and undertaking a whole host of activities and endeavors that come with each destination.

Related: Use Disney Paper Parks to Create Your Own Cinderella Castle Shadow Box

A visit to Bergen, Norway is just about the closest you can get to actually transcending into the fictional kingdom of Arendelle from Disney’s Frozen. With all its fjords, quaint wooden houses, traditional architecture, fish markets, and let’s not forget those scenic vistas, it’s a welcome home for any fan of the film franchise.

But the best part of all is that it’s actually easier than you may think to visit such a location along with other places throughout Norway that pointed to various plot inspirations for the movies. This includes stopping off at Flam, Geiranger, and Oslo along the way. Just book the Adventures By Disney 8-day/7-night all-inclusive Norway Tour package and you’re all set for this most Frozen-festive of follies.

Walt Disney loved traveling, and Switzerland was among one of his most favored countries to visit each year. So is it any wonder that Switzerland’s captivating Matterhorn Mountain was the inspiration behind one of Disneyland’s top attractions—Matterhorn Bobsleds? What many fans do not know, however, is that in 1959—the same year Matterhorn Bobsleds opened—Disney also released the film Third Man on the Mountain, which took place in Switzerland and centered heavily around the Matterhorn.

It’s also worth noting that the Matterhorn gets a flyby inclusion within Disney’s Soarin’ attraction as well. But have you ever wanted to see the Matterhorn in person or visit other iconic spots Walt Disney frequented on his voyages to Switzerland? Many such sights are highlighted within the Adventures By Disney Italy & Switzerland Tour, which focuses on the Alpine side of Northern Italy, venturing through Lake Como, and offering breath-taking views of the Matterhorn in person. This package is an 8-day/ 7-night offering and includes numerous other activities and highlights along the way.

Related: Everything Disney World Desperately Needs to Take From Disneyland

A true world wonder, this sensational spot, steeped high in the Andes Mountains, served as the inspiration behind the animated, albeit fictional film The Emperor’s New Groove from 2000. What’s even more interesting is the fact that Disney animators even visited the location in person while making the film!

And you can visit too when you opt for the Adventures By Disney Machu Picchu Tour. Offered as a 9-day/8-night package, this all-inclusive tour takes you on an extensive journey throughout the ruins of Machu Picchu along with highlighted visits to other surrounding ventures, including the Sacred Valley and the nearby city of Cusco. The tour also includes visiting Lima, the nation’s capital.

Disney fans in North America can find adventure closer to home by exploring the scenic, canyon-rock terrain throughout much of the southwestern United States. While the primary inspiration behind the famed Big Thunder Mountain rollercoaster attraction in Disneyland, California is taken from Bryce Canyon National Park in Utah, the version at Walt Disney World Resort, along with those at Disneyland Paris and Tokyo, are modeled after the landscape of Monument Valley.

It’s also worth noting that the latter is too featured as a clip in Soarin’ Around the World. And while flying by via the famed attraction offers an excellent aerial immersion, you can experience the rugged wonders of Monument Park for yourself with Adventures By Disney’s Grand Canyon package. In highlighting the scenic best of Arizona and Utah’s most iconic wonders, you get to travel to such iconic marvels as the Grand Canyon, Sedona, Arches National Park, and so many other uncontested sights over an 8-day/7-night excursion.

This is perhaps the most iconic, influential destination on our list of prominent Disney inspirations. It is, after all, the primary model that Walt Disney himself referred back to when conceptualizing his plans for a theme park based in Anaheim, California. That’s right, this second-oldest operating amusement park, which opened in 1843 in Denmark, was most influential in making Disneyland Park what it is! By extension, this includes all other Disney Parks to follow, including Walt Disney World Resort.

And if you love Disney Parks, and you’re looking for more ultimate Disney fan experiences to take, then perhaps you’d like to visit this epitome attraction that started it all. And you can with the Adventures By Disney Copenhagen Tour. Available as a 4-day/3-night package, the stop at Tivoli Gardens isn’t the only dominating destination on the itinerary, nor is it the only magically infused Disney-designated marker along the way. You are in the domain of Hans Christian Andersen, after all, and that means a couple of cool Frozen touches and Little Mermaid magic thrown in as well, including a stop at the one and only Little Mermaid Statue. You’ll also foster your fairytale frenzy with visits to Kronborg Castle as well!

In addition to the tour packages we’ve highlighted here, there are plenty of other adventures awaiting you, including options for private touring or opting for other packages not directly connected to any internal Disney influences. And while the emerging uncertainties related to the ongoing public health situation are still changing, it’s always best to keep up-to-date with all the current offerings and protocols in place by visiting the Adventures By Disney website. Whatever excursion you choose to embark on next, when you go on an adventure with Adventures By Disney every destination gets customized by that classic touch of Disney magic.