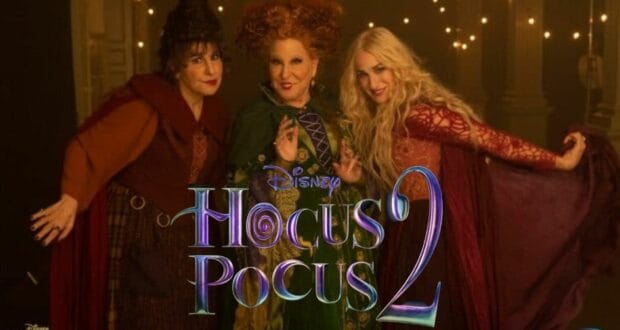 The sequel to the 1993 cult-favorite Halloween movie Hocus Pocus (which starred Bette Midler as Winifred Sanderson, Kathy Najimy as Mary Sanderson, and Sarah Jessica Parker as Sarah Sanderson) is finally in production, and post-production reshoots are already underway!

Hocus Pocus 2 is taking a page out of the Enchanted sequel’s book and filming reshoots (i.e. additional footage meant to add more detail, fix errors, adjust the movie’s style for the director’s vision, improve the movie’s quality after ‘audience testing’, et cetera) within New York City — even though the movie is set in Salem, just like the first movie about the Sanderson sisters.

The Instagram account “Hocus Pocus Guide” shared some glimpses of the set on a street in New York City, saying that “a lot of work went into turning this street in New York into a Halloweeny street in Salem for only 1 night of filming”. Check out the fake Salem signs (which are replicas of real Salem businesses’ signs) in the post shown below!

Reshoots seem to have made some fans of the original film nervous, but the Hocus Pocus Guide reminded its followers that “mostly every film goes through reshoots – we just don’t normally know about them, but because there’s been so much spotlight on the making of “Hocus Pocus 2” we’ve been more aware of it. It’s not a bad thing – it means the filmmakers are trying to make the best film possible.”

The new Hocus Pocus sequel will be released on Disney+ on Halloween, also known as October 31, in the autumn of 2022! Several cast members from the first movie are returning, including the leading ladies who play the three Sanderson sisters and Doug Jones as Billy Butcherson (the ex-boyfriend of Winifred Sanderson).

New characters who bring back the Sanderson sisters are Becca (played by Whiney Peak), Izzy (played by Belissa Escobedo), and Cassie (played by Lilia Buckingham). Lilia Buckingham has shared an enthusiastic post about her role and her time on the set of Hocus Pocus 2; you can see the Instagram post and these three new Hocus Pocus actresses below!

Are you excited to see Hocus Pocus 2? Were you lucky enough to be nearby during filming in New York City?