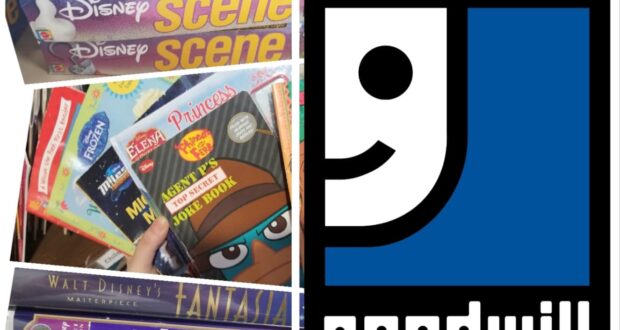 In Search For More than the Disney Store: Thrifting Disney

Due to the Pandemic, nearly all Disney’s flagship stores have closed. As a Disney fan, I, like many, was left with a tough question: Where is the best store for a Disney Fanatic to turn for a magical in-person shopping experience?

Previously, I looked into the best Disney finds at the local dollar store, uncovering cheap fun treasures perfect for parents with small children. But what about other Disney fans? What about those of us who want fun, nostalgic finds for a great price? This led us on a hunt through local thrift stores.

When exploring your local thrift store shelves, results may vary, and one might consider perusing multiple stores in your area for the widest variety of items. But when one is willing to go exploring, there is a veritable wealth of Disney treasures at your fingertips. From Disney apparel to decor, to media, to home goods. The fun of the search and the thrill of a deal is nothing compared to finding a vintage or rare item that one could never find at a normal Disney store. As an avid thrifter myself, I have a fantastic collection of thrifted Disney items in my own home, but to give a more first-hand experience of what one person could find, I went back into the field.

Here are some of my best finds: 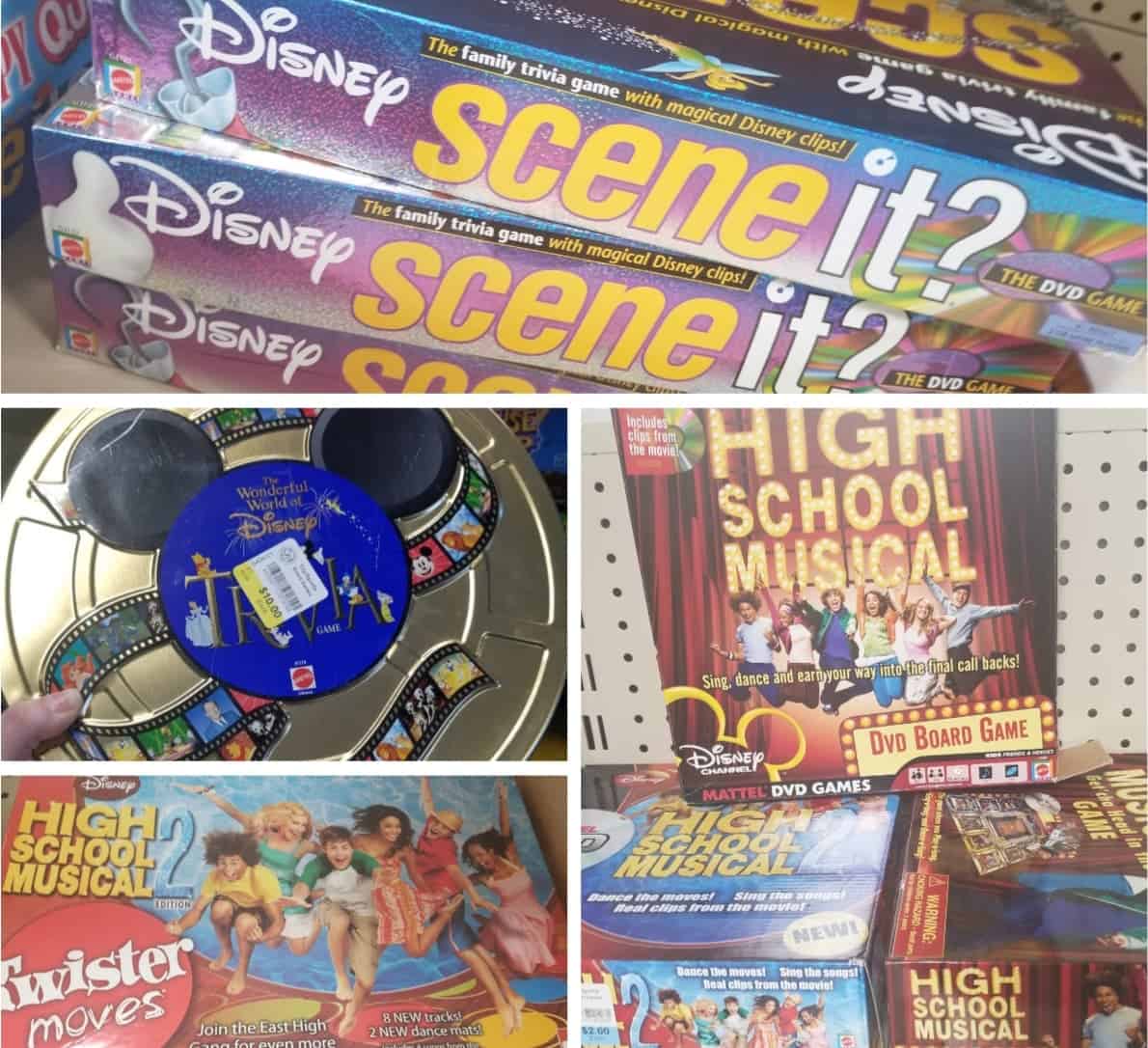 Want to be a hit at your next game night with friends? Break out one of these fun Disney classics. As an avid thrifter, I have never come across a thrift store without at least one Scene It DVD Game on its shelf. Though the fad of DVD board games has long passed, the advent of interactive screen-based party games like Jackbox Party Packs has re-popularized the basic format, with game pieces simply replaced with smartphones. Disney: Scene It is an oldie but a goody, with plenty of mini-games as well as Disney trivia from live-action and animated Disney classics. Play along with the DVD “Party Mode” for auto-generated Disney-themed trivia and mini-games, or break out the game board and call dibs on your favorite Disney character as your game-piece to move your way to the winner’s circle.

Any variety of Disney-themed trivia games with fellow Disney Fanatics is likely to get very competitive but are still fun for all and usually can be found in great condition. 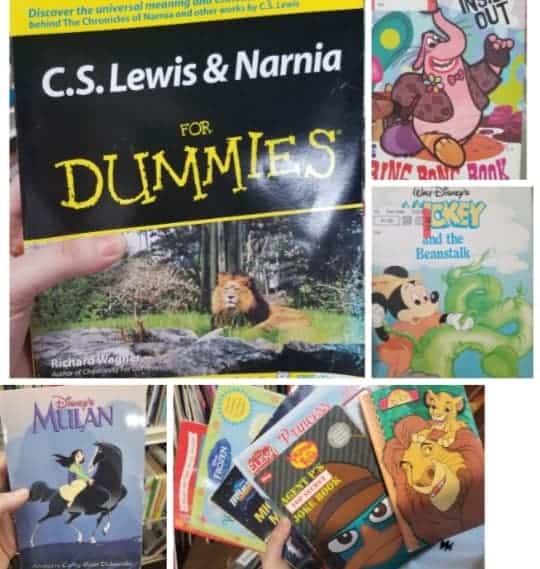 From movie series guides and Little Golden Books to novelizations of animated classics and picture books from Disney Channel animated series. Rare and vintage Disney books can often be found at the thrift store. Fun for building the library of avid collectors and great for nostalgic gifts for children and adults alike. Personally, I like finding children’s books from live-action Disney properties: The Chronicles of Narnia, The Pirates of the Caribbean, and Star Wars. Most of the time, these will have pictures of movie stills, but sometimes there will be unique artistic renderings of the characters that make for fun collectibles. But the more common and cheap picture books can be up-cycled and used to make fun decoupaged crafts for die-hard Disney fans. 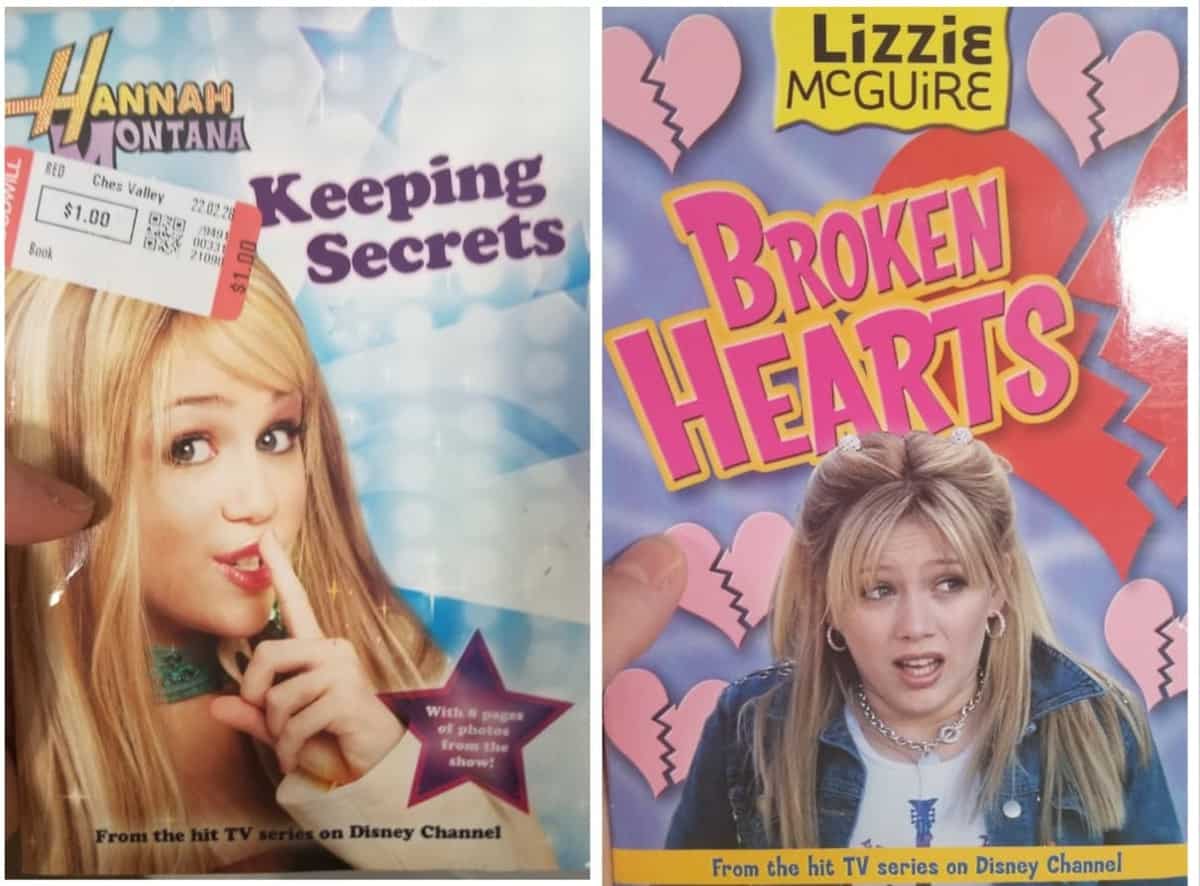 A type of book deserving of its own category entirely, thrift store shelves are often full of young adult chapter books featuring Disney Channel stars. Hannah Montana stories are the most common in my findings, chronicling her various misadventures while hiding her secret pop-star identity. Though occasionally, others like my childhood hero Lizzie McGuire can be found.

Marketed initially to preteens and popular at Scholastic book fairs, these books are best paired with sparkly lip gloss and butterfly hair clips. Any kid from the 90s and early 2000s, especially those born in the early 90s who will be turning 30 this year, would love to receive these as a blast from the past. 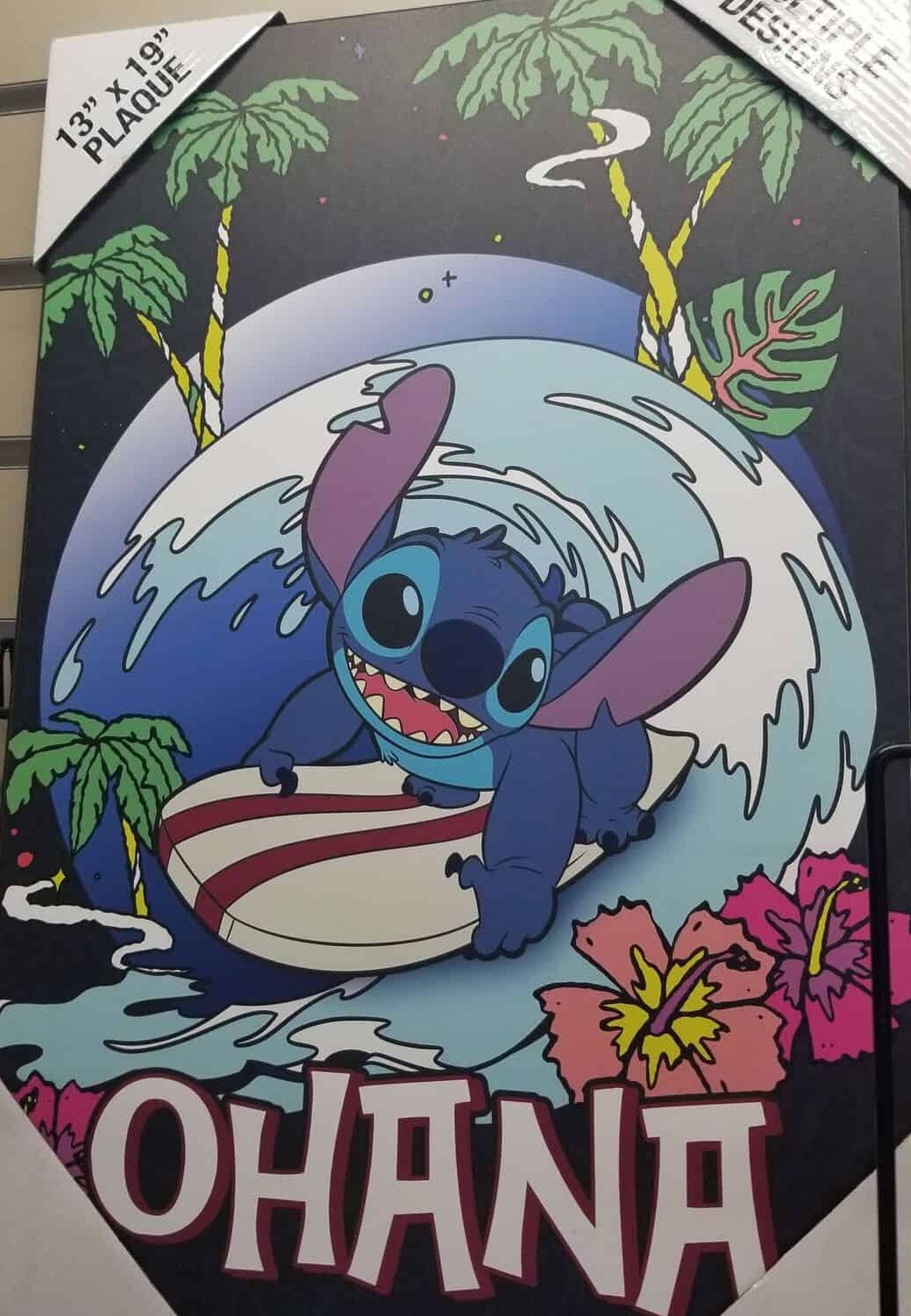 When heading off to college, moving to a new apartment, or starting the first home as a couple, it is very comforting to surround yourself with the familiar faces of Disney. Often thrift stores will have mint condition wall art or framed posters in their stock, and these will occasionally include high-quality prints or even collectible lithographs. Many times, framed lithographs will include certificates of authenticity. There is absolutely no limit to the ways that a small bit of magic can brighten up a space. 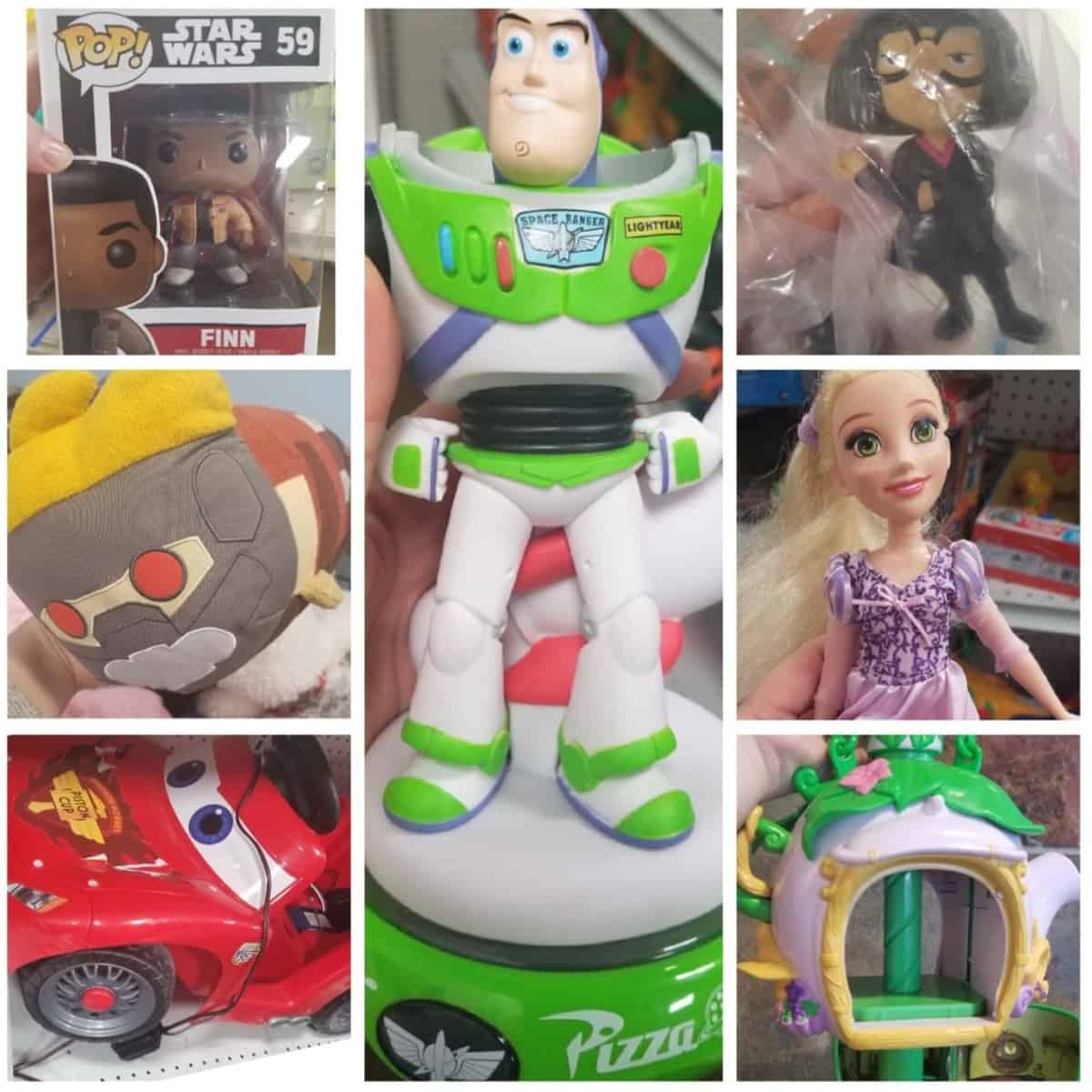 Funko POP Vinyls, Tsum Tsums, McDonald’s Happy Meal toys, Disney Princess Dolls, and Disney playsets are some of the treasures one can find at the local thrift store. POP Vinyls can be found both in and out of the box at a fraction of the price. Adorable Tsum Tsums can be dug out of stuffed animal bins. Quality collectibles are often hiding behind puzzles and blocks on toy shelves.

Ziploc bags full of various highly-collectible vintage Happy Meal toys are often found selling in sets. Disney dolls out of the box–often with imperfect hair and various states of undress–can be found stacked into buckets with other Barbies.

I have had great luck with toys in perfect condition. But kids at heart can rescue any of these items in need of TLC and restore them easily. In my experience, I often find that fans will prefer the process of buying and restoring dolls or collectibles as a fun project to simply buying one. 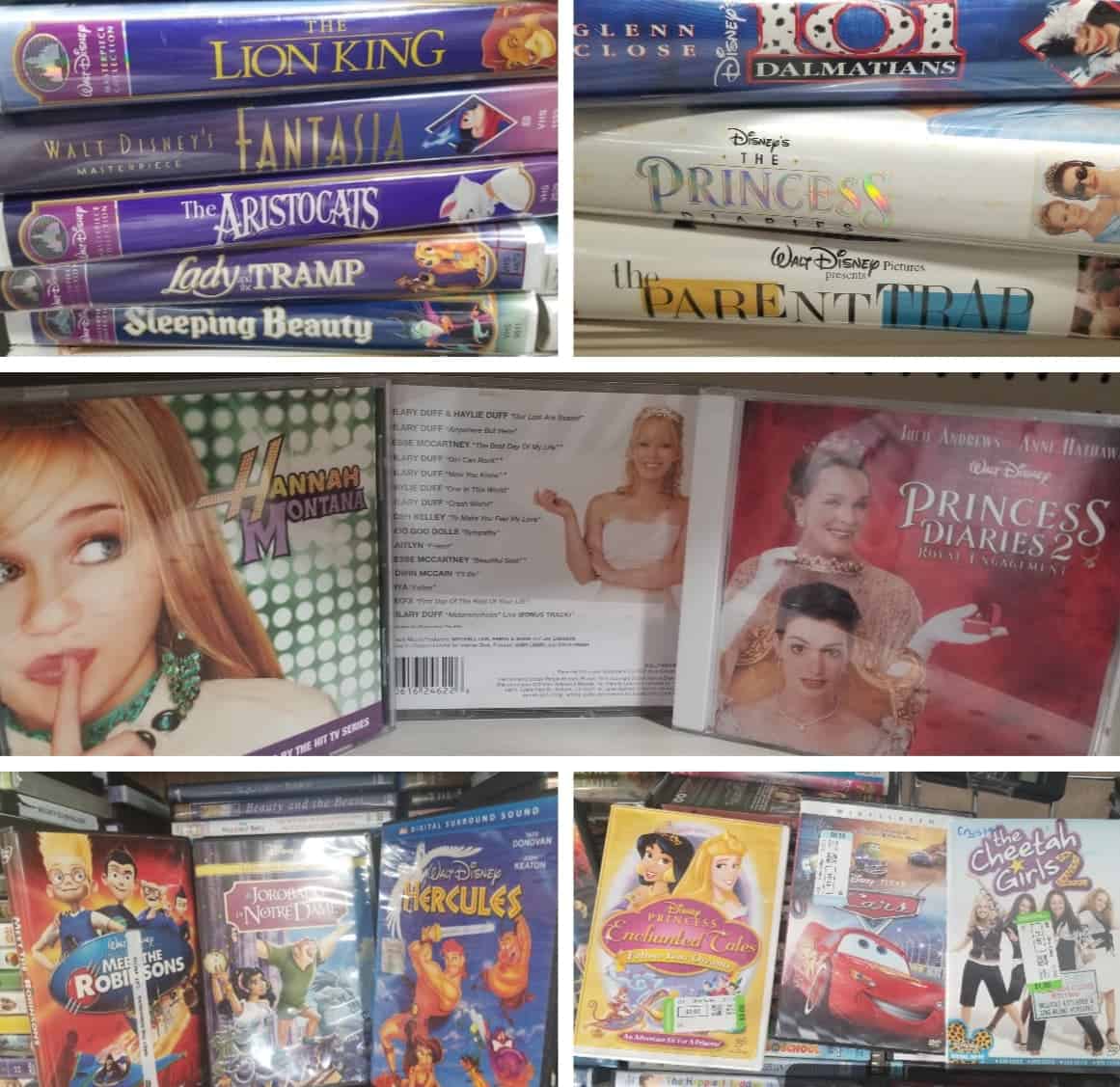 Though we now have the streaming services like Disney Plus and Spotify, not every Disney movie is featured on the platform, and DVDs, VHS tapes, and Disney soundtracks are highly valued to collectors. Disney DVDs–especially different special editions and anniversary releases–are a great collector’s item to have on your shelf. VHS tapes, in particular, are a very worthy buy, as the complete experience of opening, putting in, and playing a tape is enough to send one back to their childhood. They can also have a high resale value, especially when sold in sets. And though not many buy CDs, I have enjoyed accumulating classic Disney movie soundtracks from films and found each to be like individualized time capsules. 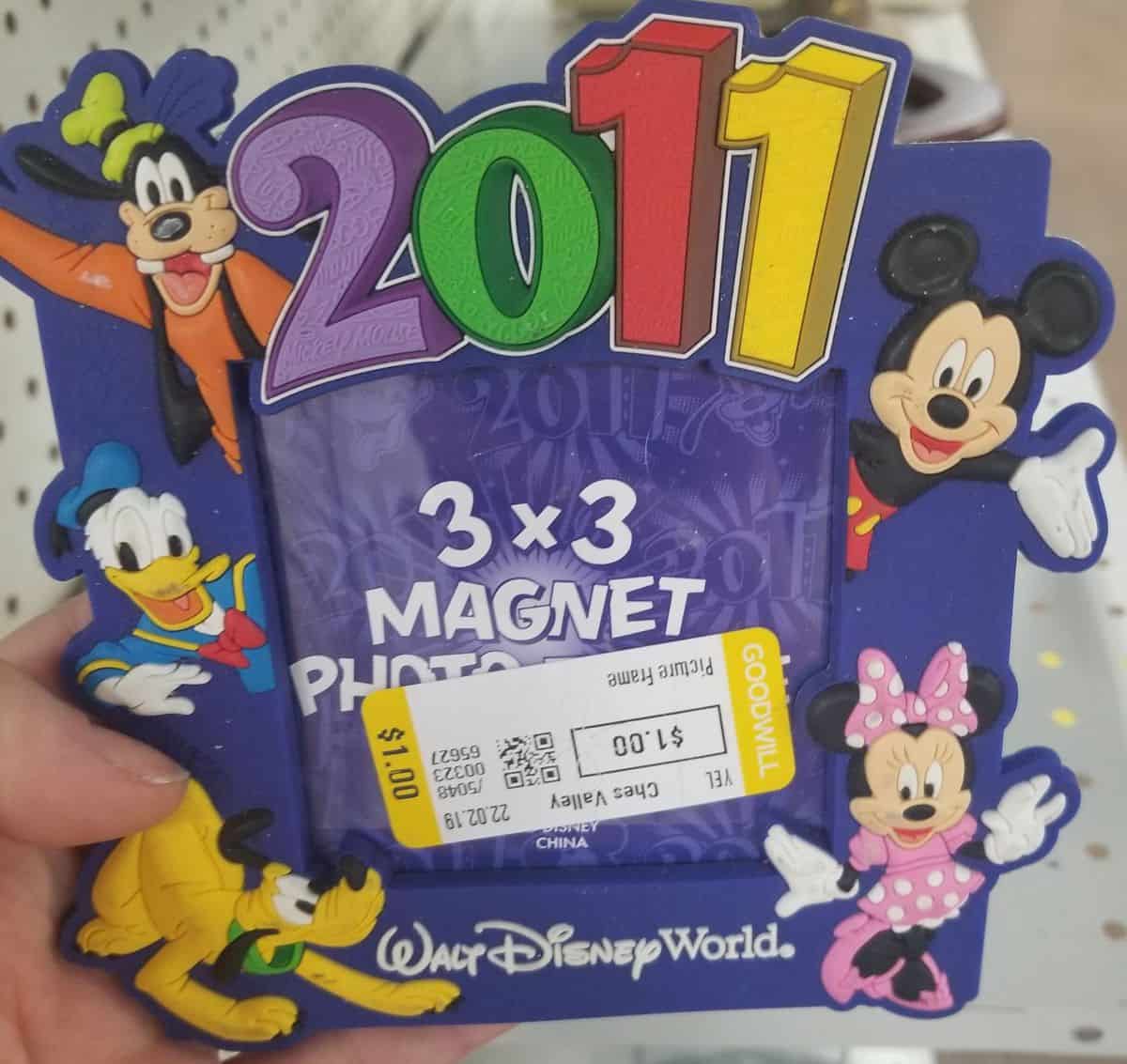 Walt Disney World and Disneyland picture frames, mugs, and shirts from the Disney Parks can often be found at the thrift store–some with specific years. I have found some fun Disney Parks exclusive merchandise, including a very awesome Mickey EPCOT shirt in the past.

If you went on a trip to Walt Disney‘s Magic Kingdom and regretted not setting aside more cash for merchandise, don’t settle for scalpers just yet. Head to your local thrift store. See if you can find something to help you relive those magical memories from the year of your vacation for a crazy discount. 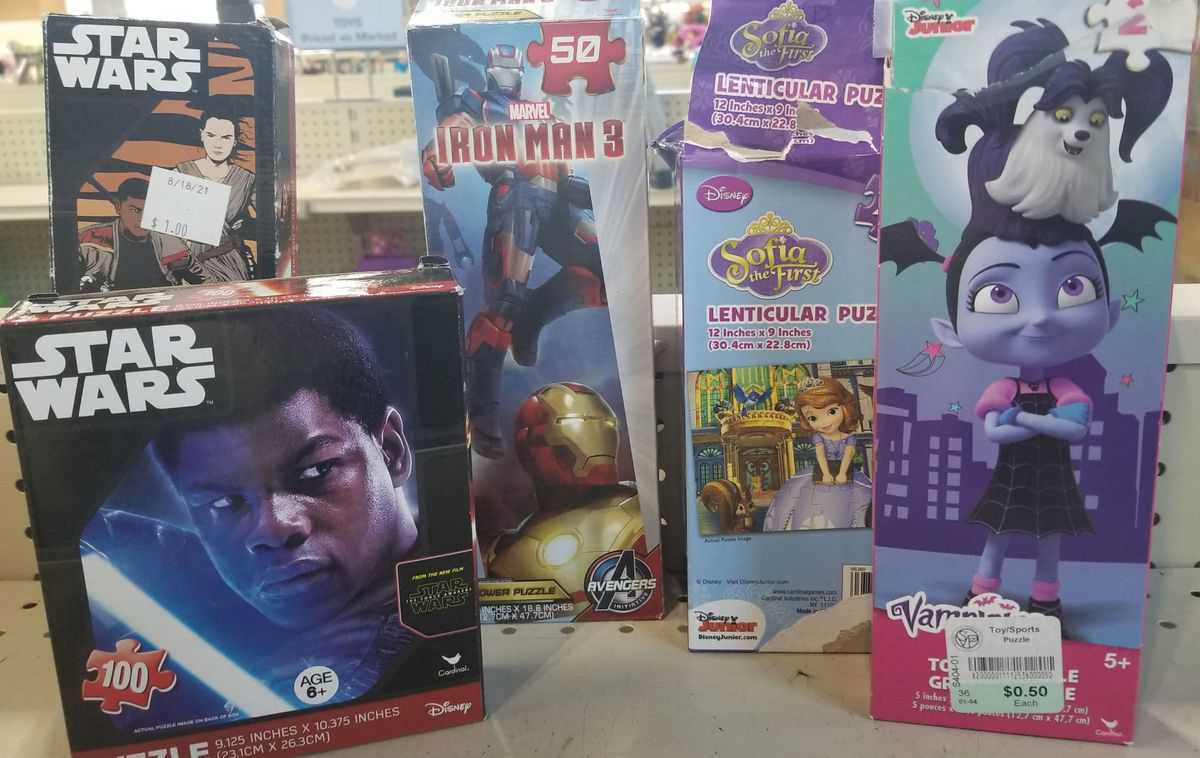 Disney Puzzles are often found at thrift stores and make great cheap and easy gifts for children. These, like cheap children’s books, can also be bought and used for craft projects, like an upcycled picture frame. But for a certain kind of Disney collector, puzzles are for assembling, bonding with puzzle glue, framing, and displaying as a piece of unique DIY Disney art. I was particularly drawn to the tall and slim 50 piece Star Wars Puzzle with its unique illustration style as a possible decorative piece.

These were just some of our favorite finds from thrifting Disney! What treasures still hide in the racks and shelves of your local thrift store? What cheap buy can you transform into a profitable resale, restored collectible, or fun craft?

But seriously, what Disney scores have you made while thrifting? What was the best Disney merch flip you made? Reach out to us via email for Facebook Messenger and share your Disney thrifting stories with us today!