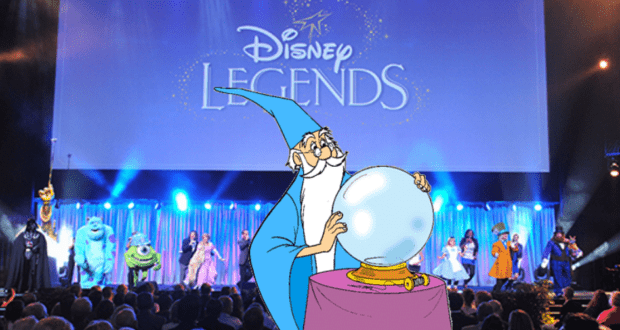 Looking Ahead to the Upcoming D23

Disney fans everywhere are rejoicing in the triumphant return of D23 for the 2022 season. The ultimate Disney fan mega event, D23 is typically held on a semi-annual basis but was postponed last year due to COVID-19 concerns.

We at Disney Fanatic are just so excited by the extensive lineup of happenings that have already been announced throughout the course of the three-day event. And with Day One vastly approaching, we’re eagerly awaiting what fun things will be revealed to us first. Here’s the order of events, as we know them, given in chronological order: 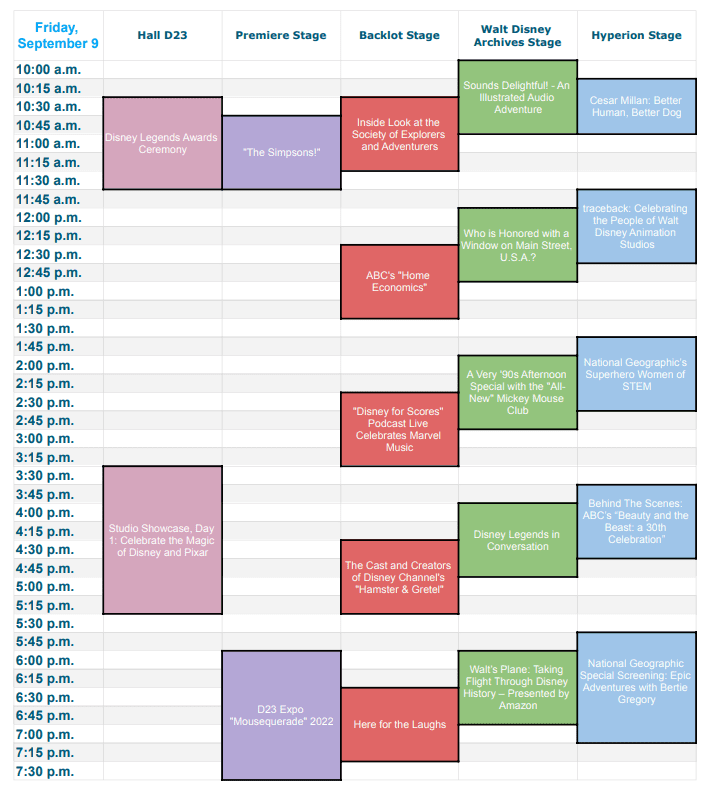 The earliest event happening on Friday will be at 10 a.m. on the Archives Stage with “Sounds Delightful!” Disney artist and historian Stacia Martin will be onsite to share music and memories from her extensive personal collection of Disney Vinyl Recordings.

Next, everyone’s favorite ‘Dog Whisperer’ Cesar Millan will be in the house, on the Hyperion Stage, for photos, signings, and working a little doggie discipline magic between 10:15 a.m. and 11 a.m.

Arguably the event most are looking forward to on Friday is none other than the Disney Legends Awards. These will take place from 10:30 a.m. to 12 p.m. at the D23 Hall, in which honorees will include: Anthony Anderson, Kristen Bell, Chadwick Boseman, Patrick Dempsey, Josh Gad, Idina Menzel, Ellen Pompeo, and Tracee Ellis Ross.

Also happening at 10:30 a.m., and lasting through 11:30 a.m. there will be an “Inside Look at the Society of Explorers and Adventurers” event on the Backlot Stage, shedding some light on the mystery of this fictional organization that is such an underground part of Disney theme park attractions.

From 10:45 a.m. to 11:45 a.m. the cast and creative team of the long-running cartoon series The Simpsons will be live on the Premier Stage for discussions, signings, and photo ops.

At 11:45 a.m. the Walt Disney Animation Research Library is presenting the hour-long special “traceback: Celebrating the People of Walt Disney Animation Studios,” offering new insight into Disney’s past, including technical and artistic contributions from important folks you may not know about.

From 12 p.m. to 1 p.m., on the Archives Stage we will get to learn all about the folks who are honored with a window on Main Street U.S.A. 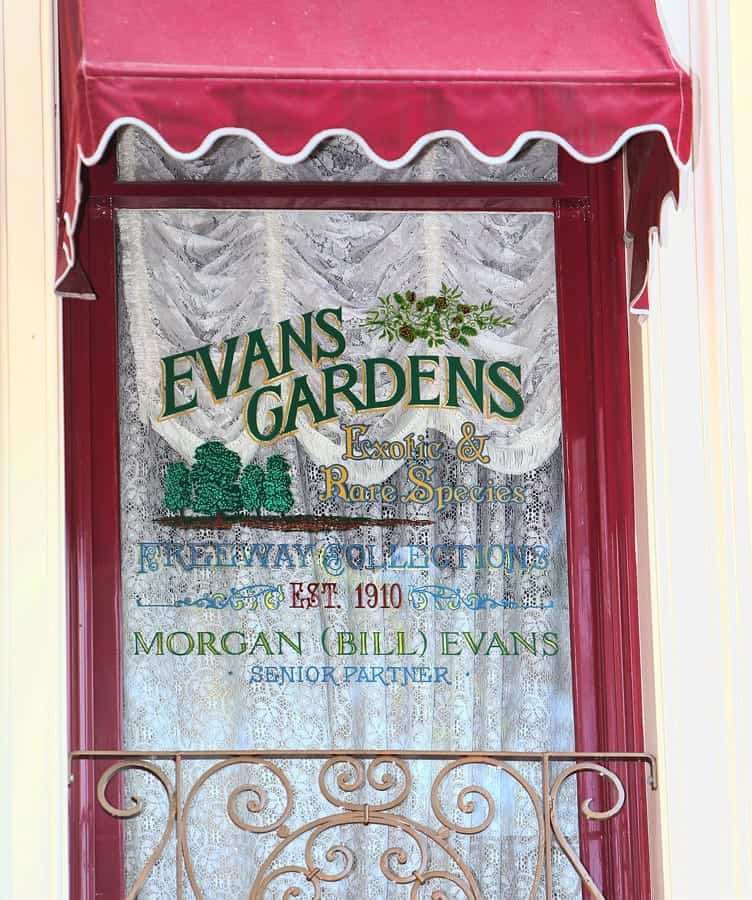 Join the cast and crew of ABC’s Home Economics on the Backlot Stage at 12:30 p.m., for conversations, meet and greets, and a first-look at an upcoming season three premier that was shot on location at Disneyland.

Taking place on the Premier Stage from 1 p.m. to 2:30 p.m. will be the Disney & Marvels Games Showcase, which will include all-new announcements, reveals, and trailers for upcoming games by Disney, Pixar, Marvel, Lucasfilm, and 20th Century Studios.

Go on an hour-long flashback into the 1990s, starting at 2 p.m. on the Archives Stage with appearances by the former Mickey Mouse Club members from back in the day, many of whom have gone on to launch their careers as big stars of today. 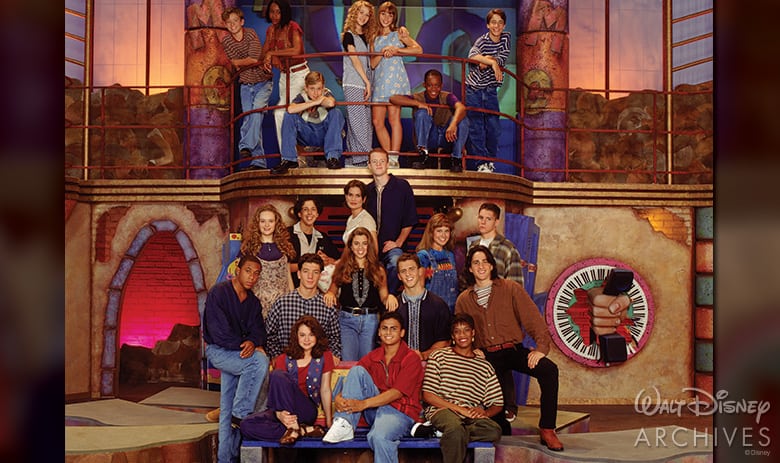 Fans of cinematic musical scores take note, there will be a live podcast about music featured primarily in Marvel works happening between 2:30 p.m. and 3:30 p.m. on the Backlot Stage.

For those waiting to learn the latest on what’s hitting theaters or coming to Disney+ soon, you won’t want to miss Studio Showcase, Day 1 Celebrate Disney and Pixar from 3:30 p.m. to 5:30 p.m. at Hall D23.

We’ll also get an exclusive behind-the-scenes look at ABC’s Beauty and the Beast: A 30th Celebration from 3:45 p.m. to 4:45 p.m. on the Hyperion Stage.

From 4 p.m. to 5 p.m. the newest Disney Legends will be back for some can’t-miss conversation at the Archives Stage.

Taking place on the Backlot Stage between 4:30 p.m. and 5:30 p.m. the cast and creative team behind Disney’s Hamster & Gretel will be live for meet and greets and photos with fans.

Be sure to swing by the Hyperion Stage from 5:45 p.m. to 7:15 p.m. for a special screening of National Geographic’s Epic Adventures with Bertie Gregory. 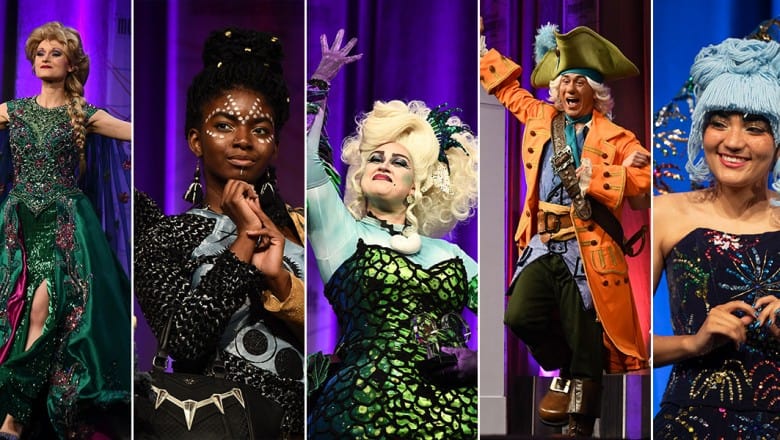 Also taking place at 6 p.m. will be Walt’s Plane: Taking Flight Through Disney History. Presented by Amazon, this hour-long showcase led by Disney Archivist Ed Ovalle will take place at the Archives Stage.

The last event for the evening will be from 6:30 p.m. to 7:30 p.m. on the Backlot Stage. Presented as “Here for Laughs” this showcase will feature some of your favorite stars from comedy, discussing their careers and what goes into making people laugh.

All event showtimes are presented in Pacific Time. Also take note that while not every happening will be livestreamed, Disney Fanatic will be actively updating you on all the late-breaking news and exciting reveals as they unfold.