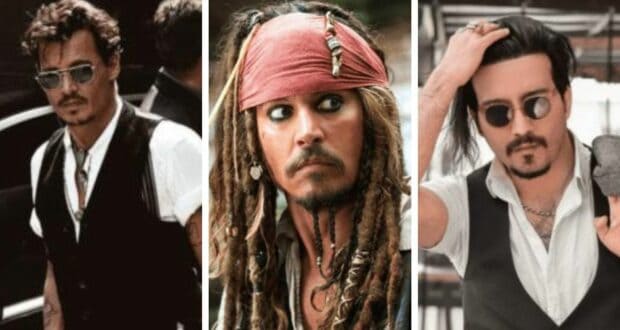 Johnny Depp has been the talk of the town in recent months, both due to the latest news about the Depp vs Heard trial (a defamation trial involving the Finding Neverland actor, his ex-wife Amber Heard, and Heard’s op-ed in the Washington Post) and due to his statement during the trial about returning to the role of Captain Jack Sparrow in the Pirates of the Caribbean movies.

Johnny Depp’s biggest reveal during the trial seemed to be his declaration that he would not return as Captain Jack Sparrow, not even for $300 million and thousands of petition signatures pleading for his return — but Depp’s personal life and family life was also exposed during the trial, and his brother was revealed! Now, a man who looks extremely similar to Johnny Depp has been spotted, and fans have been speculating about whether or not this stranger is the elusive second Depp.

You can see the newcomer who looks like Johnny Depp in the right portion of the photo shown below. Is this Daniel Depp, the brother who was mentioned during the Depp vs. Heard trial (and who reportedly works as an author and bookseller with Simon & Schuster)? We have to admit that the striking resemblance between the two men is uncanny. The potential Daniel Depp began getting noticed by Johnny Depp and Jack Sparrow fans after he was spotted in a video showing a religious ceremony with ceremonial sticks in Tabriz, Iran (shown below). Can you see the resemblance?

Apparently, Amin Sa’les is the name of the man, not Daniel Depp — and he is a model, not a writer. However, the Johnny Depp lookalike’s job as a model certainly indicates that someone has noticed his good looks; whether or not they have noticed that he bears an uncanny resemblance to the Pirates of the Caribbean actor is unclear!

Johnny Depp as Captain Jack Sparrow and Orlando Bloom as Will Turner in Pirates of the Caribbean: Curse of the Black Pearl. Credit: Disney

Many celebrities have lookalikes who bear a striking resemblance to them, including celebrities who have worked with them before (just ask Jessica Chastain and Bryce Dallas Howard, or Zoe Saldana and Thandie Newton, or Keira Knightley and Natalie Portman) — but seeing a person who looks just like a celebrity, and is not famous themselves, is always intriguing!

Did you have a hard time telling the difference between Johnny Depp and his lookalike with the striking resemblance in the photo shown above (and in the video of Amin Sa’les)?