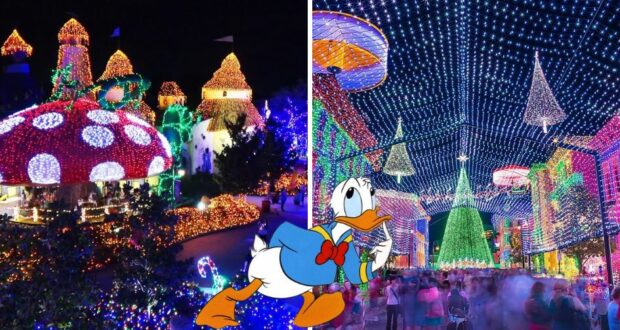 Night of a Million Lights Cancelled: Is Disney Bringing Back Dancing Lights?

Kissimmee’s Give Kids The World is an incredible charity in Central Florida that offers free weeklong vacations to critically ill children and their families. The village hosted “Night of a Million Lights,” a holiday highlight for Florida. Unfortunately, it is now being discontinued. Could Walt Disney World be making plans to use their borrowed lights once again?

RELATED: Disney Supports Night of a Million Lights Event at Give the Kids the World Village

Give Kids The World began hosting “Night of a Million Lights” in 2020. With COVID closures, this was an ideal way to bring in some income during the difficult time. The event ran for two years, with news now that it will be discounted this 2022 holiday season.

@GKTWVillage took to social media to share, “We’re overjoyed that GKTW is back to operating at full capacity! To remain focused on our mission to create life-changing experiences for wish families, we’ve decided to discontinue hosting Night of a Million Lights at the Village. Thanks to everyone who made the event possible!”

While we’re so thrilled to hear Give Kids The World Village is now running at full capacity, “Night of a Million Lights” was a memorable holiday event in Central Florida that will be greatly missed. Its short two years still had a big impact on its surrounding community.

Night of a Million Lights had roughly 3.3 million lights, borrowed from Walt Disney World Resort. The lights were readily available as Disney decided in 2016 to end the two-decade-old “The Osborne Family Spectacle of Dancing Light” at Disney’s Hollywood Studios.

RELATED: What You Need to Know: Disney World Christmastime 2022 Festivities

When hearing the news of Night of a Million Lights being discontinued, we couldn’t help but ask what holiday light tradition we could enjoy next? Our minds quickly went to how Disney will now be getting their borrowed Christmas lights back… so could some holiday light magic be in the works at Walt Disney World Resort?

With the Streets of America (the former location of Osborne Family Spectacle of Dancing Lights) no longer at Disney’s Hollywood Studios, thoughts on where the lights could be used make the Disney mind wander!

We would happily enjoy a dancing lights show at any one of the Disney Parks or Disney Springs.

We’d love to see Holiday Dream Lights return to Cinderella Castle at Magic Kingdom Park. At EPCOT, the lights could be used throughout the EPCOT International Festival of the Holidays. Disney’s Hollywood Studios newer Grand Avenue could be a good place for holiday lights. Or Disney could always use the former Primeval Whirl space in DinoLand U.S.A. at Disney’s Animal Kingdom for a light show!

Of course, all of this is speculation as Disney has yet to report what they will do with their returned 3.3 million lights from the Night of a Million Lights cancellation. We will be sure to update Disney Fanatic readers if the theme park announces any plans for a dancing lights return.