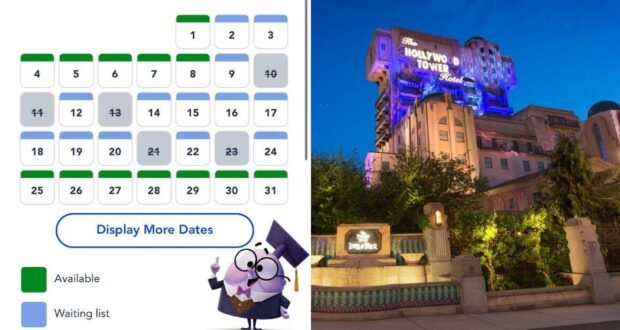 In preparation for a busy post-pandemic summer season, it appears that one Disney Resort is testing one way to increase Guest satisfaction while Theme Park Reservations remain in place.

The Disneyland Paris Resort has introduced a “waiting list” feature Guests can join on select days where all of the Theme Park Reservation availability for Disneyland Paris and Walt Disney Studios Park is already taken.

The news comes to us from Disneyland Paris Insider @DLPReport, who explains via Twitter, “A new ‘Waiting List’ feature is now available for AP Park Reservations. Guests are able to sign up for the list on some of the sold out days (marked in blue) and the system will automatically notify them if and when their reservation is confirmed.”

“Once the request is made,” he continued, “you’ll get an email, and are able to see and manage your requests under a new ‘Waiting List’ section in the system:”

Once the request is made you’ll get an email, and are able to see and manage your requests under a new “Waiting List” section in the system: pic.twitter.com/kGrBNCXy80

It should be noted that, according to Disneyland Paris’ website, Guests are able to cancel and change their Theme Park Registration “anytime up to 10:00 am (Paris local time)” on the day of their visit. And as of June 13, Disney’s European Resort states plainly to Annual Passholders, “Availability on our reservation system changes frequently. We encourage [you] to come and check it out regularly.”

For non-Annual Passholder, Disneyland Paris offers a lower-cost “dated ticket” that Resort Guests purchase specifically for their desired day, streamlining the reservation process and eliminating much of the ambiguity still present in the current Disney World Resort Reservation process.

Related: US to End Covid-19 Testing Requirements for International Travelers

It can be argued that the addition of a waiting list increases the level of ease and Guest satisfaction when it comes to securing a day in the Disney Theme Parks. No longer do Annual Passholders need to constantly check the website for Park availability. They simply join the waiting list and wait to see if enough people change their minds to help their wishes come true. Guests will be added automatically and will receive an immediate e-mail confirmation. It is unclear if this feature will become available for Disneyland Paris Park ticket holders.

This summer is set to be an exciting one as a new Avengers Campus opens at Walt Disney Studios Park.

It is important to note that Disney Parks, Experiences, and Products has used Disneyland Paris in the past as a testing ground for certain policies that were later added to the domestic Parks at the Disneyland Resort in Southern California and the Walt Disney World Resort in Central Florida. The most notable policy, for better or worse, was the new extra-cost line-cutting system they called “Disney Premier Access” and became known at Disney World as “Lightning Lane Access.”

We have reason to believe, then, that changes to the Guests’ experience like the addition of a “waiting list” could become available for Guests looking to visit Disneyland Park, Disney California Adventure, Magic Kingdom Park, EPCOT, Disney’s Hollywood Studios, and Disney’s Animal Kingdom in the near future. Disneyland in California, for example, is already attempting to deal with issues regarding their Park Passes, and it has apparently escalated to the point where it has become necessary to punish “no shows.” But there is no official word on the matter at this point, and the idea of a “waiting list” being added to Disneyland and Disney World’s Theme Park Reservation System remains hopeful speculation.

We at Disney Fanatic will continue to monitor Disney Parks news, and we will update our readers when more developments come to light.