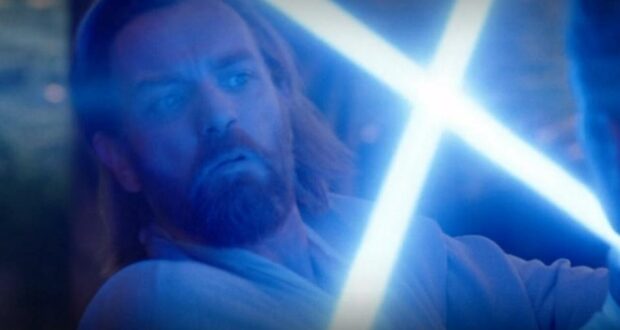 ‘Obi-Wan Kenobi’ Part V Made Me Laugh When I Should’ve Cried, Worst *SPOILER* Scene in the Saga

Just when I thought this straight-to-streaming installment of the Skywalker Saga could not get any more disappointing, a new episode came along to prove me wrong.

Part V of Star Wars’ Obi-Wan Kenobi dropped on Disney+ on Wednesday, June 15, and with it, one of the weakest deliveries yet. After four lackluster attempts to draw emotional investment from any Star Wars fan who isn’t swept up in blind L.A.R.P.-level Rebel Alliance tribalism and does not keel over simply at the sight of Leia, Obi-Wan, Luke, or Darth Vader, Deborah Chow and writers Joby Harold and Andrew Stanton deliver a shaky 42 minutes of rushed, function-based storytelling that forces us to grasp, absorb, and emotionally savor even the most important plot elements like someone holding out a glass of water for a marathon runner might. If they were looking to draw tears, they as well have been trying to ring drops of water out of a dry sponge. Immediately after being expected to melt at the first glimpse of the wide-eyed refugee kids’ faces, we are thrown into what can only be described as a low-budget knock-off of the lead-up to JRR Tolkein’s Battle of Helm’s Deep. Oh, and we get one more like from Tala about her backstory. Then, once again, showrunners try to force sympathy and support for the underwhelming–and annoying–antagonist, Reva Sevander/Third Sister. Reva also takes part in the most predictable and unneeded lightsaber duel yet.

But I am happy to admit that 5/6 of the way through this limited series, Moses Ingram did NOT deliver the worst acting performance of the main cast! No, that reward now belongs to Indira Varma and her performance as Tala. After expecting the audience to gain the same level of emotional support in two and a half rushed TV episodes as if she was a lead character in the three prequel episodes, viewers are forced to sit through the worst performance of a character’s death in arguably the entire Star Wars franchise. After giving the slowest overdramatized real-time reaction to getting shot in the stomach, Tala spends her last moments in the embrace of her mute droid, gazing into his eyes as if he were her lover. It was weird and satiric.

The stunning camera work, which has been the shining light of the entire show, also faded away to a shaky, cutty mess from weird angles. The episode also cuts in and out of a scene with Obi-Wan and Anakin circa Attack of the Clones when Anakin was still a padawan. It is one of the better moments of the episode and provides a fun, no-stakes lightsaber battle that Obi-Wan is clearly reflecting on in how he deals with Darth Vader. But neither McGregor nor Christensen were given a de-aging CGI treatment, and like Henry Winkler on Happy Days, the audience can clearly tell Christensen’s bad boy is not 18 anymore. I can appreciate the showrunners’ attempt to give us all a plot twist and give Ingram’s Inquisitor character the background of a youngling who survived the massacre of the Younglings in the Jedi Temple, but it felt cheap. I mean “1980s movie” cheap. Throughout this entire series, the writers have tried to garner fan support for Reva by making her a victim. It is one thing to have an underdog with a chip on her shoulder. It is one thing to have a double agent at her level in the enemy’s camp. But it is another to maintain the fallacy that victimhood raises someone’s merit and yet another to suggest that some bad guys are secretly good and worth rooting for even though the evidence shows they have done nothing to better anyone’s end but her own. Darth Vader holds far more merit than she does and garners more of a following because he is a better bad guy.

Speaking of Darth Vader, he provides the best scene in the show. The entire choreography of this fight is fantastic as well. When Reva challenges him, he demonstrates a sense of honor. Instead of drawing his lightsaber, he uses The Force to demonstrate his dominance, not unlike when an older brother can stave off a barrage of punches simply by stiff-arming his little brother. He disarms her but then splits her dual blade and gives her the other half. They both know she can’t beat him, but there is a sense of gracious honor in allowing her to cross blades with him before he strikes her down.

Then a round of predictability occurs. Vader stabs her, she falls, and sees the Grand Inquisitor did not actually die in Part II. He tells her how strong revenge can be for someone’s will to live, and that provided enough cheap foreshadowing to tell us that we will see her in the finale.

Part V ends with Obi-Wan, Leia, and the rest of the rebellious refugees escaping Vader’s clutches and a tease that we are going back to Tattooine for the final showdown. I will be ready to watch it when the time comes.

All five episodes of Obi-Wan Kenobi, along with the rest of the Skywalker Saga are available for streaming now on Disney+.