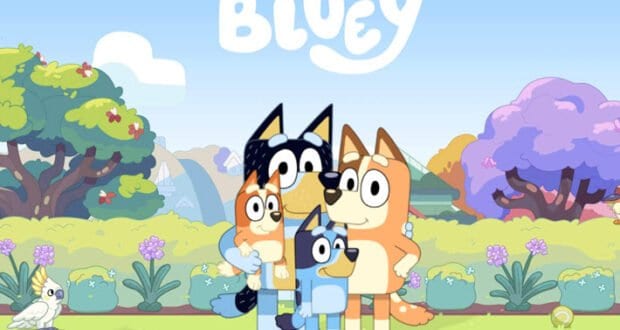 Obsessed: Confessions of a Mom who Loves Bluey

Have you ever been at gathering- maybe a child’s birthday party or summer barbecue- and found yourself in a conversation with other adults about the show Bluey?  No, no… me neither.

But, let’s say that you did.  This hypothetical conversation is about a children’s animated television show.  About a cartoon dog and her family. On Disney Junior.  Did I mention that, as this conversation is unfolding, the kids are off playing?  You’re not having this conversation for their sake.  No, this conversation is happening, organically, among the adults.  Everyone has something to contribute, too, because all of you actually kind of, a little bit, like Bluey.

Maybe you’ll even admit that you love it.

I should pause here, just in case you’re unfamiliar with this Ludo Studios/BBC Studios series.  Bluey takes place in Australia. According to the show’s creator, Joe Brumm, it is inspired by his experiences of raising his two daughters, and is set in a city modeled after Brisbane.  In the show, we get glimpses into the unstructured, imaginative play of two young pups. Bingo and Bluey’s parents are great role models for their children (and for us), and the show is an endearing depiction of family life. 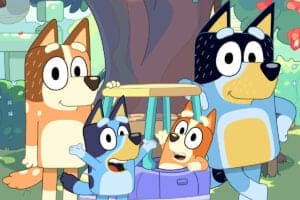 Yes, this wildly popular show is simply about the down-time activities and family dynamics of a Heeler family in Australia.  It seems a bit simple, doesn’t it?

I can’t lie to you, dear reader.   I confess that I’m an adult Bluey fan. I’ve even watched an episode or two without my child, because it was the best thing on television at 10pm.  In my defense, I work in a child-centered field.  I’m very interested in social-emotional learning and in child development.  Still, I don’t think that’s the only reason I’ve become obsessed with Bluey.   I’ve spent more time reflecting and pondering about the feelings the show brings up for me than seems reasonable.

I know I’m not alone in my obsession, though.  Why do parents love this children’s television show about a 6-yr old Blue Heeler and her family? Here are some of my thoughts on why adults love this utterly charming Australian cartoon. 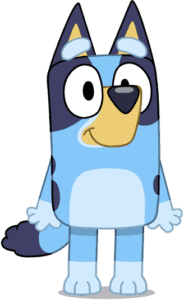 I have to ease into the serious stuff and start with a superficial one.  The accents on the show are just great.  Maybe I’m just a tad too fond of this particular accent, but there’s something so relaxing about anything resembling a British accent, and the Australian/New Zealander brand of accent is particularly charming and quirky to my American ears.  It’s just fantastic to listen to.  I’m also amused by the Aussie terms that the show uses, and even more so when my own child picks up them.  I’ve been called “Mum” more than once, and I secretly love it.

As if it’s not enough that I relish every minute that Bluey is on the TV, we also bought the soundtrack. The music is a fantastic mix of beautiful, cute, ethereal, and upbeat tunes.  It’s melodic and fun, the perfect background music for playtime or cooking dinner.  You can grab a copy on Amazon.

The Episodes are Comedy Gold

Perhaps my favorite Bluey episode is Hairdressers. As the name would imply, Bluey and Bingo are pretending to be hairdressers, and their clients are Dad and Mum. Mum is pampered and Dad is found to have nits (aka, Lice) and is, well, “treated” for it. And Mum… she lets it happen.  Some are obvious, and they’ll make your family roar with laughter.  Other comedic elements are more subtle.  Take, for instance, Bandit and Chilli’s jobs.  Bandit works from home, and when we see his office it’s clear that he’s involved in archaeology or paleontology of some sort.  Chilli works in airport security.  Imagine that… dogs working in airport security.  And… digging up bones. 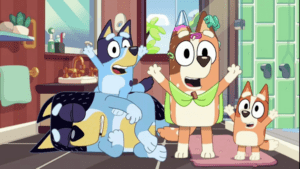 The Spotlight on Imaginative Play

Of all the TV shows out there for kids, this is among the best in the children’s content arena. Bluey reminds us of the critical role that unstructured play holds in child development.  A youngster watching Bluey will get lots of inspiration for imaginative play.  Bored on a rainy day?  Pretending to be Grannies on a city bus is a wonderful way to pass the time.  Parents will be reminded, too, of the importance of encouraging these pretend games in their children.

There are fantastic shows that teach concrete skills. Numbers, letters, facts about animals, colors, you name it.   When they teach it, kids learn it- all while being entertained.  But Bluey has somehow mastered the art of educating us in many more nuanced (but no less important) skills, like problem solving and how to apologize when you’re wrong.

Bluey is different in all the right ways.

It’s refreshing to see a television show that does not subscribe to traditional gender roles.  Bluey and Bingo are daughters of Chilli and Bandit, but they are girls without bows, feminine names, or gendered play.  Not that the traditional notion of femininity is anything to be ashamed of,  but it’s quite nice to see a show where it doesn’t really come into play if the characters are male or female.  This strikes me most often when my own son refers to Bluey as “he”- because Bluey does not look like the other female cartoon characters he sees on TV.

I also appreciate that both parents work, and it’s nice to see that primary caregiver on the show is a loving, sometimes silly (but always engaged) father.  Mum Chilli gets in on the action plenty, but it’s Dad who juggles his work from home gig with keeping the rambunctious pups occupied.

Bluey focuses mostly on the playtime spent between the title character and Bluey’s younger sister, Bingo. Bluey’s dad, Bandit, is laid-back and easygoing with his girls. He puts up with more child-inflicted torture than many parents would, but it’s all in the name of fun. Bandit reminds us, as parents, to let the kids be kids. To indulge in their fantasies. To be engaged and present (and not checking emails).  To get down on the floor and engage in absurd pretend scenarios.  Not only have I never seen Bandit say “no” to a game of pretend, he fully embraces them. It’s a parenting lesson that I’m still learning, even in my 7th year as a mom.

Bluey’s mum, Chilli, seems to be home a bit less than Bandit.  She is the parent in this scenario who works outside the home, but she’s also emotionally present when she is home.  Bluey gently reminds us, you can work outside the home and be there for your kids; but when you’re there with your kids, try to actually be there.  We can have jobs- whether outside the home or work-from home roles.   We can be tired and ask for a break.  We can forget all of the very important pool day supplies that our spouse kindly reminded us about.  But when we are with our kids, we have to try to be genuinely present in the moment.

I Feel Seen, Heard, & Understood as a Parent

I love a good Netflix series aimed at an adult audience. Mysterious shows about murders and coverups, adventurous hunts for treasure, and other wild stories- they’re all entertaining. But Bluey? Now that’s a show I can actually relate to. Bluey sometimes resembles everyday life so well that I feel like the show creators have been reading my journal.

Because let’s face it- I’m not a homicide investigator or a teenager trying to solve a mystery- I’m a parent, living in the suburbs, who has a kid following me around and asking me to pretend to be this and that. Bluey makes me feel seen, heard, validated- in the realest of ways. It’s a kids’ TV show, but it may also be the show I relate to most on all of television.

One such episode that tugged at my heartstrings the hardest was “Baby Race”. Innocently enough, in the episode Chilli and her mom friends are sharing stories about their children hitting developmental milestones. Chilli becomes concerned that Bluey is not meeting the milestones at the same rate as the other children. She checks in with the pediatrician, frets, and even skips the mom’s group to avoid the anxiety. At a later point, a more experienced mom detects the sadness in Chilli and reassures her, “You’re doing great.”

All too often as parents, we compare our babies to those of our peers. We doubt ourselves. We wonder if we’ll ever sleep normally again. We worry that we’re too permissive. Or too structured. We hope our children are “normal” or “typical.” We are excited if they seem to be “extraordinary” but we weep if we think they may be “behind” in any way. If we’re lucky, we have someone in our lives who reminds us that we are enough. That, despite all of our doubts and worries, we are, in fact, doing great. 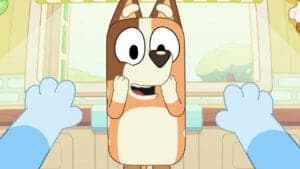 Is it okay if it’s a kid’s television show that’s reminding us that parenting is not a race?  Yeah, I think so.

It Reminds Us to Slow Down Children are only little for so long.  One day, they won’t request that silly pretend play session.  Bluey reminds us to slow down and get engaged and let the rest of the world go for a little while.

So, what are you waiting for? Head over to the DIsney Channel, Disney Junior, or Disney+ and watch your favorite episode- I know you have one!

Related:  Original Disney+ Content That Could Inspire New Attractions at the Parks