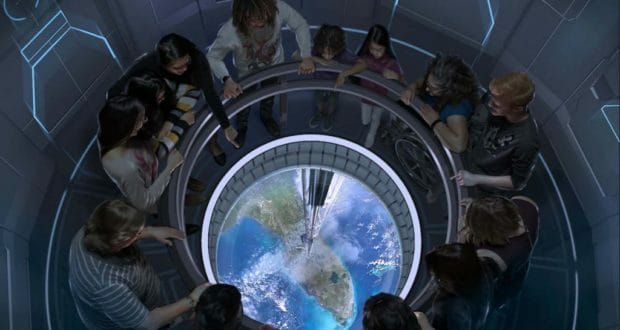 Did you know that October 4th through 10th is World Space Week? Officially defined as “an international celebration of science and technology, and their contribution to the betterment of the human condition,” World Space Week is recognized by more than 95 nations across the globe. At Walt Disney World Resort, EPCOT is unquestionably the most obvious Park of choice to flock to in honor of such a celebration, but it isn’t the only one. The fact is, space-enthused Guests may celebrate in multiple ways throughout all four theme parks. So get ready to unleash your inner space cadet while making your rounds at Disney this week with these star-studded suggestions.

If you’re a space-loving Disney fan bound for Magic Kingdom Park, then each and every must-do on your list can be tackled all at once by heading straight for Tomorrowland. Here you’ll find a whole host of attractions that incorporate the overall space theme to some extent. Here’s a look at what we found:

While out and about in Tomorrowland, be sure to stop in at Star Traders at its connecting location to Space Mountain. Here is a great place to get all of the usual themed Disney merchandise, clothing, and accessories, which are hallmark to any park visit. Some items in the inventory, however, do in fact advertise several of Tomorrowland’s ‘spacey’ specialties as well. You’ll also find a couple of incredible in-store exclusives too.

When you find yourself needing to refuel, consider a stop at some of Tomorrowland’s space-themed suggestions, including Auntie Gravities Galactic Goodies, Cosmic Ray’s Starlight Café, Cool Ship, and others. Don’t worry; the items on the menu are all familiar staples, compatible with earthbound tastes. However, there are some interesting intergalactic specialties you may want to explore. Two suggestions include the Mission to Mars Burger at Cosmic Ray’s and the decadent, crave-worthy coffee concoction Mission to S’mores, which can be found at Tomorrowland’s Joffrey’s Revive kiosk.

This Disney Park is perhaps the most firmly grounded on Planet Earth, as evidenced by its celebration of diverse, rich, and abundant life all over the globe. But that doesn’t mean there isn’t plenty to grab the interest of space-enthused explorers who come out to enjoy the day here. For those individuals, we offer two stop-by suggestions—DinoLand U.S.A. and Pandora—The World of Avatar.

The death of the dinosaurs and outer space are forever linked. So while a stop at DinoLand U.S.A. for a space-crazed Disney fan may seem like a bit of a stretch, it really isn’t as far-fetched as it may seem. And driving home this fact most firmly is the famed dark ride attraction known as DINOSAUR. For this ride, Guests gather into a “Time Rover” vehicle and are sent back to prehistoric times on a quest to bring back a 3.5-ton Iguanadon dinosaur. But it’s a race against time as the meteor that initially wiped out all life on Earth is about to strike at any minute! While this little venture may be a fictional thrill, it incorporates elements of space and time you can thoroughly enjoy nevertheless.

Related: Must Do Experiences At Disney World’s Animal Kingdom Park

Deciding to brake your journey here may depend on whether or not your interests are more grounded in the scientific aspects of space exploration or the possibility of extraterrestrial life forms on other planets. All the same, this fantasy world, inspired by the Avatar film franchise, does well to depict the elemental aspects of life as it exists in the very different world of Pandora. As its own land in the park, with plenty to offer in the way of attractions, shopping, dining, and entertainment, you can end up spending a whole day here.

Attractions in PANDORA include two premier dark rides and other interactive experiences:

As is the case in all Disney Parks, you can shop around and buy plenty of uniquely themed merchandise novelties. Pandora in particular is host to vastly original, cultural finds. But let’s not forget about food and Pandora’s diverse offerings in this category as well. Delicious finds can be had at both Pongu Pongu and Satu’li Canteen, which offer new worldly perspectives on taste via exotic fusion concoctions in both foods and beverages.

Related: 5 Things You Must Experience in Pandora—The World of Avatar

Disney’s Hollywood Studios may be all about “seeing stars” but for space-enthused Disney fans that come seeking very different star-studded experiences, there are two detoured paths to take—one that leads to Toy Story Land and another that puts you at Star Wars: Galaxy’s Edge.

Toy Story Land is admittedly more about playtime than it is about space exploration, but don’t forget that one of the film franchise’s primary players happens to be Buzz Lightyear—an astronaut, who we previously mentioned when profiling Tomorrowland. And for a space-interested Disney Fanatic, who likes to have a little fun, you can’t go wrong in looking for Buzz-themed merchandise and other entailments here. And don’t forget to snag a spot on the uniquely themed Alien Swirling Saucers ride while you’re at it.

Getting a quick space-themed buzz with Buzz is all fine fun, but there’s no doubt that the real space obsession lies at none other than Star Wars: Galaxy’s Edge. Again, like Animal Kingdom Park’s Pandora—The World of Avatar, interests here rest primarily in your level of factual or more fanciful pursuits. But since many interested self-proclaimed space cadets do delight in the Star Wars theme as well, let’s jump right into it!

Star Wars-themed attractions at Hollywood Studios don’t just include the two new signature rides to be found within the land’s limits. From longtime classics to newbies, here are the Star Wars-themed rides you need to experience in the park:

It goes without saying that Star Wars: Galaxy’s Edge is home to some of the most novel Star Wars-themed shopping venues this side of space. Customize your experience by building your own lightsaber, for instance, at Savi’s Workshop. Or assemble your own droid at Droid Depot. Other considerations you need to check out include Dok-Ondar’s Den of Antiquities, Black Spire Outfitters, Creature Stall, First Order Cargo, Toydarian Toymaker, and Resistance Supply. And don’t forget the fun-themed dining that awaits you with options that notably include Docking Bay 7 Food and Cargo, Oga’s Cantina, Ronto Roasters, and that famously known Milk Stand, which is quite obviously the place where you can get a taste for some of that popular blue and green milk you’ve no doubt heard so much about.

In flying through the vast stretches of the Disney “World,” EPCOT Park rules the universe when it comes to celebrating space and other innovations and achievements on just about every level there is. Just stick to Future World as a whole and you’ll find an endless array of elaborate experiences to drive home the most prevalent possibilities. Therefore, it goes without saying that there’s plenty to please your inner space cadet here.

If you’re looking for “spacey” attractions within EPCOT’s famed Future World, we have two obvious recommendations—Spaceship Earth and Mission: SPACE:

EPCOT’s space-themed attributes do not rest solely in its attractions, however, as one of its newest themed experiences is that of a culinary quest. It’s the long-anticipated Space 220 Restaurant and it’s finally open and ready for takeoff! From its signature savory, skyrocketing menu selections to its outer space aerial views, this new table service establishment, themed for being a space station among the stars, delivers on an absolute astronomical and gastronomical experience that’s just out of this world on so many levels. From wittily named menu items to the breathtaking stellar surroundings and panoramic views, a meal here makes for a most celestial celebration unmatched by any other dining venue in any other galaxy. And there’s no better time to come out and experience it all than now, in honor of World Space Week.

There are so many out-of-this-world pursuits awaiting you at Walt Disney World Resort in addition to these starring suggestions. And remember, all space-themed celebrations with Disney are ongoing and not exclusive to this time of year alone. At Disney, each and every day is one to celebrate, especially now with 50th Anniversary Celebrations in full swing for the foreseeable future! Now there’s nothing stopping you from blasting off to new heights in search of adventurous explorations in this Disney “World.”