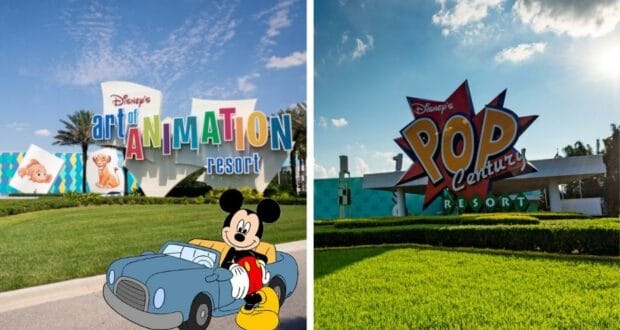 Let’s talk about Walt Disney World’s Value Resort Hotels for a minute. Labeled as such due to their price level, these hotels are the lowest tier of on-property accommodations and have a way of proving that status in their own way.

But there is one Value Resort Hotel that stands out from the crowd: Disney’s Art of Animation Resort. It offers a level of quality that, in my opinion, trumps all of the other value Resort hotels on the matter of its design, fun immersion, and overall quality, among other things.

Situated on the opposite side of a lake sits another of Disney’s Value Resorts: Disney’s Pop Century. Reveling in the turn-of-the-millennium vibes, Pop Century looks back on the second half of the 20th Century. As it says on the Disney World website:

Experience the unforgettable fads of the 1950s through the 1990s all over again. From yo-yos and Play-Doh® to Rubik’s Cube® and rollerblades, this Resort hotel salutes the timeless fashions, catch phrases, toys and dances that captivated the world through the decades. 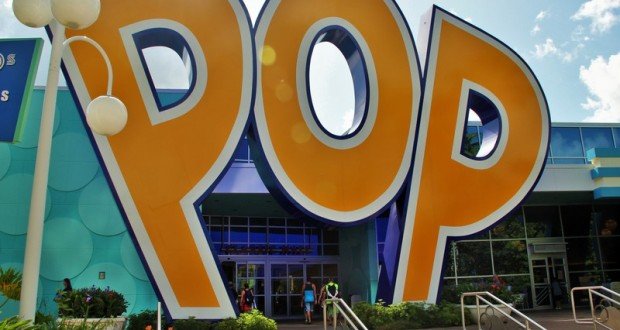 But I am here to say that this fad is so out, and I think the area would be much better suited as the second half of Disney’s Art of Animation Resort.

Art of Animation: Classic, Quality Disney Immersion for the Family 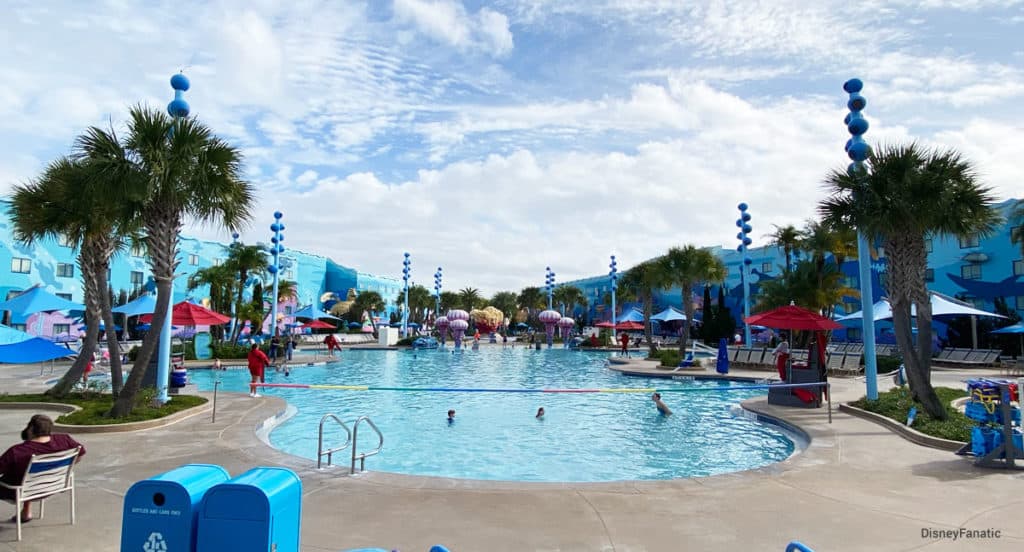 First, let me talk a bit more about Disney’s Art of Animation. It is perhaps the most family-oriented Resort Hotel on property. Most of the rooms are set up suite-style, intended to allow large families to stay together at a more affordable rate designed to match the aesthetic of each movie. Guests can choose between The Little Mermaid standard room or studio, The Lion King family suites, Finding Nemo family suites, and Cars family suites. 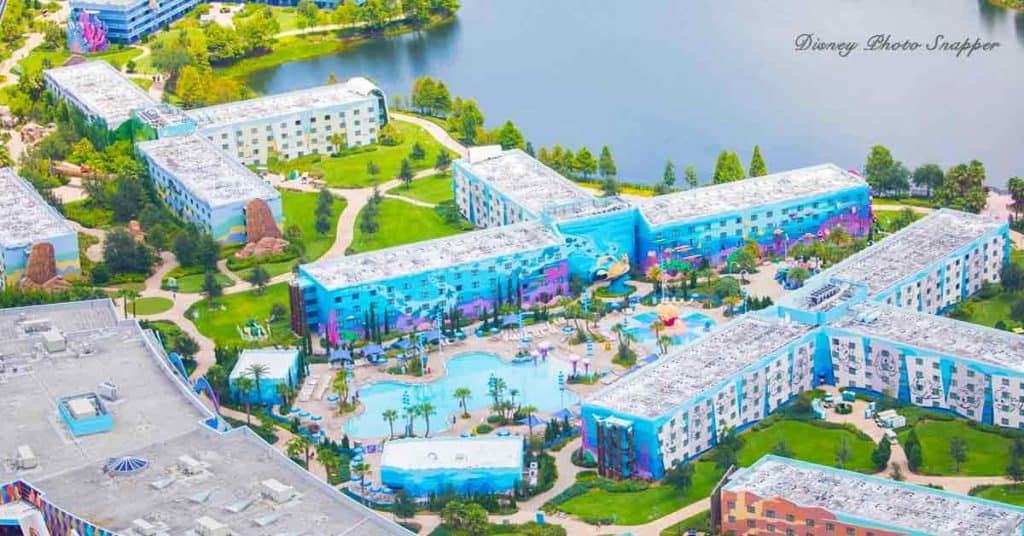 The Finding Nemo pool not only has one of the most underrated pool bars on Disney property, but it is also built to proper scale. Guests are given Nemo’s perspective. Even the palm trees are wavy to appear as if they were underwater. Guests can also take pictures with their favorite characters from Cars over by the Wheel Well, the Cozy Cone, and other spots of Radiator Springs. Kids can run around a play area in the Lion King section, or go swimming at another pool themed after The Little Mermaid. A jaw-dropping spectrum of color dresses the check-in desk, and the walls of the main building, from the gift shop to the quick-service restaurant, are covered in concept art from the featured movies.

Disney World officially describes the Art of Animation Resort as the following:

Be surrounded in the artistry, enchantment and magic of Disney and Pixar movies. Stay at a Disney Resort hotel that invites you to explore the storybook landscapes seen in such classics as Finding Nemo, Cars, The Lion King and The Little Mermaid. From delightfully themed family suites to wondrously detailed courtyards, Disney’s Art of Animation “draws” you and your family in to become a part of some of your animated favorites. 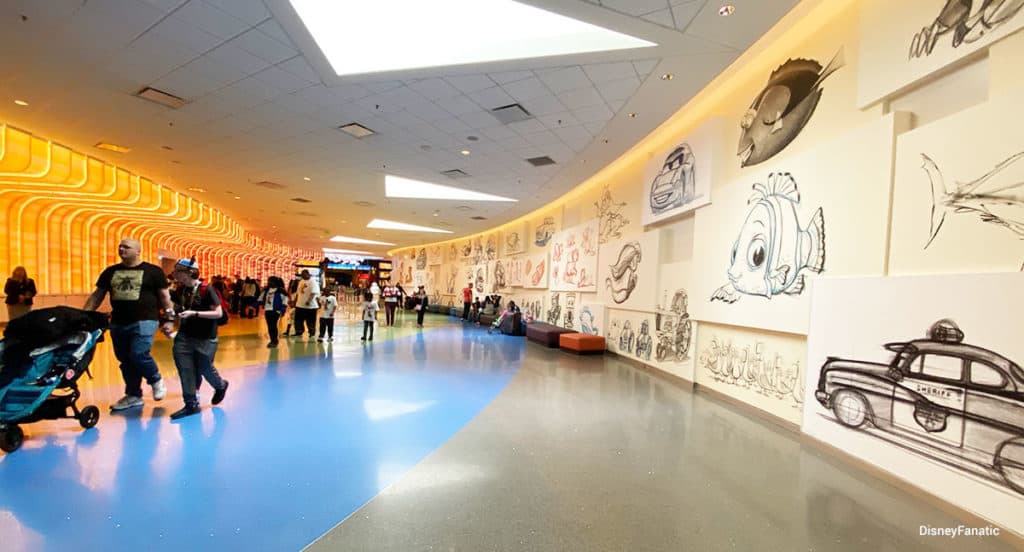 Rather than shoving Disney IP into other themes like All-Star Music and All-Star Sports and the 20th Century, Disney’s Art of Animation is pure Disney and Pixar Animation. But there are so many more beautifully animated movies from both Walt Disney Animation and Pixar that can be included in this fun Resort, and I think it would be a better use of that space if Walt Disney World let Disney’s Art of Animation Resort absorb Pop Century and give Guests new animation options.

Related: Two of a Kind: Disney Resort Twins Around the World

Looking at the map on the My Disney Experience app, we can see that both Art of Animation and Pop Century are part of the same complex surrounding Hourglass Lake near the ESPN Wide World of Sports Complex with almost-mirroring layouts.  Guests can already access either side via the walkway to the Disney Skyliner station or by driving around the parking lot.

When I look at this map, I can see a massive complex dedicated solely to Disney’s magical animation, with one side being an immersion into Pixar’s animated films and the other side being an immersion into Walt Disney Animation. Imagine staying in rooms modeled after Monsters, Inc., Aladdin, and Alice in Wonderland instead of dated, cost-effective throwbacks to the cliches of the 50s, 60s, and 70s. Let’s add a Toy Story wing with Andy’s Backyard-themed play area like what recently opened at Tokyo Disney Resort and a “Neverland”-themed pool with mermaids, the Jolly Roger, and Tick-Tock the Crocodile. 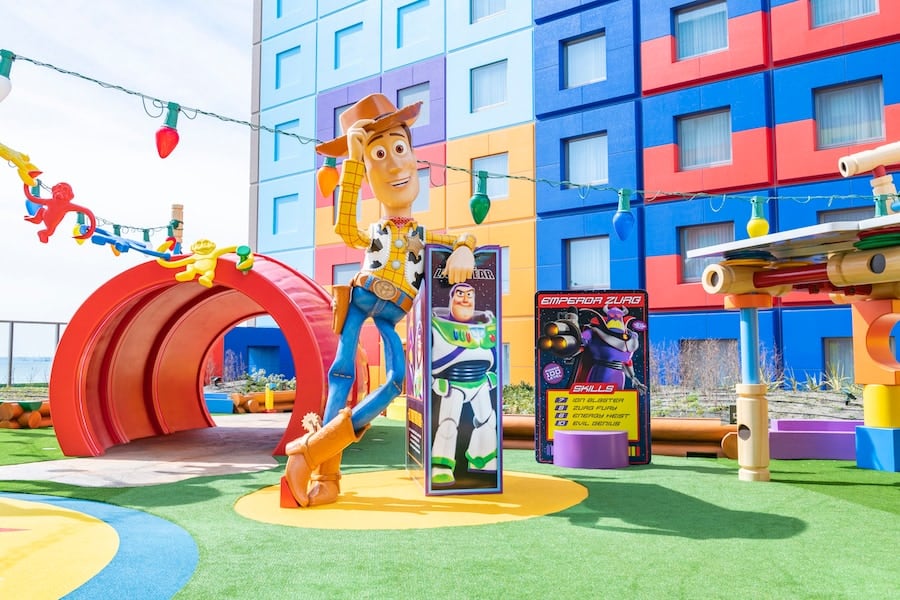 It should be noted at this point that The Walt Disney World Resort has NO plans to replace Disney’s Pop Century Resort with an expansion of Art of Animation. But in my humble opinion, there is so much that can be done to unify that hotel space and bring more animation magic to life.

In the meantime, we at Disney Fanatic will continue to update our readers on actual Disney Park news as it comes to light.