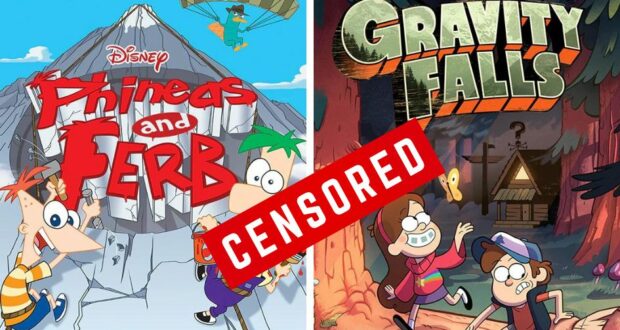 The creator of the Disney Channel show Gravity Falls (a show that ran from 2012 to 2016 and followed siblings Dipper and Mabel Pines as they embarked on supernatural adventures with their great-uncle, “Grunkle Stan Pines”, in a strange town) recently shared a long list of strange revisions and edits that he was told to make when writing the show.

The revisions came from Disney’s Standards and Procedures department, and Hirsch shared a long video citing all of the standoffs he had with that department before he left Disney and moved to Netflix. Now, Phineas and Ferb creator Dan Povenmire has joined in, not only to support Hirsch’s ridicule of Disney censors but also to reveal that he struggled with the same issue while making his own Disney Channel show. On the Disney Channel show ‘Gravity Falls’, Dipper and Mabel Pines are in for an unexpected adventure when they spend the summer with their great uncle in the mysterious town of Gravity Falls, Oregon. Credit: shows.disney.com

Hirsch shared a long video (with voiceover added) exposing real dialogue (via emails) that he’d exchanged with the Disney department. “I wish I had saved mine now”, Dan Povenmire Tweeted in response to Hirsch’s post.

I wish I had saved mine now.

“If I had a nickel for every S&P E-mail I’ve saved I would have 3,000 nickels. It’s a lot of nickels”, Hirsch responded to Povenmire. Apparently, Povenmire’s efforts to resist a long and nitpicky list of revisions from Disney’s Standards and Procedures Department actually gave Hirsch a boost in his own standoff with them! “Phineas had TONS of “adult” humor. I was constantly referencing Candace/Doof lines as precedent to get approval on stuff”, Hirsch shared, referring to two characters from Phineas and Ferb.

Hirsch also recently criticized Disney for adding Gravity Falls to the Disney Pride collection, even though he Tweeted “I still have the Email where Disney explicitly banned me from having LGBTQ characters in Gravity Falls”. “It’s brain-breaking that years later they’re trying to get pride points for this”, the creator of the Disney XD show Gravity Falls added. This, combined with the long list of conservative revisions that the Standards and Procedures department had made (even requesting that Hirsch remove minute details like teddy bears from the show in case they were considered inappropriate or offensive), paints a less than flattering portrait of Disney.