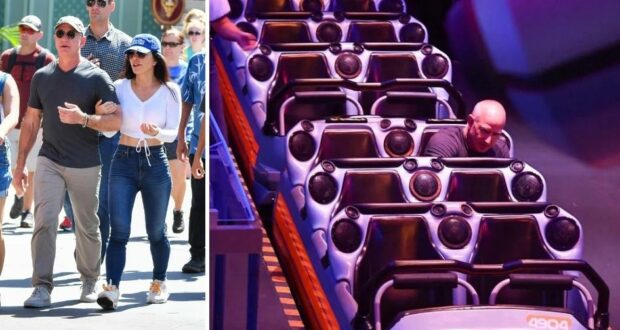 Amazon and Blue Origin founder, Jeff Bezos was spotted having some fun at the Disneyland Resort this week, scoring himself a solo experience on Space Mountain in the process.

The celebrity spotlight was featured by TMZ which gave an exclusive look at the billionaire and his girlfriend, Lauren Sanchez as they soaked up the magic at both Disneyland Park and Disney California Adventure Park. The couple strolled through the Happiest Place on Earth, and its sister park, California Adventure, Wednesday — with bodyguards in tow, naturally — and hit up the classic rides, and some new ones too.

They seemed to enjoy themselves on the Jungle Cruise, Incredicoaster and Grizzly River Run — they didn’t shy away from getting soaked either. Related: Expect to Get Wet With These Disney World Rides and Attractions

Pictures show Bezos and Sanchez enjoying their Disney day, experiencing all of the aforementioned rides as well as Toy Story Mania, and Space Mountain. It appears, however, that Bezos rode Space Mountain completely alone. It is unclear if this was a matter of coincidence or if the Space Tourism magnate wanted an unobstructed experience of the classic space adventure which has the approval of real astronauts. Amazon recently purchased the iconic movie studio MGM, and it features Disney+’s streaming competition Amazon Prime Video. If this story does anything, it proves once again that even the founder and executive chairman of one of Disney’s biggest streaming competitors still cannot resist enjoying at least one magical day at Disneyland every now and then.