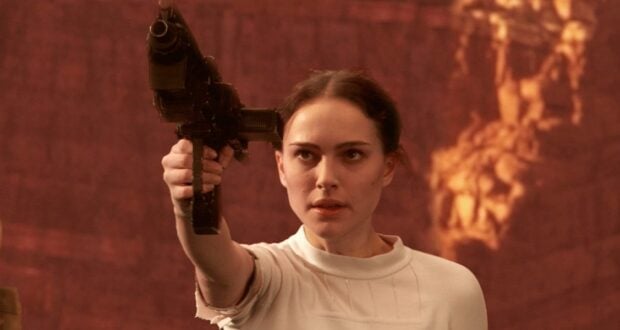 As Star Wars fans, we spend a lot of time appreciating all sorts of characters, whether they’re human, non-human, original, new, or characters worthy of their own TV shows – but today we’re going to spend some time focusing on the best female characters in Star Wars. After all, there are plenty to choose from, but which are the best of the best?

This is of course subjective, but we’ve compiled a list of our personal favorites, and they’re characters who possess admiral qualities and values, along with endearing characteristics. Not all of them are iconic, though – but this is something that can always change over time (and knowing Star Wars, it probably will!).

We’ve also done our best to pick characters that span the Star Wars timeline, whether it’s the prequel trilogy, original trilogy, spin-off movies or shows such as The Clone Wars and The Mandalorian (there’s just so many to choose from)! So here are the best female characters in Star Wars…

There’s no better character to start with than Queen Padme Amidala, played by Natalie Portman. Padme first appears in Episode I: The Phantom Menace and returns in Episode II: Attack of the Clones and Episode III: Revenge of the Sith. In the first film, she is the young, optimistic and resourceful Queen of Naboo, who survives a number of assassination attempts made by separatists. For most of the film, Padme is undercover, posing as one of her own aides.

By the time we get to the second entry, we’ve already jumped ahead by a decade, and Padme is no longer queen – she’s a senator and anti-war spokesperson working at the Galactic Senate on the Republic’s home world of Coruscant. Padme is a formidable opponent in the political arena, and can also hold her own in the field of battle too (she has some pretty impressive blaster skills), as seen in the first two entries and also in Star Wars: The Clone Wars.

As we know, she secretly marries Jedi Knight Anakin Skywalker (which is strictly forbidden) and becomes pregnant with twins. Sadly, when Anakin turns to the dark side in an attempt to save his wife from a death he sees repeatedly in his visions, Padme loses her life during childbirth. Nevertheless, her previous attempts at maintaining democracy within the Republic are admirable, and her spirit lives on through her daughter Leia – and so do her fabulous hairstyles!

Now that we’ve talked about Queen Padme Amidala, the second on our list has to be a princess – who just so happens to be her daughter! Princess Leia Organa (played by the late Carrie Fisher) is an original Star Wars character and has been an icon for generations. She has appeared in six of the Star Wars movies, and at the end of Rogue One: A Star Wars Story (she has even enjoyed a small role in Star Wars: Rebels).

When we first meet this royal rebel in Episode IV: A New Hope, she stands up to the fearsome Darth Vader, unafraid to challenge the evil Sith Lord (while also being unaware that he just so happens to be her father!). After fans saw the prequel trilogy (1999 – 2004), it was plain to see that Leia is just like her mother Padme – a worthy opponent both in and outside the political arena. In the sequel trilogy, Leia is a war general and a legend among the rebel fleet.

As we all “know” (pun intended), Leia falls in love with charismatic smuggler Han Solo. While things don’t necessarily work out for them between the events of Episode VI: Return of the Jedi and Episode VII: The Force Awakens, they do end up having a son in the form of Ben Solo (although he does end up becoming an evil tyrant who kills his own father!) The only crime Disney has committed against this character is not making her an official Disney Princess!

There’s no denying that there’s still a lot of controversy surrounding this character, given that actress Gina Carano was fired by Disney and Lucasfilm following a number of tweets she made earlier this year, but we’re here to talk specifically about the character of Cara Dune only. It would be such a shame for the ex-shock trooper to be lost and forgotten in the sands of time because of things that have happened on the other side of the screen.

Fortunately, we got to see quite a bit of Cara Dune before Carano’s departure from The Mandalorian, as she’s a recurring character throughout the show. And since her first appearance, she made quite the impression on fans, with her tough-but-tender attitude, which in many ways led her to becoming Grogu’s surrogate aunt! With that said, Cara Dune is a surrogate aunt second, and a hard-as-nails solider first, having fought in the war against the Empire.

In the show, we first meet Cara Dune as a mercenary – her days as a solider are over, but she remains a formidable fighter. As Season 2 went on, it became increasingly obvious that Disney and Lucasfilm had plans for Cara Dune to appear in live-action show Rangers of the New Republic, however, that show was cancelled. Given the controversy, it’s unlikely Carano will reprise the role, but that doesn’t mean the character can’t be recast, or appear in animated form.

Jyn Erso is a character who doesn’t really tend to pop up in conversations between Star Wars fans, even if the film she’s in does. Rogue One: A Star Wars Story is one of the very few Disney-made Star Wars movies people actually enjoy, which is no surprise considering it serves as a direct prequel to A New Hope. It’s also pretty good too – and it’s easily the grittiest film in the entire series so far, feeling more like a war movie than any other entry.

Jyn Erso (played by Felicity Jones) is the main character of that film, a reluctant rebel who joins the Rebel Alliance in an attempt to acquire the plans for the Death Star, which has the power to wipe out entire planets. But during her mission, she learns that her father Galen Erso is the man who built the weapon, having been forced to do so by the Empire. It’s fair to say her character has a lot to deal with, and has some pretty difficult decisions to make along the way.

While Jyn has only ever appeared in the spin-off, she is easily one of the bravest Star Wars characters, as she ultimately gives her life to protect the galaxy, along with her fellow rebels. She might be a somewhat quiet character, but her actions speak louder than words. We can only ‘hope’ that she appears in future Star Wars material, and with the live-action series Andor due for release in 2022, never say never. After all, just like rebellions, fandoms are built on hope!

Ahsoka Tano is easily one of the best female Star Wars characters, and we think many fans would agree. This wasn’t always the case, though – when she first appeared in animated movie Star Wars: The Clone Wars, fans didn’t take to her so well – she was quite snarky and perhaps a little on the obnoxious side. But in her defence, she was a young Padawan under the tutelage of Anakin Skywalker, and the show was yet to flesh out just what kind of character she was.

Ahsoka quickly becomes one of the leading characters (in many ways, she’s the figurehead of the show). While she takes a bit of a hiatus after leaving the Jedi Order, we still get to witness her entire character arc, during which she grows from a young Padawan to an incredibly skilled Jedi Knight. In fact, it’s fair to say that she might just be the most capable Jedi when it comes to lightsaber and Force-wielding skills!

Ahsoka is an extremely compassionate individual and is also cunning and resourceful. While she appears to be far more resilient upon her return to the show, and even in The Mandalorian, boasting a tougher exterior, we still get to see her more compassionate and vulnerable side in the final four episodes of The Clone Wars, during which she does everything she can to not put any of the clones in harm’s way, despite the fact Order 66 has been executed.

There are of course many more great female Star Wars characters, such as Sabine Wren and Hera Syndulla from Star Wars: Rebels, Omega from Star Wars: The Bad Batch and Lop from Star Wars: Visions. But our ‘fab five’ happens to include the best of the best. Not only have these characters been through a lot during their time in the faraway galaxy, they’re also great role models for people in our own galaxy!