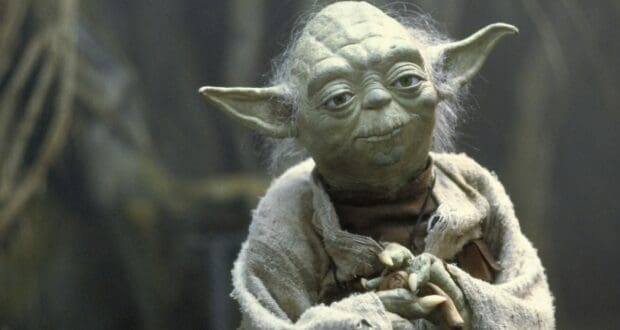 There are so many human Star Wars characters that it’s easy to forget about the alien variety. After all, the faraway galaxy is made up of countless star systems, each with their own vast number of planets, with most of them inhabited by different sentient alien races. And there are so many – Wookie, Trandoshan, Twi’lek, Togruta, Gungan, Hutt, Ugnaught, Mon Calamari, Asogians (that’s E.T. The Extra Terrestrial!) – the list goes on!

That barely scratches the surface – there are pages upon pages on the Internet and even various encyclopedias listing all of the different species that populate the galaxy, including all of the non-sentient ones like the rancor! But who are the best non-human characters in the Star Wars universe? We always talk a great deal about the likes of Luke Skywalker, Han Solo, Princess Leia, Rey, and Kylo Ren, but which ‘alien’ characters deserve just as much attention?

Buckle up as we jump to hyperspace and visit the faraway galaxy, where we will hand-pick our favorite non-human Star Wars characters!

The character Hera Syndulla from the animated show Star Wars: Rebels is a no-brainer. Pilot to the Ghost and member of the crew of the same name, Hera is a female Twi’lek and hails from Ryloth. Even as a young girl, Hera is pivotal in opposing the Empire, but winds up leaving her planet to become a pilot. However, she doesn’t anticipate that she will pave the way for what will become the Rebel Alliance, which will ultimately defeat the galactic dictatorship.

Hera has also appeared in Star Wars: The Bad Batch (voiced again by Vanessa Marshall), and while we’ve yet to see her in live-action, she is name-dropped in Rogue One: A Star Wars Story. She was set to appear in the live-action show Rangers of the New Republic, but the project was cancelled indefinitely. After Rebels, the incredibly talented pilot goes on to become a high-ranking figure in the Resistance and was present at both the Battle of Hoth and Battle of Endor.

We can’t think of anyone who doesn’t love Chewbacca – Han Solo’s tall, loyal and hairy companion. Chewbacca – more affectionately known as ‘Chewie’ – is a Wookie from Kashyyk, a tropical jungle planet whose inhabitants dwell in sophisticated wooden structures. Wookies are typically tall, intelligent, and great warriors in the field of battle. Chewbacca, however, while indeed a great fighter, is also extremely cuddly and oftentimes emotional!

Chewbacca has appeared in many forms of Star Wars media, and to date seven of the movies, as well as Star Wars: The Clone Wars. He is easily among the most recognized Star Wars characters and is totally synonymous with his co-pilot and lifelong friend Han Solo. He is played by Peter Mayhew in the original trilogy and prequel trilogy, and by Joonas Suotamo in the sequel trilogy and Solo: A Star Wars Story.

Astromech unit R2-D2 (often abbreviated or shortened to ‘Artoo’ by fellow characters) is a criminally underrated Star Wars character. And while he isn’t alien, he is of course non-human, which makes him qualify for this list just like any of the others. R2-D2 is among the original line-up of Star Wars characters – Luke Skywalker, Princess Leia, Han Solo, Yoda, Darth Vader, Obi-Wan Kenobi, Chewbacca, Boba Fett and fellow droid C-3PO.

Like those other original characters, he has appeared in countless forms of Star Wars media, including eleven of the Star Wars movies (he has a small cameo alongside C-3PO in Rogue One: A Star Wars Story) and The Clone Wars. R2 might be a droid, but not only is he incredibly useful when it comes to repairing and operating ships, he’s very loyal to his master, whether that’s Anakin, Luke, or Rey. And his wild screams are easily his most adorable quality!

Related: 5 Star Wars Characters Who Deserve Their Own TV Shows

We could probably talk forever about the character of Ahsoka Tano, who has become one of the most iconic Star Wars characters in just 13 years since her debut in Star Wars: The Clone Wars. The female Togruta comes from the planet Shili, but very little is known about her time as a child there. From a young age, Ahsoka trains as a Padawan with the Jedi Council on Coruscant and eventually becomes Anakin Skywalker’s apprentice.

Ahsoka is a major figure in the Clone Wars, serving as both a Jedi and a General to her own company of Clone Troopers. Throughout the show, we see her grow into a courageous young woman and formidable Jedi Knight. Ahsoka has since appeared in Rebels, The Mandalorian, and will soon be getting her own live-action show. In the animated shows, Ahsoka is voiced by Ashley Eckstein, while Rosario Dawson is bringing her to life in live-action.

We feel like we’d be breaking some kind of unwritten Star Wars law if we didn’t include Jedi Master Yoda on this list. But that’s not the only reason we’ve decided to include him – he’s among the richest Star Wars characters out there, which is no surprise considering he’s around 800 years old! While his species remains unknown to this day, he is probably the best-known Star Wars character of all, even more so than Luke Skywalker.

It’s probably his green complexion and big ears, and also his dialect, that make him truly unique. But even beyond those surface-level qualities, Yoda is a ‘force’ to be reckoned with. Not only does he play a huge part in the Clone Wars, in which he goes head-to-head with the Emperor, but he also trains Luke Skywalker in the way of the Jedi. As a Jedi Knight, Yoda is wise and enlightening, and as a retired old man in exile, he’s actually pretty funny!

We can’t have Yoda on our list without featuring little Baby Yoda too! Okay, he’s not actually a baby version of Yoda, but that’s the name the Internet gave him during the early days of the hit live-action Star Wars show The Mandalorian. In Season 2, we learn that his real name is Grogu – which admittedly is nowhere near as catchy as Baby Yoda. Nevertheless, Grogu is the same species as Yoda – whatever that is (and it seems we may never find out).

Grogu is incredibly Force-sensitive and trained with the Jedi Council on Coruscant, before and during the time of the Clone Wars. While he has never been seen in any other Star Wars canon, and has apparently left The Mandalorian behind following that epic Season 2 finale, we’re pretty sure we haven’t seen the last of this little bundle of joy. And from what we’ve seen so far, it’s likely that he’ll grow into a powerful Jedi (in a few hundred years, of course).

If there’s any kind of character we love, it’s one that brings some much-needed heart and soul to Star Wars – and Kuiil definitely falls into that category. The Ugnaught appears in The Mandalorian Season 1, and is discovered by Din Jarin in the hills of Arvala-7 where he is living in retirement from the war, during which he worked in servitude for the Empire (something he deeply regrets). Over the course of the show, both characters become allies and friends as they protect Grogu.

Kuiil is easily one of the best things about The Mandalorian. He’s wise, kind, clever, and also shares some similarities with Yoda. The Ugnaught’s arc in the show continues the themes of parenting, as he’s able to reprogram the hunter droid IG-11 into a nanny so that he can protect Grogu from harm. Sadly, Kuiil dies while protecting the child himself, but we can only hope he shows up in future Star Wars material.

These are our favorite non-human Star Wars characters – they’re rich, interesting, and have given us some of the best Star Wars we could have asked for. We have spoken!