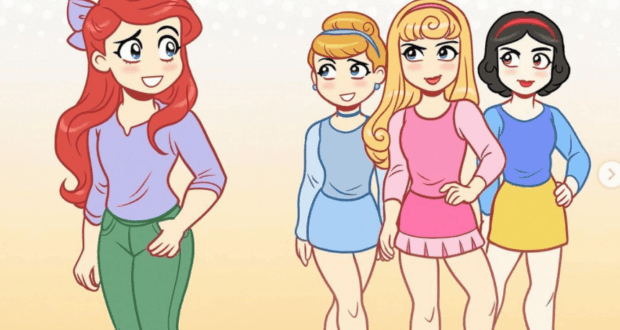 Although the influencer Blogilates (real name Cassey Ho) is a Los Angeles celebrity who is known for her Disney-inspired Pilates workout videos, the Pilates fitness instructor and activewear designer has also gained a following for her Disney-inspired comics–and there was a new addition to the comic series during the Christmas season!

The Blogilates comics are cleverly called Blogicomics, and many of the most popular comics in the series involve modern versions of Disney characters. Since Blogilates is a fitness instructor, it makes sense that many of the comics involve adapting a Disney character’s themes and storyline to suit his or her workout! But there have also been some Blogicomics that take place outside the gym–and one series within the comic series that’s been gaining traction is the Blogicomics version of Mean Girls (2004). 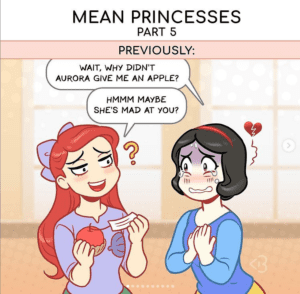 So far, the comic has basically followed the Mean Girls plot exactly: a new girl (Ariel, in this case) arrives in a high school with a strong clique culture that’s dominated by three girls. Blogicomics has adapted these three girls into the classic Disney princesses Cinderella, Snow White, and Aurora, which has actually been the norm many times when the Disney princesses are moved into pop culture settings. 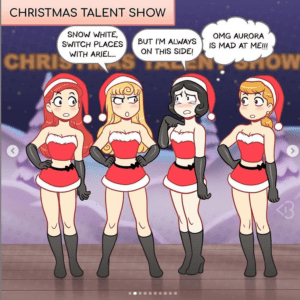 The comic also seems to be directly inspired by the viral Youtube video (shown below) that told a similar tale: Aurora was the lead mean girl, with Ariel being the naive new girl. When Aurora and Ariel start to clash over the same guy (Prince Eric), Ariel teams up with Maleficent to become one of the mean girls and undo the clique system from the inside (while embarrassing Aurora in the process). 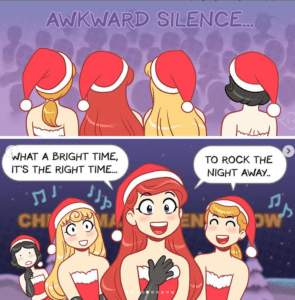 As usual, illustrator Daniel Kordek does an excellent job when it comes to portraying the classic Disney princesses in a modern, but still animated setting. Cassey Ho, the woman behind Blogilates, has been creating these “Blogicomics” with Daniel Kordek for years now. Aside from the ongoing Mean Girls series, the Disney and Marvel references in the duo’s comics have included Avengers’ workouts, a Cinderella shopping trip, Disney villain workouts, and workouts with Disney princesses like Elsa, Rapunzel, and Belle!

Aside from Blogicomics, Cassey Ho Vinh (aka Blogilates) is mainly known for her Pilates workout expertise, her fitness videos, her Youtube channel with workouts (including Disney workouts), her healthy lifestyle, her Popflex Active activewear, and her knack for introducing her fans to plant-based recipes with ingredients like oat milk (or rice milk or almond milk) and other ingredients from stores like Trader Joe’s. Have you ever tried a Blogilates workout to exercise more or tried a Blogilates recipe to match your exercise?